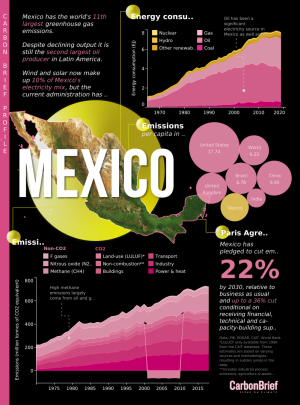 As of 2020, Mexico's per capita CO2 emissions from fuel combustion (3.0 tons annually) were the third highest in Latin America and the Caribbean, though still relatively small by international standards, ranking only 52nd globally.[4] Mexico's NDC (Nationally Determined Contribution) plan calls for a 22% reduction in GHG emissions and a 51% reduction in black carbon emissions by 2030.[5][6]

Between 2017-2023, Mexico is undergoing a trial period with an Emissions Trading System (ETS).[7]

In October 2021, President Lopez-Obrador announced a new reform initiative which "[gives] the CFE its place" by giving CFE 54% of the market and maintaining the other 46% for private companies.[8] The reform is part of the President's larger plan to move towards nationalization of the energy marketplace in Mexico and is a response to the 2014 Energy Reform package.[9][10] Representatives of the renewable energy sector in Mexico argue that the reform would "dismantle the renewable energy industry" by prioritizing "dirty and more expensive" forms of energy.[11] Critics also stated that taxpayers can expect to foot the bill for the return to the centralized energy model.[12]

In April 2022, AMLO's bill to guarantee 54% of Mexico's electricity market to CFE fell short of the necessary two-thirds majority vote.[13][14] However, due to the support around the failed constitutional change even though the energy sector remained open to the private sector Mexico is now viewed as largely unattractive to most investors. Many Mexican citizens view the non-passage of the bill as a defense of transnational companies.[15]

SEMARNAT (Secretaría de Medio Ambiente y Recursos Naturales) is Mexico's main environmental authority, responsible for all aspects of environmental policy. Power plants and other large industrial projects are required to obtain a LAU (Licencia Ambiental Única) from SEMARNAT as a precondition of operating.[16]

CFE maintains a website with information on Mexican energy tenders.

State-owned Pemex (Petróleos Mexicanos) is one of Latin America's two largest petroleum companies.[18][19] It is involved in on- and offshore oil and gas development, including exploration, production, refining, and distribution.

Iberdrola, Naturgy, Sempra Energy, Fermaca, and TC Energy are among the largest private developers of energy projects in Mexico.

Mexico consumed 271 TWh of electricity in 2018, ranking 14th in the world and 4th in the Western Hemisphere, behind the United States, Canada, and Brazil.[20] 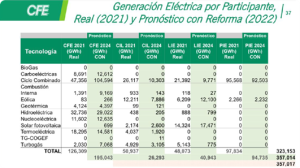 Coal development in Mexico is concentrated in the northern state of Coahuila, which accounts for 99% of national production.[21][22] Mexico produced just over 11 million short tons of coal in 2019, ranking 23rd globally.[20]

2021 studies have proposed the closure of multiple coal plants and to reroute resources for economic diversification.[24]The Program for the Rescue and Economic Diversification of the Coal Producing Region intend to reprioritize the actions of the local government to help protect the economic viability of the region as coal becomes a more controversial topic.[25][26]

Despite having its own domestic production, Mexico must still import coal to supply its three large coal-fired power plants: Carbon II, José López Portillo, and Petacalco.[21] Coal is mostly sourced from Australia, Colombia, Canada and the United States.[27]

A new US$1.2 billion, 1400 MW coal-fired power plant has long been proposed for Coahuila state.[30][31][32] However, in November 2021 a top official of CFE (Mexico's federal electricity commission) stated that Mexico had no active plans to build any new coal plants,[33] which was reiterated in April 2022 at a meeting between Mexican president Andrés Manuel López Obrador and U.S. representative John Kerry.[34]

Mexico produced 1.94 million barrels per day of petroleum and other liquids in 2020, ranking second in Latin America and the Caribbean (after Brazil) and 12th in the world.[20] In 2019, the country produced 34 billion cubic meters of dry natural gas, ranking third in the region (after Argentina and Trinidad and Tobago).[35]

The projects which would continue to support Mexico's steady consumption of oil and natural gas are contentious.[36] 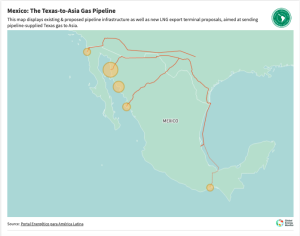 Mexico is the world's 7th largest importer of natural gas. Imports, which come mostly from the United States, totaled nearly 1.9 trillion cubic feet in 2018.[20] Thanks largely to the expansion of the US-Mexico pipeline system, imports have grown sharply over the last decade, and in 2018 imports surpassed domestic production for the first time to become Mexico's primary source of natural gas.[3] In 2021, natural gas imports from pipelines connecting with the United States accounted for 70% of Mexico's total gas supply (compared to 40% in 2015).[37]

Mexico's proposed Corredor Interoceánico, a massive, multi-faceted project linking Mexico's Gulf and Pacific coasts via the Isthmus of Tehuantepec, is slated to include significant expansion of the Jáltipan-Salina Cruz Pipeline, modernization of the Minatitlán and Salina Cruz refineries, and construction of major new infrastructure including the Salina Cruz LNG Terminal, the 812 MW Cogeneración Salina Cruz power station, and a deep draft port capable of serving large oil tankers in Salinas del Marqués.[42][43][44][45] Another major project announced in 2022, the Southeast Gateway Gas Pipeline, would significantly expand gas transport capacity between central and southeastern Mexico.[46]

Pipeline projects face opposition from activist and indigenous groups, which investors fear can pose a threat to new pipelines or pipeline expansions.[37]

Spanning more than 17,000 kilometers, Mexico's network of natural gas pipelines is the second most extensive in Latin America (after Argentina's) and the ninth largest in the world.[47] Mexico has substantially increased imports of natural gas from the United States in recent years via the Sur de Texas-Tuxpan Gas Pipeline and the Wahalajara pipeline network, which includes the Ojinaga-El Encino, El Encino-La Laguna, La Laguna-Aguascalientes, and Villa de Reyes-Aguascalientes-Guadalajara gas pipelines. Mexico also imports natural gas via the Altamira, Costa Azul, and Manzanillo LNG terminals, and is slated to begin exporting LNG in 2024 via the new Costa Azul Export Terminal. 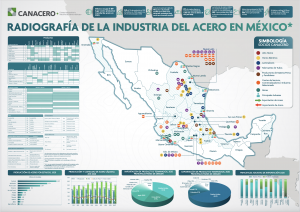 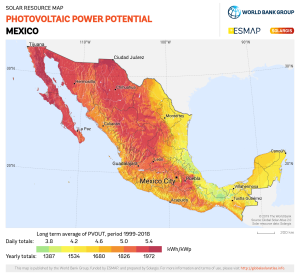 The government of Andrés Manuel López Obrador has strongly favored domestic fossil fuels over renewables, posing challenges to clean energy development. Mexico has set lofty goals for including renewables in its energy mix - 35% by 2024, 40% by 2035, and 50% by 2050 - but appears unlikely to achieve these targets.[49] Mexico has some of the highest levels of solar radiation on earth, making it a prime candidate for photovoltaic energy projects.[49] During 2020, renewable energy investment was greatly hindered by the actions of CENACE.[50] Distributed solar generation is important to Mexico reaching its renewable energy goals.[51]

The October 2021 shift to a centralized energy model has put solar and wind energy lowest in the hierarchy of priorities as they are principally in the hands of private suppliers.[12] As of early 2022, the majority of wind generation in Mexico was held by five private companies and the majority of solar by six private companies.[52] Solar and wind farms have received pushback from indigenous communities who say the projects do not account for the needs of the local populations nor the flora and fauna.[53] Activist group are in support of renewable energy, but not the megaprojects which take advantage of a community and the intimidation tactics being used to coerce community officials.[54]

Geothermal energy in Mexico has large potential but is largely unexplored. The Cerro Prieto geothermal field is among the largest geothermal generating stations in the world.[55]

By 2028, Mexican renewables are projected to reach nearly 20GW- 59% from wind and 21% from hydro.[57] However, the Insituto Mexicano para la Competitividad argues the move to renewable energy sources is still insufficient to meet their energy transition commitments.[58]

Research released in 2022 shows that there are 82 viable locations for lithium mining within Mexico.[59] As of April 2022, contracts assigned for lithium exploration and exploitation require special review as part of President AMLO's goal to keep lithium as "property of the Nation".[60][61]

Mexico's older, larger power plants -- including the coal-fired José López Portillo, Carbón II, and Petacalco and the gas-fired Manzanillo power station - are notoriously heavy polluters associated with numerous environmental, health, and safety concerns.[27][62][63] The Corredor Interoceánico del Istmo de Tehuantepec, a proposed mega-project designed to facilitate transfer of natural gas and other resources between Mexico's Gulf and Pacific coasts, has provoked sustained protests and blockades due to the developers' failure to consult with indigenous communities or obtain permission to enter their lands.[64][65][66]

EJ Atlas maintains an interactive map with energy-related infrastructure with a layer for points of conflict.

Retrieved from "https://www.gem.wiki/w/index.php?title=Energy_profile:_Mexico&oldid=360155"
Categories:
This page was last edited on 3 October 2022, at 15:50.
Content is available under Creative Commons Attribution-NonCommercial-ShareAlike unless otherwise noted.
Privacy policy
About Global Energy Monitor
Disclaimers