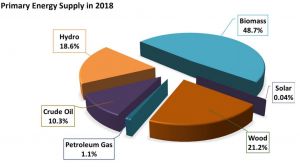 As of 2019, Belize generated 45% of its energy from non-renewable sources, supplemented by significant amounts of energy from indigenous renewable resources such as hydro power.[1][2] 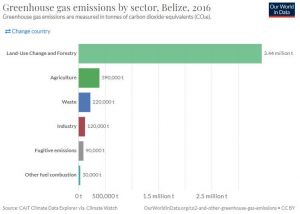 As of 2019, oil was responsible for 99.99% of greenhouse gas emissions in Belize.[3] Belize was following the NCCPSAP (National Climate Change Policy, Strategy, and Action Plan) from 2015-2020.[4] Belize intends to be using 85% renewable energy by 2030 through energy diversification while also improving electricity transmission infrastructure to prevent electricity losses.[4]

The Belize Energy Unit is responsible for the production, delivery, and use of energy in Belize.

Belize does not have a government supported oil company.

BNE (Belize Natural Energy), the only oil company in Belize, is backed by Irish investment primarily.[7][8]

As of 2020, 15.7% of those employed in Belize worked in the industry sector which is comprised of mining, quarrying, manufacturing, construction, electricity, gas, and water.[9]

Belize does not produce, consume, import, or export coal; the country has no coal reserves.[12]

Mexico is the primary source of imported petroleum products.[11]

All petroleum in Belize moves via tanker trucks to the deep water port because there are no pipelines or rail systems.[13]

Belize is using the Sustainable Energy Action Plan 2014-2033 to guide renewable energy diversification.[4] The focus for renewable investments are hydropower and biomass.[2]

Belize has no iron ore deposits.[14]

The gaps in Belize's collection of data on energy statistics is problematic for understanding institutional and regulatory deficiencies.[11] Exploitation of crude oil in Belize comes at a high cost to the environment, jeopardizing the livelihoods of many who work in the agricultural and tourism sectors.[15] In 2018, Belize became the first country in the world to reject all offshore oil in order to protect the coral reefs that are essential for the tourism sector and well-being of the environment.[16]

Retrieved from "https://www.gem.wiki/w/index.php?title=Energy_profile:_Belize&oldid=252211"
Category:
This page was last edited on 22 June 2021, at 18:42.
Content is available under Creative Commons Attribution-NonCommercial-ShareAlike unless otherwise noted.
Privacy policy
About Global Energy Monitor
Disclaimers