Sithe Global Power, LLC, based in New York, NY, is an international development company involved in the construction, acquisition and operation of electric power generation facilities. The company began as Sithe Energies, Inc. in 1968 and has since become one of the largest power producers in the United States. Sithe has developed over 50 power plant projects in nine countries with a capital investment of over $5 billion.[1]

In 2005, Blackstone Capital Partners, an affiliate of The Blackstone Group, purchased an 80 percent share of Sithe Global Power from the Reservoir Capital Group, which retained 20 percent ownership. 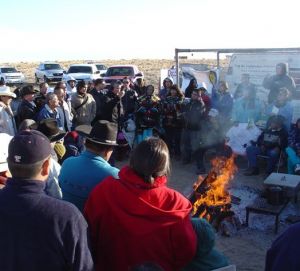 On December 12, 2006, members of the Diné tribe blockaded a road leading to the planned site of the Desert Rock coal-fired power plant near Farmington, New Mexico, in protest of Sithe Global Energy's failure to fully consult with members of the community. Ten activists with the group Dooda Desert Rock set up a campsite on the road. On December 22, under threat of arrest, the campsite was moved to a nearby location, and company vehicles were once again able to access the site. This second campsite has been continually occupied ever since. No arrests have been made.[4][5][6]

Retrieved from "https://www.gem.wiki/w/index.php?title=Sithe_Global_Power&oldid=241195"
Categories:
This page was last edited on 30 April 2021, at 11:24.
Content is available under Creative Commons Attribution-NonCommercial-ShareAlike unless otherwise noted.
Privacy policy
About Global Energy Monitor
Disclaimers