The plant is located on Barry in the Vale of Glamorgan, on the north bank of the Bristol Channel.

In September 2014 RWE said it was opting out of the Industrial Emissions Directive (IED) for Aberthaw, and would enter the plant into the Limited Life Derogation, which means it can run for 17,500 hours from 1 January 2016 or until the end of 2023 without upgrades to cut SO2, NOx and particulate emissions.[2]

In February 2016 it was reported that RWE was attempting to get payments from the capacity market auction for consumers to subsidize Aberthaw during 2019-2020, so that it could stay open in case energy demand is high.[3]

In April 2016 it was reported the plant will only generate electricity when needed, such as in the winter months, starting April 2017.[4]

Aberthaw was due for closure until RWE nPower agreed to install new technology to reduce sulphur dioxide emissions by 90% by 2008.[7] RWE npower made the decision to fit Flue Gas Desulphurization (FSG) technology in June 2005, to enable the station to operate under new European environmental regulations from 2008. Construction started on June 21, 2006.[8]

In 2015 the European Commission announced it was taking the UK Government to court because the pollution emitted by Aberthaw is well above legal limits, pumping out more than double the legal amount of nitrogen oxides (NOx) for seven years.[3] 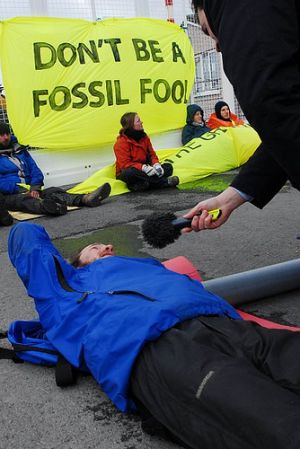 Activists blockade the front gates of the Aberthaw power station in South Wales on April 3, 2008.

On April 3, 2008, as part of the Fossil Fools International Day of Action, members of Bristol Rising Tide occupied the Aberthaw coal-fired power plant in South Wales. Activists entered the facility, chained themselves to conveyor belts, and occupied several buildings; others locked themselves to the facility's front gates. The action was in solidarity with the Ffos-y-Fran mine construction site in South Wales; coal from Ffos-y-Fran will be used to fuel Aberthaw for 17 years. Police arrested 11 people.[9][10]

On Monday 26 April activists associated with Rising Tide blockaded the railtrack which carries coal from the opencast mine at Ffos-y-Fran in Merthyr Tydfil in Wales to Aberthaw B Power Station in South Wales. It took the combined efforts of British Rail Police and South Wales Police over 8 hours to remove the last of the protesters. According to a press release from Rising Tide, 18 People from Bristol and Bath were charged under the Malicious Damages Act of 1861, a law to protect the interests of 19th Century rail owners. If convicted they face anything up to a life sentence in prison.[11]

It has recently been proposed that the plant could be replaced by a power station using nuclear energy. [12].

In November 2009, RWE announced that it intended to submit a planning application for a 3MW Carbon Capture and Storage (CCS) plant at Aberthaw, which it boasted "will be at least eight times the size of existing 'post-combustion' projects in the UK and operate for twice as long." The announcement coincide with the decision of the PECCS joint venture, of which RWE npower is a member, to withdraw from the bidding process for the UK government's Carbon dioxide Capture and Storage Competition for demonstration CCS projects.[13]

Wikipedia also has an article on Aberthaw B Power Station. This article may use content from the Wikipedia article under the terms of the GFDL.

Retrieved from "https://www.gem.wiki/w/index.php?title=Aberthaw_B_Power_Station&oldid=196150"
Categories:
This page was last edited on 1 April 2020, at 18:56.
Content is available under Creative Commons Attribution-NonCommercial-ShareAlike unless otherwise noted.
Privacy policy
About Global Energy Monitor
Disclaimers