The Bakken formation is a rock unit from the Late Devonian to Early Mississippian age occupying about 200,000 square miles (520,000 km2) of the subsurface of the Williston Basin, underlying parts of Montana, North Dakota, and Saskatchewan.

North Dakota's total oil production has approximately tripled since 2005 due largely to development of the Bakken formation. The Bakken is a shale oil deposit. It is considered to be light-sweet crude oil, trapped 10,000 feet below the surface within shale rock. Bakken shale consists of three layers, an upper layer of shale rock, a middle layer of sandstone/dolomite, and a lower layer of shale rock. The middle sandstoen layer is what is commonly drilled and fracked. 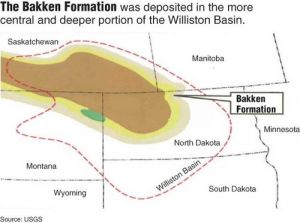 For the past 60 years North Dakota has been an oil producing state. However, in recent years the state has seen a boom in the state's Bakken region. As such, North Dakota has become the fourth largest oil producing state in the country and one of the largest onshore plays in the United States. The Bakken shale formation extends beyond North Dakota into Eastern Montana and neighboring territories of Saskatchewan and Manitoba to the north in Canada. While its success has been largely attributed to advances in oil field technology, primarily horizontal drilling and hydraulic fracturing, it has been argued that a number of circumstances have come together to make the Bakken a successful oil play, including high oil prices, widespread and ready access to privately held prospects, and low natural gas prices.[4]

Horizontal drilling in North Dakota's area of the Bakken began in the 1980s, but was not widely used until the last decade. In the early 2000s Bakken developers began drilling horizontal laterals into the Middle Bakken formation, the sandstone layer between the two shale layers. Over the past several years fracking in the Bakken has increased dramatically. While this increases the cost of drilling, it also increases initial production rates and the ultimate recovery of oil from the well.[5]

The first commercial Bakken well at Elm Coulee which is located in Richland County, Montana. The well was completed in 1981 by Coastal Oil and Gas. As of 2007 The total number of horizontal Bakken wells drilled in the Elm Coulee area was more than 500 and included more than 800 lateral drill locations.[6]

An industry report released in 2012 by Bentek Energy stated that the Williston Basin's production of natural gas is expected to grow nearly sixfold, to 3.1 billion cubic feet per day, by 2025.[7]

The fiscal 2013 energy and water budget proposed by Republicans in April 2012 on the House Appropriations Committee includes $554 million, a $207 million increase from 2012, for the Department of Energy to develop technologies for the use of coal, natural gas, oil and other fossil fuels. That sum includes a new $25 million line item for the development of oil shale, such as the tight oil in the Bakken formation of North Dakota.[8]

Wells have been drilled along the Bakken formation in Montana with active wells already producing oil in North Dakota. Experts say oil appears to extend from the Bakken formation of eastern Montana into Alberta, and south to the foot of the Rocky Mountains. It has been reported that hydraulic fracking will likely be required to extract the oil, if it is found. Land leases for fracking in the region have increased dramatically in recent years.

The state Industrial Commission said crude production in September 2011 totaled 464,122 barrels a day, or nearly 123,000 more barrels than September 2010. Ron Ness, president of the North Dakota Petroleum Council, said the state should end 2011 with about 150 million barrels of oil produced.[14]

Bakken producing zones are mainly present in Western North Dakota, Southern Saskatchewen, and Eastern Montana. The Bakken is one of the largest (possibly the largest) continuous oil accumulation in the world. It is an over pressured system which is in part responsible for high IP rates. The high pressure is in the formation suggests that the oil is contained within the petroleum system. This means that the oil remains in place and is tightly contained throughout the geologic structure.[5]

In April 2013 a government study doubled its estimates for the Bakken's recoverable crude supplies. The U.S. Geological Survey estimated 7.4 billion barrels of undiscovered, technically recoverable oil in its study.[16]

Bakken production peaked at 1.22 million barrels per day in December 2014. Since production has varied. The U.S. Energy Information Administration (EIA) predicts Bakken production to drop by 23,000 barrels in November 2015.[17]

OilPrice reported in November 2015 that PBF Energy and Monroe Energy will likely to decrease their purchases of oil from North Dakota. Philadelphia Energy Solutions has cut its North Dakota oil purchases by 80 percent. The company is favoring oil from Nigeria, Chad and Azerbaijan.[18]

Small and independent oil companies that made their start developing natural gas resources moved into the Bakken and accumulated acreage before the oil boom in the area. As such, the most sought after lands have already been leased for development. New Entrants into the Bakken must participate in joint ventures or buy out another company. This has not discouraged investment as several billion dollars were exchanged in mergers and acquisitions in the Bakken in the fourth quarter of 2010 alone.[5]

In September 2011, The New York Times reported that 30 percent of the natural gas (methane) produced in North Dakota's Bakken formation is burned off as waste: "Every day, more than 100 million cubic feet of natural gas is flared this way — enough energy to heat half a million homes for a day. The flared gas also spews at least two million tons of carbon dioxide into the atmosphere every year, as much as 384,000 cars or a medium-size coal-fired power plant would emit." The gas rises up with the more valuable oil, and with less economic incentive to capture it, drillers treat the gas as waste and burn it.[23]

Oil production in North Dakota accounts for six percent of domestic production in the state and is largely responsible for reversing two decades of declining oil production. Currently North Dakota is running a surplus economy. According to the North Dakota Petroleum Council, crude oil taxes on production and extraction averaged 10.3 percent in 2010, bringing in $749.5 million in state revenues. Additionally, the industry spent $1.49 billion in taxable sales and purchases. In 2010 natural gas brought in over $10.1 million in extraction taxes.[5]

Petroleum geologists and Forbes analyst, Art Berman, conducted a study of the profitably of the Bakken formation Shale. The leading producing companies evaluated in his study are losing $11 to $38 on each barrel of oil that they produce, the companies evaluated were Continental Resources, EOG Resources, Hess Corporation, Marathon Oil, Statoil, Whiting Petroleum Corporation and XTO Energy, a subsidiary of ExxonMobil.[27]

Retrieved from "https://www.gem.wiki/w/index.php?title=Bakken_formation&oldid=257539"
Categories:
This page was last edited on 14 July 2021, at 23:37.
Content is available under Creative Commons Attribution-NonCommercial-ShareAlike unless otherwise noted.
Privacy policy
About Global Energy Monitor
Disclaimers