Plant Bowen is a 3,498.6-megawatt (MW) coal-fired power station owned and operated by Southern Company. It is located south of Euharlee, Georgia and west of Cartersville, Georgia.

Georgia power announced on November 5, 2021 that two of the four units at Plant Bowen would tentatively close by 2028;[2][3]

In 2022, the integrated resource plan of Georgia Power, a subsidiary of Southern Company, proposed closing 3,500 MW of coal plant capacity by the end of 2028. The closures would affect 12 coal units at five coal plants. However, the company proposed operating two coal units with a combined capacity of 1,904 MW at the Bowen plant until 2035. By 2035 the units would have been operating for 60 years. The proposed plan will be subject to public hearings and is likely to be finalised in mid-2022.[4][5] 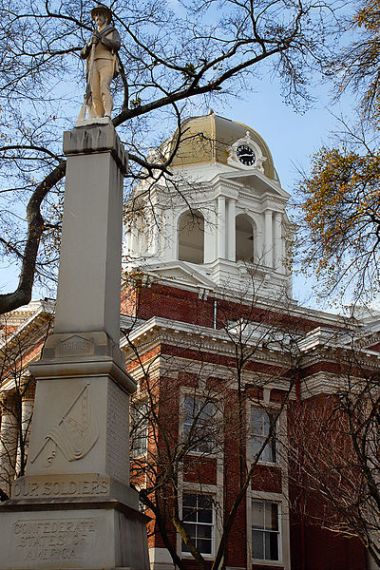 In 2010, Abt Associates issued a study commissioned by the Clean Air Task Force, a nonprofit research and advocacy organization, quantifying the deaths and other health effects attributable to fine particle pollution from coal-fired power plants.[6] Fine particle pollution consists of a complex mixture of soot, heavy metals, sulfur dioxide, and nitrogen oxides. Among these particles, the most dangerous are those less than 2.5 microns in diameter, which are so tiny that they can evade the lung's natural defenses, enter the bloodstream, and be transported to vital organs. Impacts are especially severe among the elderly, children, and those with respiratory disease. The study found that over 13,000 deaths and tens of thousands of cases of chronic bronchitis, acute bronchitis, asthma, congestive heart failure, acute myocardial infarction, dysrhythmia, ischemic heart disease, chronic lung disease, and pneumonia each year are attributable to fine particle pollution from U.S. coal plant emissions. These deaths and illnesses are major examples of coal's external costs, i.e. uncompensated harms inflicted upon the public at large. Low-income and minority populations are disproportionately impacted as well, due to the tendency of companies to avoid locating power plants upwind of affluent communities. To monetize the health impact of fine particle pollution from each coal plant, Abt assigned a value of $7,300,000 to each 2010 mortality, based on a range of government and private studies. Valuations of illnesses ranged from $52 for an asthma episode to $440,000 for a case of chronic bronchitis.[7]

In January 2009, Sue Sturgis of the Institute of Southern Studies compiled a list of the 100 most polluting coal plants in the United States in terms of coal combustion waste (CCW) stored in surface impoundments like the one involved in the TVA Kingston Fossil Plant coal ash spill.[8] The data came from the EPA's Toxics Release Inventory (TRI) for 2006, the most recent year available.[9]

According to a 2009 report by Environment America, "America's Biggest Polluters," Plant Bowen is the third dirtiest plant in the nation, releasing 23.2 million tons of carbon dioxide in 2007. Ranking is based upon Environmental Protection Agency data.[10]

In January 2012, the Environmental Protection Agency unveiled a new website that identifies most of the nation's biggest emitters of carbon dioxide, methane and other greenhouse gases. Two Southern Company coal plants near Atlanta are identified as the biggest contributors to U.S. global greenhouse gases - the Scherer Steam Generating Station in Juliette and Plant Bowen west of Cartersville, respectively - with a third Southern plant in Alabama identified as the third-biggest emitter, the Miller Steam Plant in Quinton.[11]

Retrieved from "https://www.gem.wiki/w/index.php?title=Plant_Bowen&oldid=284135"
Categories:
This page was last edited on 2 February 2022, at 20:34.
Content is available under Creative Commons Attribution-NonCommercial-ShareAlike unless otherwise noted.
Privacy policy
About Global Energy Monitor
Disclaimers