The photo below provides a closer view of the plant. 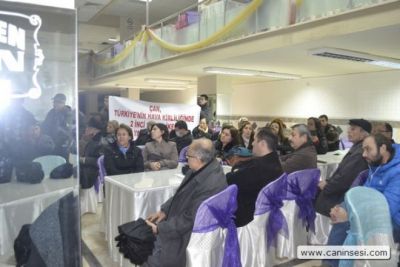 An environmental permitting hearing for the Çan-2 plant in Çan on Dec. 18, 2013. A banner protesting pollution from the proposed plant is visible in the background.[1]

The single-unit 140-MW Çan-2 coal-fired power plant is a project of Çan Kömür ve İnşaat A.Ş., a subsidiary of ODAŞ Group. The plant would be built adjacent to the existing 320-MW Çan-1 power station and the Çan lignite coal mine.[2][3][4]

The environmental permitting process for Çan-2 began in December 2013. Most attendees of a public permitting meeting on December 17 voiced opposition to the proposed plant, arguing that the project's proponents were disregarding public health. Residents of Yaya village have also asked that the village be relocated at public costs, citing the destructive effects of the existing plant (as well as the proposed one) on local agriculture.[5][1][6]

According to a May 10, 2018, report, the plant had achieved its first firing and was expected to enter commercial operations in June.[11] The plant started commercial electricity production as of 1 August 2018.[12]

In January 2015, a financing agreement for the project was closed. Yapi Kredi and Halkbank agreed to provide US$136.77 million in loans.[13]

In September 2020, a lawyer for the Çan Environment Association, Ümran Aydın, noted that the plant was causing water shortages by depleting underground supplies and drawing water from Kocabaş Stream.[14]

In September 2018, an explosion and fire in the plant's coal tank injured six workers and caused the plant to be shut down for a week.[15][16]

Retrieved from "https://www.gem.wiki/w/index.php?title=Çan-2_power_station&oldid=239583"
Categories:
This page was last edited on 30 April 2021, at 11:08.
Content is available under Creative Commons Attribution-NonCommercial-ShareAlike unless otherwise noted.
Privacy policy
About Global Energy Monitor
Disclaimers