The map below shows the proposed location (top) of the project site, in Phước Vĩnh Đông commune, Cần Giuộc district, Long An province. An alternate location in Cần Đước is shown to the south.

In 2007, ITA-Power Company, a subsidiary of the Tan Tao Group, announced that it was planning to build a 600-MW coal power plant in the Cần Đước district of Long An province, scheduled for completion in 2013. In August, 2007, the Vietnam Infrastructure Limited investment fund announced that it would be responsible for 40% of the $700-800 million required to build the plant, and in October ITA-Power stated that it would be investing $270 million of its own funds in the project.[2][3]

In July 2009, a 218-hectare site for the proposed plant, in Long Hựu Tây commune, was approved by Vietnam Deputy Prime Minister Hoang Trung Hai.[4] For years afterwards, there were no further reports on the project's progress.

In April 2015, the project was revived, now as a two-unit, 1,200-MW coal-fired plant, after the provincial government threw its support behind a new proposal by Daewoo Engineering & Construction, following a visit by Daewoo E&C representatives to the province. Provincial officials stressed that the plant must include environmental controls, however.[5]

In July 2016, following a meeting between Daewoo and provincial officials, both parties said they would be moving forward with the proposal. A different location was chosen for the plant, in Phuoc Vinh Dong Commune, Can Giuoc District. The new site is significantly closer to Ho Chi Minh City — now only about 20 km from the center of the city.[6] The proposal would cost $2.7 billion, with completion scheduled for 2020.[7][8]

In March 2017, in consultations with the Ministry of Industry & Trade, Long An provincial officials again recommended the Phước Vĩnh Đông site — but Ho Chi Minh City officials pushed back against the site, fearing that it would expose the city to pollution.[9]

In May 2017, the Long An provincial government proposed switching the plant from coal to liquefied natural gas (LNG).[10]

After initially refusing to allow Long An Province to block the plants, Vietnam's powerful Ministry of Energy and other agencies conceded in October 2018 that they “respect” the decision to oppose the plants by provincial authorities. The decision follows the national government agreeing in late 2016 to scrap the proposed 1200 MW Than Bạc Lieu power station after the province stated its opposition to the coal plants and its preference for an LNG fired project. The Long An provincial government is in discussions with companies potentially interested in building a US$5 billion plant run on liquified natural gas at the same site.[1]

In 2020, VinaCapital Group Ltd. and other investors were put in charge of the gas project. In March 2021, it was announced that the province of Long An had licensed the 3,000 MW liquefied natural gas power plant to be built by South Korea's GS Energy and fund management company VinaCapital. With an overall cost of US$3 billion, it will comprise two combined-cycle power plants, Long An 1 and 2, with a capacity of 1,500 MW each. Long An 1 is anticipated to go on stream in December 2025, and Long An 2 a year later.[11] In 2021, the two unit, 3,000 MW Long An liquefied natural gas power plant was licensed by the province of Long An.[11]

However, draft PDP8 from February 2021 pushed the first phase's start year to 2029-2030 and notes the proposal hasn't "yet had enough investment". There is no discussion of the second phase so its status is now shelved.[12] 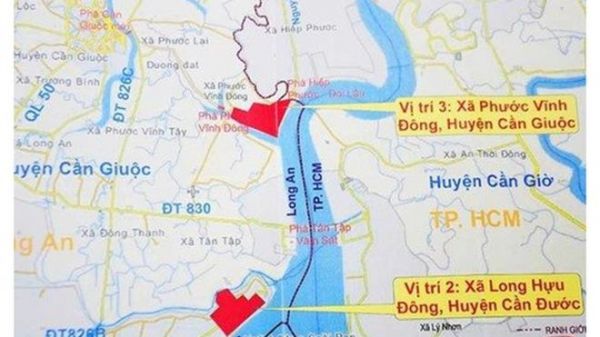 In response to concerns about the proposed location of the project in Cần Giuộc district, the People's Committee of Ho Chi Minh City has supported a new location in Cần Đước, as shown in the map.[13]

Prof. Nguyen Dinh Tuan, a professor at the Ho Chi Minh City University of Natural Resources and Environment, argued against the plant's construction in March 2017, arguing that its location — about 20 km from the center of Ho Chi Minh City — would mean that the plant would cause respiratory disease for people living in the city. The Ministry of Industry & Trade was apparently open to the idea of considering alternate locations.[14] Local officials, as well as officials in Ho Chi Minh City, have also expressed concerns.[15][16][17]

Retrieved from "https://www.gem.wiki/w/index.php?title=Long_An_power_station&oldid=260967"
Categories:
This page was last edited on 23 August 2021, at 23:07.
Content is available under Creative Commons Attribution-NonCommercial-ShareAlike unless otherwise noted.
Privacy policy
About Global Energy Monitor
Disclaimers