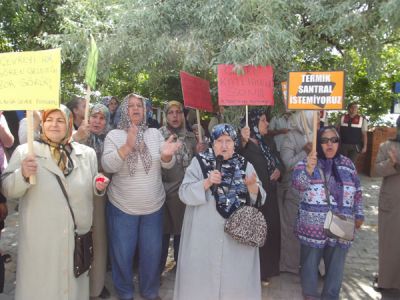 Cenal Elektrik (a joint venture between Cengiz Holding and Alarko Holding) built a two-unit, 1,320-MW coal-fired power plant along the coast in Çanakkale province.[2][3] The project received its generating license in March 2013; initial site preparation work had already begun at that point.[4]

In July 2013, responding to a lawsuit filed by local groups opposed to the project, a local administrative court voided the approval of the project's EIA, arguing that the EIA's assessment of environmental impacts had been insufficient. The ruling halted construction work on the project. Opponents, who had engaged in several protests against the project, had made several complaints, including that Cenal Elektrik had been illegally beginning work on the project prior to approval.[1][5]

The company responded by dividing the project's EIA approval process into four parts, allowing two to move forward while two others were held up. Several local organizations have filed suit against the Cenal for this move; court battles and protests over the project continue.[6][7][8][9]

In November 2014, a Turkish administrative court of Çanakkale once more rejected the four environmental impact assessments as being inappropriate and failed to address the cumulative impacts on the proposed plant. Hurryiet Daily News reported that the court "ruled that the method was contrary to the legislation imposing environmental obligations on companies." [10]

While the decision was a setback for the company, in September a new assessment report submitted by Cenal had been approved by the Environment Ministry.[10]

In December 2014, Cenal secured a US$765 million loan with a 12-year maturity for the plant, with Denizbank, Halkbank, Finansbank and Ziraat Bank contributing equally to the loan package. Cenal signed a EUR180 million EPC agreement with Alstom regarding the engineering and equipment supply for the power plant in September. An initial US$200 million loan for the US$1.2 billion project had previously been secured in 2013. The project is under construction and expected to enter operation in 2019.[12]

In November 2018, the Çanakkale Administrative Court ruled that the EIA allowing the plant to operate was invalid because it had failed to properly include meteorological data. The court also ordered the plant to stop operating but the plant was still operating as of mid-December 2018.[13] In January 2019, a new EIA was submitted by the plant's owners.[14]

NO2 and SO2 emissions (Turkish)

Retrieved from "https://www.gem.wiki/w/index.php?title=Cenal_power_station&oldid=230175"
Categories:
This page was last edited on 29 April 2021, at 20:37.
Content is available under Creative Commons Attribution-NonCommercial-ShareAlike unless otherwise noted.
Privacy policy
About Global Energy Monitor
Disclaimers