Enbridge Line 5 is a major oil pipeline in the Enbridge Pipeline System, which conveys petroleum from western Canada to eastern Canada via the Great Lakes states. Line 5 is particularly notable for passing under the environmentally sensitive Straits of Mackinac, which connect Lake Michigan to Lake Huron. The 645-mile, 30-inch diameter pipeline is capable of carrying up to 540,000 barrels of oil per day.[1] It carries synthetic crude, natural gas liquids, sweet crude, and light sour crude.[1]

The pipeline originates in Superior, Wisconsin, travels through the Upper and Lower Peninsulas in Michigan, and terminates in Sarnia, Ontario.[2] 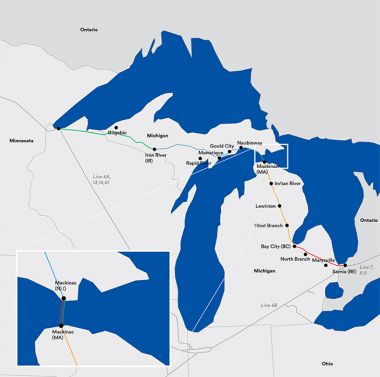 A detailed map of the pipeline's route

The pipeline runs between two major nodes of the Enbridge Pipeline System at Superior, Wisconsin, and Sarnia, Ontario. The Enbridge terminal at Superior conveys western Canadian crude oil from various incoming pipelines (including lines 1–4) to Line 5 and Line 6, which go around the northern and southern shores of Lake Michigan, respectively.

From Superior, Line 5 travels east to the Upper Peninsula of Michigan, then runs southeast to Rapid River, near Escanaba. At Rapid River, natural gas liquids (NGL) are side stream delivered for stripping, and the stripped NGLs are reinjected.[5]

From Rapid River, the pipeline runs near the northern shore of Lake Michigan until it reaches the Straits of Mackinac. There the pipeline divides into two separate 20-inch lines, which reunite when they reach the southern side of the straits.[5] The lines are buried until they reach a depth of convert 65 feet.[6] The lines descend to a depth of approximately 270 feet under the straits.

Once on land again in the Lower Peninsula, Line 5 runs near Interstate 75 to Bay City, Michigan.[7] At the Lewiston pumping station, US sweet crude may be injected.[5] From Lewiston, Line 5 loops around Saginaw Bay, then runs southeast to the St. Clair River.

Just before the St. Clair River, Line 5 reaches the Marysville pumping station. Volumes destined for Michigan and Ohio refineries such as BP-Husky Refinery and Marathon Detroit Refinery are offloaded there,[5] and transferred to a Sunoco pipeline that runs from Marysville to Toledo.[8]

The line then proceeds east across the St. Clair River to Ontario, where it rejoins Enbridge Line 6 and terminates at Sarnia.[9] Any volumes not destined for Sarnia-area refineries are there pumped into tanks for transfer to Enbridge Line 7.[5]

Construction on Line 5 was completed in 1953 by the Bechtel Corporation[10] for the Lakehead Pipeline Company.[1][4] The pipelines from western Canada to Superior had been completed in 1950; prior to the construction of Line 5, the crude oil was conveyed from Superior to southern Ontario by oil tankers.[11]

The 2013 expansion, coupled with the anticipated expansion of the Alberta Clipper pipeline, led to concerns from the National Wildlife Federation and other groups over the possible shipment of diluted bitumen from the Alberta tar sands through Line 5.[14] However, Enbridge has denied any plans to pump such materials. A 2011 toll agreement describes the materials as "condensate, light synthetic, sweet, light sour and NGL,"[5] as does a 2013 summary of the Mainline System.[5] Due to national security concerns, however, the Pipeline and Hazardous Materials Safety Administration does not divulge the materials actually carried on major US pipelines, including Line 5.[14]

Public concerns have particularly focused on the risk of a spill under the Straits of Mackinac, and the difficulty of controlling any spill that might occur.[12] According to Enbridge, the pipes under the straits have never leaked, are monitored 24 hours a day, and are regularly inspected by underwater autonomous vehicles.[1] However, there have been numerous spills elsewhere in Michigan from Enbridge pipelines, including a major Line 5 spill at Crystal Falls, Michigan in 1999, as well as the 2010 Kalamazoo River oil spill on Line 6.[14] Line 5 has spilled at least 30 times[15] and at least 1.1 million gallons along its length since 1968. Enbridge’s pipelines, which run about 1,000 feet apart at depths ranging from 100 - 270 feet, have laid on the bottom of the Straits for more than six decades. Enbridge installed several support structures under the pipelines in 2006 and again in 2010, following the company’s oil spill into the Kalamazoo River - the nation’s largest-ever land-based oil spill. The pipelines in the Straits of Mackinac cross one of the most ecologically sensitive areas in the world. The Great Lakes are home to 20 percent of the fresh surface water on the planet. University of Michigan scientists modeled the currents in the Straits of Mackinac and called it "the worst possible place for an oil spill in the Great Lakes." Despite these risks, Enbridge submitted a plan to build a tunnel for Line 5 under the Straits of Mackinac. This would keep oil flowing and Great Lakes at risk for a spill for several years, and would most certainly open the door for Enbridge to upgrade the entire pipeline to carry toxic tar sands oil - the dirtiest fossil fuel with the biggest contribution to climate change.[16]

By the end of 2015, eight Michigan counties or municipalities were calling for the retirement of Line 5 including Cheboygan, Cheboygan County, Emmet County, Genesee County, Mackinaw City, Mentor Township, Munising Township, and Wayne County.[17]

In August 2017, Michigan Governor Rick Snyder said he was "greatly concerned" about revelations by Enbridge confirming at least two areas of the pipeline under the Straits of Mackinac had lost their protective coating used to prevent corrosion down to bare metal.[19] The revelation came after years of denials by Enbridge that there were any portions of the pipeline that had lost protective coating down to bare metal.[20] The Michigan Agency for Energy, Michigan Department of Environmental Quality (DEQ), Michigan Department of Natural Resources (DNR), and the Michigan State Police echoed the concern in a press release calling for the immediate inspection of areas around every anchor on Line 5, a report to the DNR and DEQ of any findings from the inspections, a copy of the video of the recent work performed on the pipeline, and repair within 30 days of any damage to the pipeline’s coating.[21]

Another area of opposition has focused on 12 miles of Line 5 that cross through the Chequamegon-Nicolet National Forest.[22] As of September 2017, Enbridge was working with the US National Forest Service to renew a special use permit for the section, which expired in 2013.[22] Enbridge characterized the permit expiration as an "oversight" stemming from staff turnover in a 2014 letter to Forest Service.[22]

Governor Gretchen Whitmer, who replaced Governor Rick Snyder in a 2018 election, ran on a platform that supported shutting down the Enbridge Line 5. Michigan Attorney General Dana Nessel, a fellow Democrat who also campaigned on shutting down Line 5, said legislation to allow for construction of the US$350 million to US$500 million tunnel, approved during the lame-duck session during the last days of the administration of Republican Gov. Rick Snyder, violates the state constitution. Critics say that the line mostly moves Canadian oil to Canadian markets, and there are other ways to deliver propane to Michigan's Upper Peninsula, and the Great Lakes would continue to face unacceptable risk of a catastrophic spill during the roughly 10 years it's expected to take to construct the tunnel. As of April 2019, it is unclear who will make the next move, the Whitmer administration shutting down the pipelines, or Enbridge appealing the administration's decision in the courts.[23]

In June 2020, a Michigan Circuit Court Judge ordered Enbridge to temporarily halt operations of Line 5 over continuing concerns about a potential spill in the Great Lakes. The judgment stemmed from an incident in mid-June when a screw anchor support for a segment of the pipeline in the Mackinac Straits had shifted from its original position, resulting in Michigan officials filing court motions asking to shut down the line until the state had fully reviewed the information.[24]

In September 2021 research was released "to identify impacts of construction and continued operation of Line 5 on the ability of Tribesto exercise treaty guaranteed rights in a defined study area within the Chequamegon-Nicolet National Forest (CNNF)" as well as provide information to inform the United States Forest Service’s "decision regarding whether, or under what conditions, to reauthorize the special use permit that allows the continued operation of Line 5 on property currently administered by CNNF."[25]

In November 2020, Michigan Governor Gretchen Whitmer took legal action to shut down Line 5, with her office notifying Enbridge that it was revoking an easement granted in 1953 to extend a roughly 4-mile section of the pipeline through the Straits of Mackinac. In a statement, Governor Whitmer's office informed that Michigan state had found that Enbridge had repeatedly violated the 1953 easement and that the continued operation of the dual pipelines violates the state’s solemn duty to protect the Great Lakes under the public trust doctrine. The formal notice, taken after a 15 month review of what the governor's office described as Enbridge's "historic failures and current non-compliance," requires the company to cease operations of the dual pipelines in the Straits by May 2021, thereby allowing for an orderly transition that protects Michigan’s energy needs until that time. The public statement also noted that the action to revoke and terminate the 1953 easement does not prevent Enbridge from continuing to seek the necessary legal approvals to construct a previously floated tunnel alternative.[26]

Following permitting approval for the pipeline section from Michigan's Department of Environment, Great Lakes and Energy in January 2021,[27] the US Army Corps of Engineers announced in June 2021 that it would conduct an extensive review – an environmental impact statement – of Enbridge's plan. This will include a consideration of reasonable alternatives and could take years to complete. Enbridge had planned to start construction work in 2021. On the day of the Corps' announcement, Enbridge's shares closed 0.4% down at C$49.08 on the Toronto Stock Exchange.[28]

According to EarthJustice as of Early 2022, Enbridge has been operating the the dual pipelines in the Straits illegally since May 2021.[15]

The Bad River Tribal Council has passed two resolutions opposing Line 5 traversing the Bad River Watershed.[4] The Bad River Band of the Lake Superior Tribe of Chippewa Indians of the Bad River Reservation sued Enbridge, alleging "Enbridge no longer has the legal right to operate Line 5 across the full reach of the Reservation corridor."[29]

In January 2022, activists staged an event calling on the Wisconsin Department of Natural Resources (DNR) and the Army Corps of Engineers to deny permits for the pipeline. The action was organized by 350 Madison and the Sierra Club Wisconsin.[30]

In April 2022, Indigenous women leaders from Great Lakes tribes called for the U.S. Army Corps of Engineers (USACE) "to fully review and reject a Line 5 project in northern Wisconsin."[32] In a letter to USACE activists stated that both current Line 5 and the proposed Line 5 expansion threaten to irreversibly damage our drinking water, our ecosystems, and manoomin [wild rice]. Both the existing and proposed pipelines violate our tribal usufructuary rights. They endanger the Great Lakes’ waters and fisheries important to many people. They exacerbate the climate crisis that affects the whole planet."[10] The letter was endorsed more than 200 groups including the Sierra Club, Michigan Environmental Justice Coalition, West Michigan Environmental Action Council, Indigenous Environmental Network, Honor the Earth and Center for Biological Diversity.[32]

In February 2020, Enbridge Pipelines proposed a project replacing its Line 5 crude oil pipeline beneath the St. Clair.[33] The project will add a half kilometer of new pipeline and was first approved in 2012.[34] 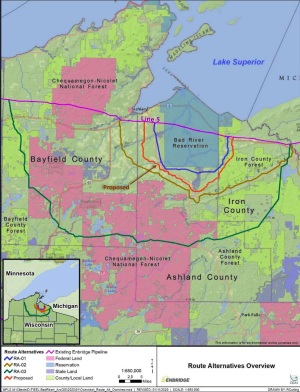 Enbridge is proposing a reroute of Line 5 around the Bad River Reservation. Three proposed routes are shown. RA-02 appears to be the most likely.

According to the Wisconsin Department of Natural Resources, the relocation project consists of 41 miles of new 30-inch diameter pipe within Ashland, Bayfield, and Iron County, WI.[36] A draft Environmental Impact statement says that approximately 20 miles of the existing 30-inch-diameter Line 5 Pipeline in the Bad River Reservation in Ashland and Iron Counties would be abandoned.[37]

Wikipedia also has an article on Enbridge Line 5. This article may use content from the Wikipedia article under the terms of the GFDL.

Retrieved from "https://www.gem.wiki/w/index.php?title=Enbridge_Line_5_Oil_Pipeline&oldid=351116"
Categories:
This page was last edited on 18 July 2022, at 17:20.
Content is available under Creative Commons Attribution-NonCommercial-ShareAlike unless otherwise noted.
Privacy policy
About Global Energy Monitor
Disclaimers