National Coal Mine 12 is a newly planned National Coal Corporation mining operation in Knoxville, Tennessee, announced in July 2010. National Coal said when the mine is fully operational it is anticipated to add about 40,000 tons per month, or 480,000 tons per year, to the Company’s production. Sales will be targeted to the specialty coal market. After receiving the final permit, construction of Mine 12 has begun. Production at Mine 12 will be ramped-up over a period of 18 months, with first production planned in the fourth quarter of 2010.[4]

National Coal’s operations in Tennessee include the coal mineral and mining rights to approximately 79,000 acres of land, along with mining complexes that currently include one active underground mine and one active surface mine. In addition, National Coal continues to own and operate one preparation plant and one unit train loading facility served by the Norfolk Southern Railroad.[4]

Production and revenues up for 2008

President and CEO Daniel A. Roling also said that the company is seeing higher prices per ton in 2009 compared to the previous year and is in contracts to sell 3.45 million tons of coal.[5]

Expected production for NCOC in 2008 was between 2.5 and 3 million tons of coal.

Derailed train dumps 1100 tons of coal next to New River

On January 9, 2009, a train operated by National Coal Corporation overturned and spilled around 1100 tons of coal next to the New River in Scott County, Tennessee. The spill was discovered three days later by Steve Bakaletz, a wildlife biologist with the National Park Service. According to Bakaletz, crews had been attempting to clean up the spill but had not yet completed by the time the it was discovered. The New River supports two endangered species of fish.[6] 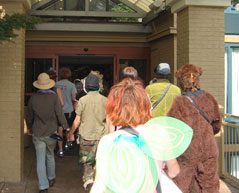 On August 15, 2005, Earth First! and Mountain Justice Summer activists blockaded a road leading to National Coal's mountaintop removal coal mine in Campbell County, Tennessee. Activists stopped a car on the road, removed its tires, locked themselves to the vehicle, and erected a tripod with a person perched on top of it. National Coal workers arrived and threatened the protestors; one tried to ram the tripod with his car. Eleven people were arrested; the police treated the arrested activists very roughly, endangering their safety.[8][9]

An employee with National Coal Corporation forcefully removed a non-violent anti-mountaintop removal protester from the National Coal headquarters in West Knoxville. The protester was part of a group participating in “Love and Hug National Coal Month,” part of a series of protests organized by United Mountain Defense every Thursday in August at National Coal’s office. The protesters had organized a “Going Away Party” for NCC after the coal company defaulted on $60 million dollars of loans in Alabama in July 2009. To mark this event the protestors brought balloons and cupcakes reading “Bye National Coal’ and “Take a Hike”. Wearing party hats and dancing to festive music, the volunteers entered the National Coal Headquarters in order to deliver the cupcakes. Within 30 seconds an employee of National Coal Corporation wrapped his hand around the video camera, contorted the cameraman’s wrist and escorted the peaceful group back outside, at which point he stated that NCC did not want to call the police. The non-violent protesters complied with the National Coal employee’s request and moved to the public right of way in front of the office building. They educated passing motorists, gave away the unwanted cupcakes, danced, and had a fun time in the hot sun.[10][11]

Retrieved from "https://www.gem.wiki/w/index.php?title=National_Coal_Corporation&oldid=235097"
Categories:
This page was last edited on 30 April 2021, at 11:02.
Content is available under Creative Commons Attribution-NonCommercial-ShareAlike unless otherwise noted.
Privacy policy
About Global Energy Monitor
Disclaimers