The undated satellite photo below shows the plant, which is near Sugözü village, Yumurtalık district, Adana province. Ayas Enerji's Misis Ayas power station will be located immediately next to it.

This two-unit, $1.5 billion, 1,210-MW coal-fired power plant received environmental approval in May 2000, and was commissioned in November 2003.[1] It is the first privately owned and operated coal-fired power station in the country, and is 51% owned by Germany's Steag Gmbh, and 49% by OYAK, the Turkish armed forces pension fund.[2] OYAK is also the majority owner of the adjacent AYAS Enerji Power Plant project.

The power station receives coal from one of the world's largest floating coal transshipment terminals, the Isken in the Gulf of Iskenderun, Turkey. Around 3 million tons of coal are discharged by the system each year, mainly from vessels arriving from Colombia and South Africa. A shore-side conveyor belt system takes the coal to the 800,000-ton-capacity stockpile adjacent to the power station.[3] 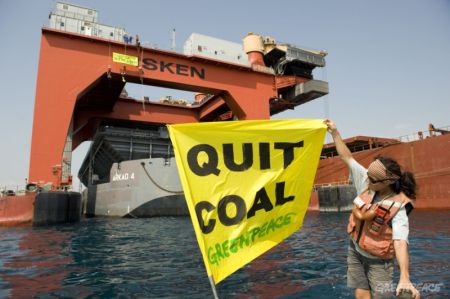 Activists board one of the world's largest coal platforms at Botas Oil Terminal, stopping barges from importing coal to the İsken Sugözü coal fired power plant.

In September 2008, four climbers from Greenpeace's Rainbow Warrior were arrested after they occupied a giant coal loading platform to prevent a delivery of coal to this coal plant, which emits 10 million tonnes of carbon dioxide annually.[4]

In 2018 it was claimed that the plant was causing pollution and an increase in cancer rates locally.[5]

Retrieved from "https://www.gem.wiki/w/index.php?title=İsken_Sugözü_power_station&oldid=239605"
Categories:
This page was last edited on 30 April 2021, at 11:08.
Content is available under Creative Commons Attribution-NonCommercial-ShareAlike unless otherwise noted.
Privacy policy
About Global Energy Monitor
Disclaimers