Ugljevik Thermal Power Plant is a 300-megawatt coal-fired power plant in Bosnia and Herzegovina. The plant is owned and operated by RiTE Ugljevik, a subsidiary of Elektroprivreda Republike Srpske.

The undated satellite photo below shows the plant located near Ugljevik, in the Republic of Srpska.

The 300 MW plant began operating in 1985 in the city of Ugljevik, situated in the foothills of the Mount Majevica. The city is named after coal - "ugalj" - which has been mined since 1899. Construction of the first unit was underway in 1976. A second unit was also underway, but construction was halted during the Bosnian war. The plant is considered a sister unit to Gacko Thermal Power Plant.[1]

In September 2012, the company's environmental impact statement was submitted to the government. The government released a statement announcing that a public hearing on the project would be held on October 10.[3]

In 2014, Comsar Energy Republika Srpska said the company had begun the construction of the Ugljevik 3 power station, with a projected operation date of 2016.[4] According to local observers, construction had not begun as of October 2014.

The station would be fueled by brown coal from new surface mines in Delići, Peljave-Tobut, and Baljak in the Ugljevik basin, which would be built simultaneously alongside the plant by Comsar Energy, with plans for a total annual coal production of 3.5 million tonnes.[4]

In January 2015, China National Electric Engineering Company signed an MOU with the government of Republic of Srpska, BiH to develop the Ugljevik 3 power station, and the Ugljevik-Istok 2 and Delici coal mines.[5]

As of October 2016, the plant was still seeking financing and facing lawsuits challenging its permit as incongruous with EU regulations of new coal plants.[6]

In July 2017, the Supreme Court of the Republika Srpska Entity cancelled the environmental permit based on a court challenge by the Center for Environment from Banja Luka. However, the Ministry of Spatial Planning, Construction and Ecology responded by issuing another permit without repeating the environmental impact assessment process. This second permit was also challenged in court by the Center for Environment, and annulled in June 2019.[7]

In May 2019, Comsar Energy announced the company was leaving Bosnia & Herzegovina, and terminating all existing projects and investments there, including Ugljevik. Elektroprivreda Republike Srpske was reportedly interested in buying Comsar's shares in the coal plant project.[8]

However, in early 2021, the Government of Republika Srpska extended Comsar Energy’s concession for construction and operation of Ugljevik 3 from 30 to 44 years. According to local campaigners, this occurred despite the fact that the concession agreement was violated on several occasions because permits were not obtained or preparation works started.[9]

Even though firms from China and Poland signed a construction agreement just two months earlier, Comsar Energy was reportedly negotiating a takeover according to September 2021 news.[12]

In September 2021, China announced it would stop developing new coal power projects outside of its own borders.[13] In January 2022, it was reported that Chinese bank loans will not be available for the Ugljevik project.[14]

In March 2022, the Center for the Environment from Banja Luka sued the Ministry of the Republika Srpska over the approval of a third environmental impact study. The study was finalized in December 2021. While Comsar was still actively seeking new funders, the Center called into question the viability of new funding and where the funding for the study itself had come from. It was expected that forward progress on the project would be halted until court proceedings occurred. The Center's announcement stated that the expansion "has no future".[15]

In July 2022, Minister of Energy and Mining of the Republic of Srpska Petar Đokić said he doubted that the Ugljevik 3 coal plant project would be implemented. He made the remark immediately after the Center for Environment from Banja Luka, the entity’s capital city, said it sued his ministry for granting the environmental permit in violation of the rules and an agreement with the Energy Community Secretariat. A decision on the lawsuit may be expected by March 2023.[16][17]

On April 24, 2014, the Center for Environment in Bosnia, Herzegowina, and Serbia held a demonstration in front of the coal-fired power plant Ugljevik. The demonstration was in response to the publication, “Expensive, dirty, poisonous – energy from coal and its dark secrets.” Protestors held a sign that said in Bosnian, “And what’s the price of health?” as well as an inflatable pair of damaged lungs as an art piece.[18] 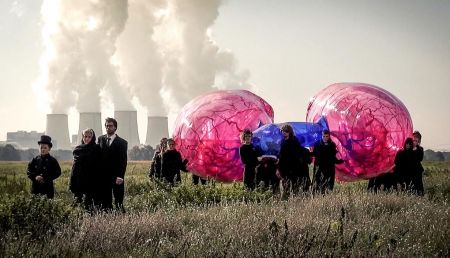 In 2018, Bosnia and Herzegovina authorities acknowledged that their environmental assessments were illegal and have decided to not use the environmental permit from 2014. In 2014, the Center for Environment from Banja Luka sent a complaint about the environmental permit for building the Ugljevik plant to the Energy Community Secretariat, which was eventually sent to the Ministerial Council in Skopje. The complaint “outlined how the EU’s Directive on Environmental Impact Assessment – binding for Bosnia and Herzegovina under the Energy Community Treaty – has been violated” because the plans for the Ugljevik plant did not include the plant’s impact on the environment, specifically pertaining to CO2 emissions and metal pollution. Furthermore, “the data on emissions of SO2, NOx and dust from the plant are demonstrably false.”[19]

On February 19, 2019, the Health and Environment Alliance (HEAL), Sandbag, Climate Action Network Europe, CEE Bankwatch Network, and Europe Beyond Coal released a Chronic Coal Pollution report. The report urged the EU to “take a tougher stance on air pollution from coal power plants in the Western Balkans,” including the Ugljevik power plant in Bosnia-Herzegovina. Their main issue with the power plants were the premature deaths, bronchitis cases in children, and health costs of up to 11,535 million euros ($13 million).[20]

In September 2021, representatives of the local community and environmentalist organizations expressed concern during a public debate that the draft environmental impact assessment study for the controversial Ugljevik 3 thermal power project was incomplete. They said the document did not reveal the real potential damage and claimed it made no sense to build the facility while coal phaseout dates are being determined in the region and Europe.[12]

Retrieved from "https://www.gem.wiki/w/index.php?title=Ugljevik_Thermal_Power_Plant&oldid=352681"
Categories:
This page was last edited on 28 July 2022, at 12:10.
Content is available under Creative Commons Attribution-NonCommercial-ShareAlike unless otherwise noted.
Privacy policy
About Global Energy Monitor
Disclaimers