The undated satellite photo below shows the proposed location for the plant, near Bayat village, Kireçlik district, Zonguldak province. 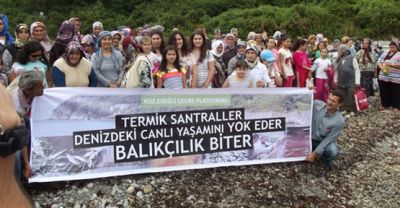 The project was met with vigorous local protests, led by KDZ.Ereğli Çevre Platformu and Greenpeace, with a great deal of support from local political officials — particularly a boat action in August 2013, which attracted a great deal of media attention.[1]

In 2017 it was reported that the area proposed for the Kireçlik power station had been designated a tourism area, making it unsuitable for coal plants.[2]

As of May 2018, the EIA was no longer listed online,[3] and the project appears to have been cancelled.

Retrieved from "https://www.gem.wiki/w/index.php?title=Kireçlik_power_station&oldid=233703"
Categories:
This page was last edited on 30 April 2021, at 10:48.
Content is available under Creative Commons Attribution-NonCommercial-ShareAlike unless otherwise noted.
Privacy policy
About Global Energy Monitor
Disclaimers