The map below shows the location of Çırpılar, the approximate location where the plant would be built in Çanakkale province.

The Çırpılar power plant is a proposed coal-fired power plant to be located in the Çanakkale province, near Çırpılar, Turkey. It would be fuelled by a new open-pit lignite (brown coal) mine, which would cover require an area of 845 hectares. The plant would consume 3.5 million tonnes of lignite per year, and produce 200MW of thermal energy. Storage for 465,000 tonnes of coal would be developed, covering an area of around 90 football pitches (36.5 hectares) on the edge of the pristine Mount Ida.[1]

This history of the project was posted by the NGO BankTrack in September 2017:[1]

The Çırpılar coal power plant project is one of 15 new coal projects planned in the Çanakkale region of Turkey. It has been in pre-permit development stage since May 2015 when the project sponsor, Taşzemin İnşaat (a subsidiary of Taşyapı Holding), submitted its Environmental Impact Assessment (EIA).

The area where the project is planned is qualified as agricultural land, meaning a decision by the Ministry of Food, Agriculture and Livestock on change of use is necessary. This decision can only be issued once the EIA is approved by the Ministry of Environment and Urbanization, which has not yet occurred as of September 2017.

However, the project has been discussed twice, most recently in December 2016, by the Soil Protection Council of Çanakkale and considered inappropriate, because ponds established by public funds for irrigation of arable land have been designated as the source of cooling water for the coal plant.

However the Soil Protection Council of changed its mind by July 2017, releasing a new decision stating that the project was not inappropriate, although no changes had been made to the project plans. The project sponsor has added this decision to the current EIA report as an annex, although the final decision on the suitability of the area for non-agricultural land use still lies in the Ministry of Food, Agriculture and Livestock. The impression given in the current EIA report that the Soil Protection Council's approval justifies their project plans is misleading.

After the announcement in January 2017 of the project’s evaluation and assessment meeting, a coalition of local communities, environmental associations, national NGOs and Turkish citizens mobilised to object to the project. In a very short time 65 village leaders in the region, among 75 in total, submitted letters of objection and more than 50,000 individuals signed a petition, initiated by TEMA foundation, to cancel the project. Moreover, a mass social media campaign started and became so popular that the issue found its way to national media outlets despite the current busy political agenda in Turkey. The meeting was delayed and rescheduled for 13 September 2017." 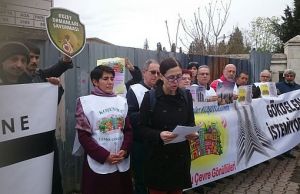 In July 2018 a lawsuit to have the EIA invalidated on the grounds that the project's impact on human health and local agriculture had not been fully considered was filed by the TEMA Foundation, the Society for the Protection of Natural and Cultural Heritage of Kazdaı, and the Chamber of Agricultural Engineers.[5] In April 2019 the organizations North Forest Defense (KOS), Kosuyolu Environment Volunteers and Yenice Solidarity staged a protest march to the plant's construction site in Çırpılar.[6] In October 2019 the plant's positive EIA was criticized by Kazdağları Deputy Mayor Rebiye Ünüvar and other local officials, who argued that the plant's negative impact on the region's agriculture and ecology had not been accurately assessed.[7]

In April 2020, the conclusion to the lawsuit brought by Turkish groups in 2018 saw the project's EIA being cancelled. The court verdict ruled that the proposed power plant would negatively affect forests and the environment.[8] In February 2021 the 6th Chamber of the Council of State rejected an appeal of the EIA's cancellation.[9] As of June 2021 an appeal of the cancellation of the plant's EIA had failed, according to CAN Europe.[10] The project is cancelled.

The plant would be fueled by a new open-pit coal mine in the region.[11]

Retrieved from "https://www.gem.wiki/w/index.php?title=Çırpılar_power_station&oldid=253921"
Categories:
This page was last edited on 2 July 2021, at 15:10.
Content is available under Creative Commons Attribution-NonCommercial-ShareAlike unless otherwise noted.
Privacy policy
About Global Energy Monitor
Disclaimers