ANZ, one of Australia's largest banks, is a major financier of coal fired power stations and coal mines.

ANZ has committed to the following relevant voluntary international principles:

In addition to these standards ANZ has also developed individual sustainability policies. With regard to power generation, ANZ has developed a Climate Change policy [4] and a Greenhouse and Energy policy[5]

Both policies commit ANZ to assess the emission intensity and environmental performance of customers followed by an agreement between the bank and the client about how the environmental risks of a client’s activities should be mitigated.[4][6]

These policies do not, however, lead to an exclusion of investments in companies that generate coal-fired power or develop new coal-fired power plants. ANZ also developed a specific Mining and Minerals policy which states that the bank will support activities demonstrating best practice environmental protection and community engagement measures when it comes to mining activities.[7]

Table 3 Investments of ANZ in the Australian coal sector

Table 4 Investments of ANZ in the Australian renewables sector 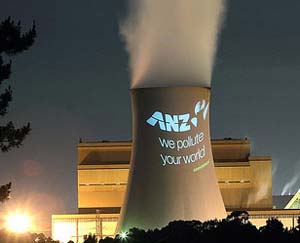 At least 33 protests have been held in NSW, Queensland, South Australia and Victoria, with demonstrators giving out flyers and holding placards as well as hanging banners outside ANZ bank headquarters, and projecting the same message on a power station: ANZ We Pollute Your World. On 19 October 2010 Greenpeace displayed a projection on the side of Yallourn W power station, in Moe, Victoria, as part of the campaign targeting the financing of Australia's coal industry.[8] Greenpeace referred to the power station as "the third most polluting power station in Australia and one of ten across the country financed by ANZ over the last five years."[9] 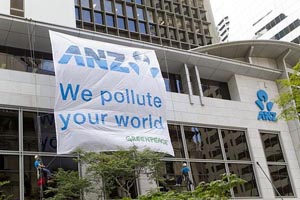 On 21 October 2010 Greenpeace hung a banner on the side of the ANZ state headquarters in Brisbane, Queensland to highlight the the fact that ANZ has provided $1.6 billion in finance to the coal industry over the past five years while claiming to be a leader in sustainability. "ANZ have been winning awards for sustainability amd has a commitment for going carbon-neutral, but at the same time, they're the bigget financiers of polluting coal in Australia. We think that is hypocritical. They should put their money where their mouth is," said Greenpeace spokesman John Hepburn said. Four Greenpeace activists associated with the protest were arrested.[10]

Other groups campaigning on this issue

Ten local climate action groups as well as the Camp for Climate Action and the Australian Youth Climate Coalition helped with the ANZ campaign.

Retrieved from "https://www.gem.wiki/w/index.php?title=ANZ_and_coal&oldid=256653"
Categories:
This page was last edited on 14 July 2021, at 23:22.
Content is available under Creative Commons Attribution-NonCommercial-ShareAlike unless otherwise noted.
Privacy policy
About Global Energy Monitor
Disclaimers