In 2020, Ghanaian activist Chibeze Ezekiel was awarded the Goldman environmental prize for his efforts in halting the proposal.

The map below shows Central region, the approximate location for the proposed power station.

In July 2013, it was reported that the Ghana Coal power station would cost US$700 million and be built within 2.5 years. Once operating, the plant will burn 2 million tons of coal per year, which will be imported from South Africa. The construction of the plant will also include a new coal port to receive the coal. The project is proposed by Shenzhen Energy Group (SEG), the parent company of Sonon Asogli Power.[1]

The feasibility studies were completed in 2014, and the project was then estimated at US$1.5 billion. The Ghana ministry agreed to coordinate with Shenzhen Energy for the formation of a joint venture to invest and build the coal plant, with construction estimated at 36 months or longer from the commencement stage.[2]

In September 2014, it was reported that Ghana electric utility Volta River Authority (VRA) had signed a memorandum of understanding with Shenzhen Energy Group to develop a 1,200 MW coal-fired power plant in Ghana. Volta River Authority said it will work with locally-based Sunon Asogli Power Ghana to bring the power station online by 2018.[3]

In September 2015, VRA and Shenzhen said the power station would be 2,000 MW, and may be established at Otuam in the Central region. The target date was 2019. Feasibility studies are ongoing.[4]

In December 2015, VRA and Shenzhen released a pre-feasibility environmental and social impact assessment for phase I: 2x350MW supercritical coal plant, including an affiliated coal handling terminal. Phase II would be a 4X350MW or 2X600MW supercritical coal plant. Coal would be imported from South Africa. The project, which is planned for construction in 2017 and commercial operation in 2020, is estimated to cost US$1.5 billion.[5]

In April 2016, the Environmental Protection Agency (EPA), in collaboration with the Volta River Authority (VRA), held a public forum to assess the environmental impact of the plant, reported to be 2,100 MW (Phase I of 700 MW and Phase II of 1,400 MW) and located at Ekumfi Aboano, in the Ekumfi District of the Central Region. Apart from the power plant, another component of the project is a harbour to import the coal from South Africa and Colombia.[6]

As of October 2016, comments by Minister of the Environment Mahama Ayariga indicated that the project had been shelved due to climate change concerns. Speaking at a press conference alongside US EPA Administrator Gina McCarthy, Ayariga asserted that the Aboano plant would not be built. As initially posted in an article in Ghana Business News, Ayariga is quoted as follows: “Ghana is not setting up a coal plant. Somebody has put in an application, which has not been approved. For the rest of my term as the Minister of Environment, I will not be signing a permit for anyone to put up a coal plant when Ghana has just ratified the Climate Change Agreement”.[7]

In May 2017, Shenzhen Energy Group in collaboration with Volta River Authority (VRA) submitted an ESIA for a 2×350MW supercritical coal-fired plant (including an affiliated coal handling terminal) along the coastline of Aboano. According to the ESIA, the first phase of the project is planned to commence in December 2017 and be completed in 2020-2021. The principal source of coal for the project would be imported from South Africa and shipped from the Richards Bay Coal Terminal. The project is estimated to cost US$1.5 billion.[9]

In June 2017, the Ghanaian president announced that new power projects in the country would only be renewable energy-based. In 2020, Ghanaian activist Chibeze Ezekiel was awarded the Goldman environmental prize for his efforts in halting the project as part of 350 Ghana Reducing Our Carbon (350 GROC).[10]

In March 2016, the China-Africa Development Fund announced it will provide US$1.5 billion to finance the two 350 MW units.[11] 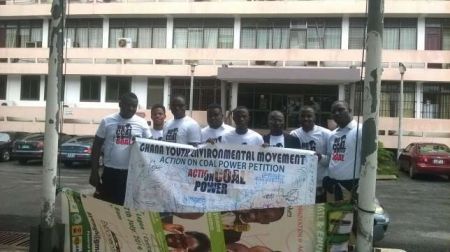 In February 2016, the Ghana Youth Environmental Movement called for a separate Environmental and Social Impact Assessment (ESIA) to be done on the project, saying it came to the “shocking conclusion that a greater section of the public and the media were not adequately aware and informed about the project” and "We therefore call for a number of coordinated public hearings and press conferences to further discuss it." The group also noted the "Scoping Report indicated that children in Ekumfi Aboano are 55.9% of the entire population of 1,900 people. Children are very vulnerable especially to air-borne pollutants such as PM10 and smog."[12]

In response to heavy flooding in Accra and other locations in June 2016, 350 Africa and G-ROC (Ghana Reducing Our Carbon) expressed opposition to a coal-fired power plant in the country and vowed to block it.[13]

Retrieved from "https://www.gem.wiki/w/index.php?title=Aboano_power_station&oldid=279929"
Categories:
This page was last edited on 26 December 2021, at 16:08.
Content is available under Creative Commons Attribution-NonCommercial-ShareAlike unless otherwise noted.
Privacy policy
About Global Energy Monitor
Disclaimers