The Amadeus to Moomba Gas Pipeline is a proposed natural gas pipeline in Australia.[1]

The pipeline runs from the Amadeus Basin in the south of the Northern Territory to Moomba, South Australia.[2][3]

In August 2020, Central Petroleum signed a memorandum of understanding with Australian Gas Infrastructure Group and Macquarie Mereenie to move towards a final investment decision on the pipeline in the second half of 2021. Construction would begin in 2022 and the pipeline would be commissioned in 2024. The pipeline would be less than half the distance of the current 2,250-km network, through which gas is piped from the Amadeus Basin to Moomba.[6] 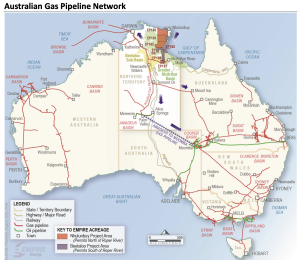 Arid Lands Environment Centre (ALEC) opposes the project, noting that the pipeline could transport as much as 90% fracked gas, according to a 2017 feasibility study commissioned by the Australian government.[8] The group also notes the pipeline would cross remote ecologically and culturally sensitive regions.[8][9]

Retrieved from "https://www.gem.wiki/w/index.php?title=Amadeus_to_Moomba_Gas_Pipeline&oldid=358391"
Categories:
This page was last edited on 16 September 2022, at 22:06.
Content is available under Creative Commons Attribution-NonCommercial-ShareAlike unless otherwise noted.
Privacy policy
About Global Energy Monitor
Disclaimers