The plant is several miles east of the Nantahala National Forest, and about five miles south of Ashville, North Carolina.

In 2015 Duke Energy announced that it would retire the coal plant in "four to five years" (2019 or 2020) and replace it with a larger gas plant (650 MW) plus a solar facility of undisclosed size located on the Asheville Plant's coal combustion waste site. Members of the Ashville Beyond Coal Campaign, including Waterkeeper Alliance, Sierra Club, MountainTrue, and Southern Environmental Law Center, applauded the retirement of the plant but criticized its replacement with gas-fired generation: "Folks want a bright future that supports clean energy, not a giant gas plant polluting Asheville for another 30 years."[1][2]

According to the EIA 860M (November 2018), the power station is planned for retirement in 2019.[3] However, in January 2020 it was reported the coal plant would close that month, once the gas plant was online.[4]

In March 2010, pilot J. Henry Fair flew over the Asheville Plant and made the following observations:[6] 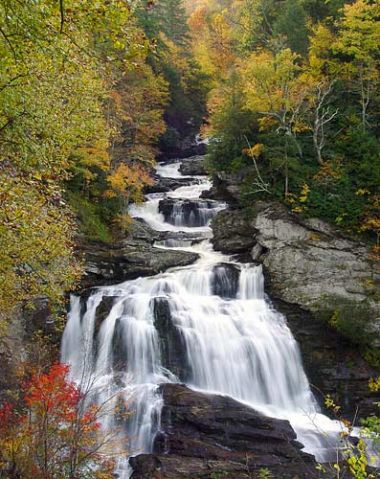 Cullasaja Falls in the Nantahala National Forest, west of the Asheville Plant.

In 2010, Abt Associates issued a study commissioned by the Clean Air Task Force, a nonprofit research and advocacy organization, quantifying the deaths and other health effects attributable to fine particle pollution from coal-fired power plants.[12] Fine particle pollution consists of a complex mixture of soot, heavy metals, sulfur dioxide, and nitrogen oxides. Among these particles, the most dangerous are those less than 2.5 microns in diameter, which are so tiny that they can evade the lung's natural defenses, enter the bloodstream, and be transported to vital organs. Impacts are especially severe among the elderly, children, and those with respiratory disease. The study found that over 13,000 deaths and tens of thousands of cases of chronic bronchitis, acute bronchitis, asthma, congestive heart failure, acute myocardial infarction, dysrhythmia, ischemic heart disease, chronic lung disease, and pneumonia each year are attributable to fine particle pollution from U.S. coal plant emissions. These deaths and illnesses are major examples of coal's external costs, i.e. uncompensated harms inflicted upon the public at large. Low-income and minority populations are disproportionately impacted as well, due to the tendency of companies to avoid locating power plants upwind of affluent communities. To monetize the health impact of fine particle pollution from each coal plant, Abt assigned a value of $7,300,000 to each 2010 mortality, based on a range of government and private studies. Valuations of illnesses ranged from $52 for an asthma episode to $440,000 for a case of chronic bronchitis.[13]

Table 1: Death and disease attributable to fine particle pollution from the Ashville Plant

In January 2009, Sue Sturgis of the Institute of Southern Studies compiled a list of the 100 most polluting coal plants in the United States in terms of coal combustion waste (CCW) stored in surface impoundments like the one involved in the TVA Kingston Fossil Plant coal ash spill.[14] The data came from the EPA's Toxics Release Inventory (TRI) for 2006, the most recent year available.[15]

Asheville Plant ranked number 69 on the list, with 411,793 pounds of coal combustion waste released to surface impoundments in 2006.[14]

Two of Asheville Plant's coal ash surface impoundments are on EPA's official June 2009 list of Coal Combustion Residue (CCR) Surface Impoundments with High Hazard Potential Ratings. The rating applies to sites at which a dam failure would most likely cause loss of human life, but does not assess of the likelihood of such an event.[16]

The study "EPA’s Blind Spot: Hexavalent Chromium in Coal Ash," released by EarthJustice and the Sierra Club in early February 2011, reported that the level of hexavalent chromium, a highly potent cancer-causing chemical, at a coal ash site associated with the Asheville Plant was 83 parts per billion.[17] That level is 4,150 times as high as California's drinking water goal, and 66% above North Carolina's groundwater standard. In all, the study cited 29 sites in 17 states where hexavalent chromium contamination was found. The information was gathered from existing EPA data on coal ash as well as from studies by EarthJustice, the Environmental Integrity Project, and the Sierra Club.[18][19][20][21] It included locations in Alabama, Arkansas, Delaware, Florida, Illinois, Indiana, Minnesota, Massachusetts, North Carolina, North Dakota, Nevada, Ohio, Oklahoma, Pennsylvania, Tennessee, Virgina and Wisconsin. In North Carolina, the Dan River Steam Station in Eden, the Asheville Plant in Arden and the Cape Fear Steam Plant in Montcure all were reported as having high levels of hexavalent chromium.[17]

A press release about the report read:

Hexavalent chromium first made headlines after Erin Brockovich sued Pacific Gas & Electric because of poisoned drinking water from hexavalent chromium. Now new information indicates that the chemical has readily leaked from coal ash sites across the U.S. This is likely the tip of the iceberg because most coal ash dump sites are not adequately monitored.[22]

According to the report, the electric power industry is the leading source of chromium and chromium compounds released into the environment, representing 24 percent of releases by all industries in 2009.[17]

On January 8, 2013, conservation groups Cape Fear River Watch, Sierra Club, Waterkeeper Alliance, and Western North Carolina Alliance filed a lawsuit against the state Environmental Management Commission, Duke Energy, and Progress Energy seeking the cleanup or shut-down of 14 coal ash pits. The suit challenges a ruling in December 2012 by the Environmental Management Commission, which voted 9-2 that Duke and Progress ash pits were subject to less stringent regulations and were therefore not out of compliance with groundwater contamination standards. The groups argue that monitoring by Progress Energy shows persistent groundwater contamination, including arsenic levels above state standards, at the company’s Asheville Plant and Sutton Steam Plant. Sampling at 12 other coal-fired plants, the litigants contend, also show contamination.[23]

On May 27, 2008, North Carolina State Representative Pricey Harrison introduced House Bill H2709 into the North Carolina General Assembly. The bill seeks to outlaw the use of coal extracted from mountaintop removal mines from being burned in North Carolina coal fired power plants.[24]

On July 31, 2009, Governor Perdue signed Senate Bill 1004, which increases the safety oversight of coal ash ponds in North Carolina. The legislation requires that the dams enclosing coal ash ponds be inspected every two years by the N.C. Department of Environment and Natural Resources. The bill was sponsored by State Sen. David Hoyle (D-Guilford) and Rep. Pricey Harrison (D-Guilford).[26]

Taking on the Coal Industry in North Carolina

Retrieved from "https://www.gem.wiki/w/index.php?title=Asheville_Plant&oldid=368475"
Categories:
This page was last edited on 14 December 2022, at 23:44.
Content is available under Creative Commons Attribution-NonCommercial-ShareAlike unless otherwise noted.
Privacy policy
About Global Energy Monitor
Disclaimers