The map below shows the exact location of the rail head terminal in the Bachatsky coal mine, near Bachatsky, in Belovsky District, Kemerovo Oblast, Russia.

Coal mined at the Bachatsky coal mine is shipped to more than 16 countries and to 22 regions of Russia. Foreign consumers include countries in Europe, Central Asia, Southeast Asia and South America.[2]

Between 2012–2013 the Bachatsky coal mine caused three large earthquakes. On the 18 June 2013 the mine caused the world's strongest ever earthquake induced by hard mineral mining had a local magnitude 6.1. Seismic activation of the territory at the Bachatsky Open Pit Mine affected Kuzbass towns.[3] The earthquake damaged 500 Homes in Kemerovo Region. An official in Bachatsky village said the locals are afraid to enter their homes after the earthquake for fear of collapsing walls and so they were staying outside.[4]

Earthquake of magnitude 2.2 was registered in June 2022 with the epicentre at the mine.[5]

It appears that a continuous expansion of the mined area is ongoing: in 2022, an assessment of Environmental Impact was released for the purposes of public consultation.[6][7]

Local people report problems associated with the mine. "Yevgeny moved to the village of Starobachaty a decade ago, there was a potato field in front of his house. Since then, the neighbouring Bachatsky coal mine has increased in its activity and today the field has been replaced by a huge spoil tip. Yevgeny says he is no longer bothered by the occasional detonations which shake his house. Still, he will never get used to the coal dust which spews from the mine. 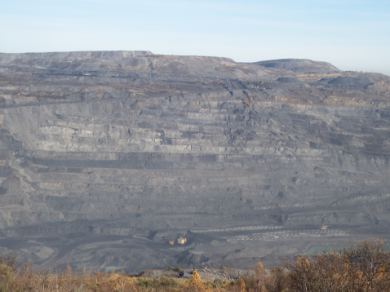 Bachatsky coal mine (2017) courtesy of the Coal Action Network (UK)

‘When the wind blows this way, it is impossible even to go out. The dust gets in your mouth and in between your teeth,’ he says with a broken voice. ‘When the authorities come to inspect the situation, the mine suddenly stops its work. There is no more dust and no more noise. As soon as they are gone, it starts all over again.’ As Yevgeny recalls, the only environmental activists in the village were old pensioners who have passed away. As for himself, he does not have enough time to deal with the environmental problems. ‘When you are retired, then you have free time. But I have a family to feed.’"[8]

There are reports of the Bachatsky mine producing a corridor of polluting dust of over 15 km, affecting 10 settlements and the southern area of the town of Belovo.[9]

Retrieved from "https://www.gem.wiki/w/index.php?title=Bachatsky_coal_mine&oldid=362318"
Categories:
This page was last edited on 31 October 2022, at 23:16.
Content is available under Creative Commons Attribution-NonCommercial-ShareAlike unless otherwise noted.
Privacy policy
About Global Energy Monitor
Disclaimers