Baltic Pipe Project is an under construction pipeline project that would transport gas from Norway to Poland via Denmark.[1]

The project consists of five components:[2]

The Baltic Pipe is a proposed 650 kilometer (maximum) pipeline being developed by Energinet and Gaz-System with a 120km-long offshore natural gas pipeline portion that will be built between Rødvig, Denmark, and Niechorze, Poland. The final investment decision is scheduled to be reached in 2018, while the project's commission date is October 2022.[17] The Baltic Pipe Project will allow transport of gas from Norway to the Danish and Polish markets, as well as to end-users in neighboring countries. At the same time, the Baltic Pipe Project will enable the supply of gas from Poland to the Danish and Swedish markets.[18]

In August of 2019, Poland's gas grid operator Gaz-System agreed to buy a set of compressor units for 550 million zlotys ($141 million) from U.S. company Solar Turbines for its planned link to Norway’s gas fields. Poland sees the Baltic Pipe as a way to diversify its gas supply, most of which is currently imported from Russia under a long-term contract with Gazprom that expires in 2022. The Baltic Pipe, as well as increased supplies of liquefied natural gas (LNG) via a Baltic Sea terminal at Świnoujście Polskie LNG Terminal, is designed to help Poland replace Russian gas deliveries.[19] The project also provides Poland with an opportunity to become a central European gas hub.[9]

Part of the project was approved as a Project of Common Interest (PCI) by the European Commission, meaning it will be eligible to receive public funding. The PCI portion of the project will be a total of 204 kilometers (200 onshore, 4 offshore), and 10 billion cubic meters/year.[20]

In May 2020, the project achieved a complete set of construction permits following Sweden's approval for the pipeline to pass through 85 kilometres of the Swedish exclusive economic zone of the Baltic Sea. However, the planned October 2022 construction completion date may be delayed as the Baltic Pipe crosses both the Nord Stream 1 and 2 pipelines in Danish waters and requires the approval of the operators of both Nord Stream pipelines to do so. Approval from the Nord Stream 1 consortium is expected because it is owned by a consortium of Gazprom and EU-based companies, but approval from the Nord Stream 2 project may be more complicated as it is wholly-Gazprom operated.[21]

In autumn 2020, construction work started to prepare the pipe landfalls in both Poland and Denmark. By the end of November it was reported that short sections of the pipeline had been laid on the east and west coasts of the Jutland peninsula.[12]

In June 2021, a temporary halt was called on pipeline construction work in Denmark following the rescinding of an environmental permit by a Danish public appeals committee due to concerns over the pipeline's impact on protected mice and bat species. Several weeks later, Energinet said that construction work would resume on parts of the project but that construction at two locations in Denmark would be suspended until 2022, pending the issuance of a new environmental permit. As a result, Energinet said that it expected the overall project completion to be delayed by three months.[22] Energinet estimated this delay costs 80 million euro.[23]

In June 2020, the Financial Times reported that the project promoters were confident of securing financing for the project, with Gaz-System in talks with about 15 banks over the financing of its investment programme, which includes its share of the Baltic Pipe costs. Overall funding from European Union grants could rise to up to €267 million.[9] In April 2019 Poland received a €214.9 million grant from the EU's Connecting Europe Facility (CEF) to help build its portion of the pipeline.[24] The project was earlier awarded three CEF grants for a feasibility study and preparatory works: €387,374 in 2015[25]; €33,149,601 in 2017[26]; €18,300,000 in 2018.[27]

The Baltic Pipeline will include the following:[15]

In July of 2019, DNV GL won a major contract to provide independent verification services for the Danish transmission system operator Energinet’s section of the Baltic Pipe project, offshore Denmark. DNV GL’s contract includes independent verification and submarine pipeline certification to the DNV GL certification regime DNVGL-SE-0475. The acceptance criteria are the Danish Continental Shelf Law, DNVGL-ST-F101 and the suite of underlying DNV GL standards and recommended practices. The work will take place during the engineering, procurement, construction, installation, hook-up and commissioning phases of pipeline development over the next three years.[29]

In August of 2019, Energinet contracted Corinth Pipeworks to supply offshore linepipe for the project. Corinth Pipeworks will manufacture 114 km (71 mi) of 32-inch and 36-inch SAWL steel pipes (43,000 tons in total) with a three-layer polyethylene anti-corrosion coating, epoxy lining for flow assurance, and concrete weight coating with sacrificial anodes and bends. Deliveries are due to start in late-2019 and continue through 2021, when the pipes will be laid through Danish waters.[30]

In April 2020, Gaz-System signed a contract with Italian construction company Saipem to lay the offshore pipeline, with work expected to start in the second half of 2020.[21] 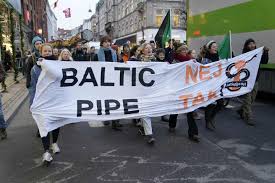 Protesters in Copenhagen march against the proposed Baltic Pipe in Jan. 2020[33] 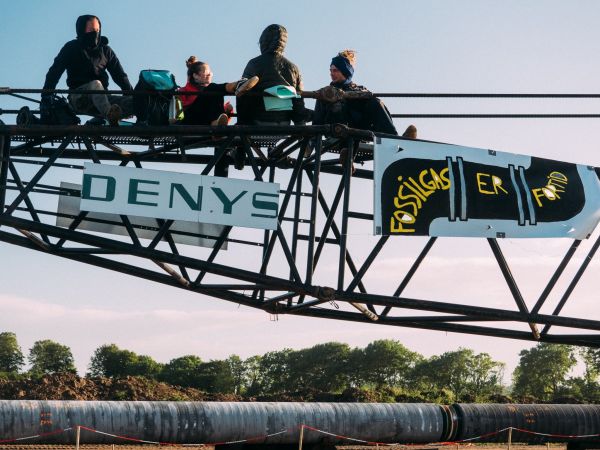 Retrieved from "https://www.gem.wiki/w/index.php?title=Baltic_Pipe_Project&oldid=261045"
Categories:
This page was last edited on 24 August 2021, at 20:13.
Content is available under Creative Commons Attribution-NonCommercial-ShareAlike unless otherwise noted.
Privacy policy
About Global Energy Monitor
Disclaimers