The map below shows the apparent site of the proposed plant, in Pinamucan Barangay, Batangas City, Batangas Province. JG Summit's petrochemical plant is located immediately to the south.

The proposal is by JG Summit Holdings Inc. for four 150-megawatt coal plants on a 20-hectare site in Barangay Pinamucan Ibaba.[1] The plant would be adjacent to JG Summit's Batangas petrochemical plant.

The project went through a permitting process in 2013-14, and received an initial permit from the Department of Energy in July 2014.[2]

In June 2016 the Bantagas City Council voted 7-4 to approve zoning clearance for the project inside the city's heavy industrial zone.[3]

As of September 2016, the project was listed as being in an "advanced stage of development," and was in financial discussions with potential lenders.[4] As of February 2017, the project still had some permits outstanding, and was still seeking funding.[2]

In December 2017 the Batangas city council used a special session to pass a resolution in favor of operating the plant, with six votes in favor, two in opposition, and two abstentions. "This is a very serious subject and the public should have been invited," said Councilor Nestor Dimacuha, who voted against the plant.[6]

As of January 2020 there had been no further progress in developing the plant and it appears to have been shelved. The project is not listed in the December 2020 Philippines Department of Energy report on initiated power plants in Luzon.[7][8] As of June 2021 the project is cancelled, according to the Philippine Movement for Climate Justice.[9] 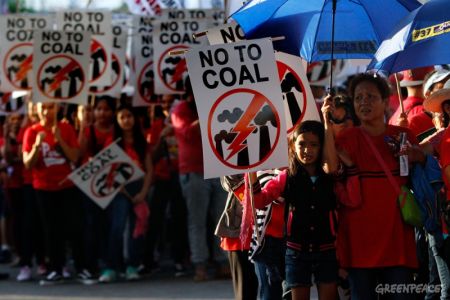 In April 2015 about 300 Catholic priests led by Lipa Archbishop Ramon Arguelles held a prayer rally before proceeding to a committee hearing called by the Batangas city council to discuss issuing a location permit for the project. In February 2015, the priests also led a “prayer walk” attended by some 3,000 people. They have been campaigning against the coal-fired power plant through their churches.[10]

On May 4, 2016, around 10,000 people marched in Batangas City to express their opposition to the project. Greenpeace described the protest:[11]

The anti-coal march highlighted a national campaign called “Piglas Batangas! Piglas Pilipinas!” symbolized by the struggle against the proposed 600-megawatt coal plant of JG Summit Holdings in Barangay (Village) Pinamucan Ibaba, Batangas City. The opposition to the plan is led by the Lipa Archdiocesan Ministry on Environment, local fisherfolk, and other concerned citizens.

“Even without the coal plant, the existing plants of JG Summit are already poisoning our air, water, and land. The proposed coal plant would only make it harder for us to breathe, much less fish,” said 27-year-old Reymond Mendoza, a fisherman from the nearby barangay of Simlong, which also hosts the Gokongwei family-owned complex. The complex has a petrochemical and naphtha cracker plant.

The local anti-coal groups were joined by other coal-affected communities from Quezon and other parts of the country, as well as people’s movements and civil society groups from Metro Manila and other provinces in Southern Luzon.

In August 2017, the Department of Environment and Natural Resources (DENR) held a public hearing on the plant in Batangas City, at which Greenpeace, the Philippine Movement for Climate Justice, Health Care Without Harm, the Archdiocesan Ministry on Environment (AMEn), and other local groups and community members voiced their opposition to the project. Yeb Saño, Executive Director of Greenpeace Southeast Asia, said: “Batangas province does not need any new coal-fired power plants. The whole country does not need any new coal plant. The writing is on the wall – coal plants bring along with them a host of problems that include adverse health burdens for the local communities and dangerous pollution of the air, land, and water - in the entire value chain of coal.”[12]

Retrieved from "https://www.gem.wiki/w/index.php?title=Batangas_power_station&oldid=254138"
Categories:
This page was last edited on 6 July 2021, at 15:02.
Content is available under Creative Commons Attribution-NonCommercial-ShareAlike unless otherwise noted.
Privacy policy
About Global Energy Monitor
Disclaimers