The associated power plant project has been cancelled, putting expansion plans in jeopardy. As of 2022, those plans appear shelved.

The mine is located just to the east of the Revubue River and Zambezi River junction.

The project was originally proposed by Riversdale Mining. In its 2006 annual report the company stated that in July 2006 it had purchased four separate tenements in the Lower Zambezi Coal Basin of Mozambique. "The tenements cover an area of approximately 203,000 hectares and represent a significant strategic holding in the Moatize Coal Province. This province is considered to be one of the largest known undeveloped coking and thermal coal regions in the world. Riversdale anticipates completing acquisition of the licences in Mozambique during September 2006. Riversdale will undertake an intensive exploration program on targeted tenements in Mozambique with a view to fast-tracking development of sustainable long-term mining operations, with an initial focus on metallurgical coal resources," the company reported.

The company's primary focus was on the Benga licence area in the Moatize area which was adjoined by licences held by the Brazilian company, Companhia Vale do Rio Doce (CVRD). Riversdale reported that "a major feasibility study is being undertaken by CVRD to establish a major coal mine with associated rail and port facilities on its concessions containing 2.4 billion tonnes of coking and steaming coal. Based on geological evidence, the coal bearing series being mined at a nearby coal mine and intersected by CVRD on their licences extends across the Benga Licence. Coal outcrops on the Benga Licences, and data from drilling on each side of the Benga Licence, creates a strong likelihood of hard coking coal resources across these licences." The company stated that its initial intention was to develop plans for a 2 million tonne per annum export project. It also stated that "it is envisaged that further exploration will help identify thermal coal resources with a view to establishing the viability of local power stations."[3]

The U.S. Geological Survey reported in its 2007 survey of the Mozambique mining industry that "in December 2007, Riversdale Mining Ltd. of Australia announced the signing of a joint-venture agreement with Tata Steel Ltd. of India to develop a mine in the Moatize coalfield. Tata purchased a 35% share in the Benga and the Tete licenses that were held by Riverside. Resources at Benga were estimated to be about 1.23 billion metric tons."[4]

The Australian commodities forecasting agency, ABARE noted in March 2010 that "Riversdale is planning to develop the Benga project (3.3 million tonnes). However, because of the extent of development required (mining and infrastructure), export capacity is not assumed to be completely utilised" by 2015.[5]

In a December 2008 presentation to investors, Riversdale Mining outlined the licence area of the Benga coal project.[6] 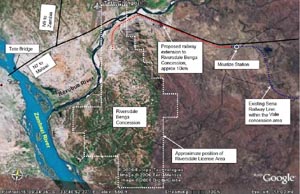 (A larger more detailed version of the map can be accessed here).

In April 2011, Riversdale Mining's share was taken over by Rio Tinto. At the time Rio Tinto stated that the "the Riversdale acquisition provides Rio Tinto with one of the world’s most prospective tier one coking coal developments. The growth prospects for the Riversdale assets are considerable. We remain optimistic about the outlook for the global coking coal market. This is a great opportunity for our business to deliver on the development of a large-scale coking coal resource". Rio Tinto stated that the Benga project had been granted a mining concession "with initial coal for export scheduled before the end of the year."[8]

The mine received government approval in January 2010[9] and reached commercial production in June 2012. In its 2012 annual report Rio Tinto stated that "commercial production in 2012 was 460 thousand tonnes. Near-term sales volumes will reflect the availability of rail and port capacity."[10] The company reported that marketable reserves for the mine were 199 million tonnes in 2012".[11]

In July 2014 ICVL bought Rio Tinto Coal Mozambique's interest in the Benga mine along with its other exploration titles in Tete province of Mozambique for US$50 million.[13]

In mid-2014 the mine was producing 5 million tonnes per annum.[14]The mine is operating and is currently producing prime hard coking coal and thermal coal.[14]

Coal from the mine is transported to Beira Port via the 660 kilometre-long Sena railway. 1.6 million tonnes of coal per annum can be transported for export from the port.[15]

Operations were suspended in December 2015 due to low coal prices, but restarted in March 2018.[16]

As part of the mine development plan, Riversdale plan to relocate 500 families to a new village 50 kilometres from the mine site. In its 2010 annual report the company stated that as part of phase 1 of the mine "approximately 59 households need to be relocated ... Preparations for the relocation of the affected families are progressing well with construction of the host town at Mwaladzi on schedule. This follows official Government approval of the Riversdale Resettlement Action Plan (’RAP’) and the subsequent construction license approval by the Provincial Resettlement Committee. The Mwaladzi village will eventually accommodate in excess of 500 families relocated from the Benga concession area."[17]

In March 2011, Australia's Riversdale Mining said it will invest $46 million in locomotives to carry coal from its Benga coal mine in Mozambique to Beira port. Riversdale will buy 11 locomotives and 200 railcars for the rail line. According to Bloomberg, the locomotives and railcars will probably be delivered in April 2011 before the mines starts exporting coal in September 2011. The Benga mine is expected to produce 5.3 million metric tons (mt) of metallurgic coal a year by the second half of 2011, some of it for the proposed Benga Power Plant. Output may rise to 20 million mt of met coal a year by 2013, of which 10 million mt will be exported. The project, jointly owned by Tata Power's Tata Steel, has an estimated coal reserve of 502 million mt.[18]

In mid-January 2013 Rio Tinto announced that it had written off US$3 billion relating to Rio Tinto Coal Mozambique (RTCM) investments. In a media release Rio Tinto stated that "the development of infrastructure to support the coal assets is more challenging than Rio Tinto originally anticipated. Rio Tinto sought to transport coal by barge along the Zambezi River, but this option did not receive formal approvals.These infrastructure constraints, combined with a downward revision to estimates of recoverable coking coal volumes on the RTCM tenements, have led to a reassessment of the overall scale and ramp up schedule of RTCM, and consequently to the impairment announced today. Rio Tinto continues to engage with the Government of Mozambique on all transport infrastructure options."[19]

At the same time the company announced that it had sacked Tom Albanese over this and other write downs. (Doug Ritchie, "who led the acquisition and integration of the Mozambique coal assets in his previous role as Energy chief executive", was also sacked at the same time.) Rio Tinto chairman Jan du Plessis said in the media release that "the Rio Tinto Board fully acknowledges that a write-down of this scale in relation to the relatively recent Mozambique acquisition is unacceptable."[19]

Associated with the project, Riversdale have proposed the construction of the Benga Power Plant, a 2000 megawatt coal-fired power station. (The company have proposed that stage one of the project would be 500MW with a later expansion contingent on the upgrading of the transmission line).[20]

Retrieved from "https://www.gem.wiki/w/index.php?title=Benga_coal_mine&oldid=368658"
Categories:
This page was last edited on 18 December 2022, at 05:45.
Content is available under Creative Commons Attribution-NonCommercial-ShareAlike unless otherwise noted.
Privacy policy
About Global Energy Monitor
Disclaimers