The image below shows the location of the plant in Bengkulu City, South Sumatra Province.

In the second quarter of 2015 China's state-owned Power Construction Corporation of China (PowerChina) won the project in an international competitive bidding and secured the power purchase agreement (PPA) with PLN in November 2015. The US$360 million plant is under a contract of 25-year Build-Own-Operate-Transfer (BOOT) model. It is owned by PowerTenaga Listrik Bengkulu (TLB), a joint venture between PowerChina (70%) and PT Intraco Penta (30%). In October 2016, the project began construction.[2]

Financial close was reached in June 2017, with the Industrial & Commercial Bank of China (ICBC) and the Export-Import Bank of China providing financial services for the project. Construction of the plant is reportedly in "full swing", and it is planned for commissioning in 2020.[3] The 2018-2027 long-range plan gives a completion date of 2019 for Unit 1 and 2020 for Unit 2.[4] In December 2019 it was reported that the plant would be commissioned in Q1 2020.[5]

According to PowerChina both units had been commissioned as of December 31, 2019.[6] In March 2020 the project's sponsor declared force majeure and stated that plant operations would be impacted as a result of the COVID-19 pandemic.[7]

In July 2017, a financing agreement was closed for the 200-MW project. US$270 million in loans will be provided by the Industrial and Commercial Bank of China and China Exim Bank. The financial advisor for the project is DBS Bank. US$90 million in equity is being provided by PowerChina and Intraco Penta Group.[8]

In May 2018, a number of farmers in Bengkulu city expressed opposition to the plant because its construction was damming a stream and causing their land to flood.[9] In August 2018, dozens of residents of Bengkulu City held a demonstration in opposition to the plant.[10] In February 2020, fishermen and civil society organizations floated a 20m x 12m banner in the bay near the site of the plant as President Joko Widodo visited Bengkulu.[11] 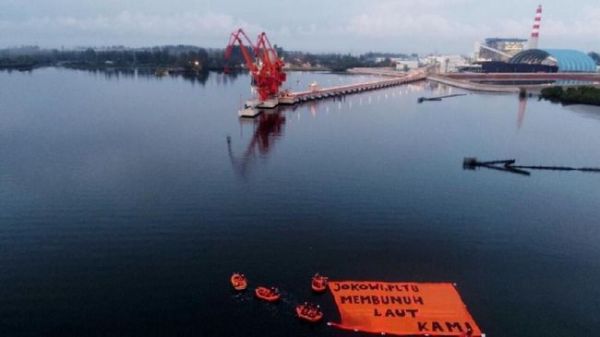 In August 2021 an analysis of the plant's Environmental Impact Assessment (EIA) found that the plan to build the plant violated two regional planning regulations.[12]

Retrieved from "https://www.gem.wiki/w/index.php?title=Bengkulu_power_station&oldid=349396"
Categories:
This page was last edited on 7 July 2022, at 13:45.
Content is available under Creative Commons Attribution-NonCommercial-ShareAlike unless otherwise noted.
Privacy policy
About Global Energy Monitor
Disclaimers