Big Air Shougang (首钢滑雪大跳台) is located in the Shougang Industrial Park. It is part of the urban rejuvenation project that transformed the hundred-year-old Shougang steel plant into the Beijing 2022 headquarters. It is the only snow event venue in downtown Beijing, awaiting free ski and snowboard big air athletes to jump against the backdrop of blast furnace coolant towers. The venue will be a permanent big air facility, the first of its kind in the world.[1]

"Rusting factories and machinery remain, but the space between has been filled by grassy lawns, glassy ponds and a good deal of greenery. One of the blast furnaces was given a face-lift and turned into a steampunk-style event space with shops, commercial offices and a museum. The yards host dance showcases in the summer, and architects plan to transform one of the massive cooling towers hovering over the big air jump into a wedding venue."[4] 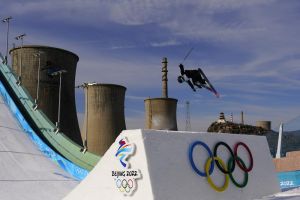 Shougang steel plant （Shougang for short) was founded in 1919, when the Beiyang government approved the establishment of Longyan Iron Mine Co., Ltd., a joint venture between the government and businessmen, and established the Shijingshan Refinery in Shijingshan, Beijing. By 1994, the annual steel output had reached 8.24 million tons, and Shougang became the "national champion" in the industry. [6]

In 2001, Beijing won the right to host the 2008 Olympic Games. China has promised to host a "green Olympics", but Beijing's air is badly polluted. After a heated debate, in 2005, the central government decided to relocate Shougang out of Beijing. According to the analysis of the environmental protection department, the relocation of Shougang can reduce 18,000 tons of inhalable particulate matter in Beijing every year. In 2002, the emission of inhalable particulate matter in the Beijing area was 80,000 tons, and the emission of Shougang was 18,000 tons, accounting for more than one-fifth.[7]

At the end of December 2010, the Shougang old factory completed the last furnace of molten iron and announced the suspension of production. After Shougang moved operations (and the physical blast furnaces) to Caofeidian, the old factory area left 8.63 square kilometers of development space. On July 31, 2015, when the International Olympic Committee announced that Beijing would be the venue for the 2022 Winter Olympics and Winter Paralympics, the old idle factory area of ​​Shougang ushered in another opportunity.[6]

On February 18, 2005, the National Development and Reform Commission approved Shougang to build an international advanced iron and steel complex in Caofeidian. On October 22, 2005, the inaugural meeting of Shougang Jingtang Iron and Steel United Co., Ltd. was held in Caofeidian, Tangshan City, marking that the relocation of Shougang and the construction of Caofeidian Iron and Steel Project have entered a substantial stage. From March 12, 2007, the construction of the Jingtang Iron and Steel Plant project of Shougang began, to May 21, 2009, the No. 1 5500m³ blast furnace was ignited and supplied with air, and then steelmaking, hot rolling and cold rolling were put into operation one after another. Achieve full line penetration. On June 26, 2010, the No. 2 blast furnace of Shougang Jingtang Company was opened. On the 27th, the No. 2 blast furnace was successfully tapped, and the first phase of the project was fully completed and put into operation.[8] The step 1 of second phase project was officially launched on August 21, 2015, and fully put into production on August 1, 2019. The company's designed annual output is 13.47 million tons of iron, 13.7 million tons of steel.[9]

Retrieved from "https://www.gem.wiki/w/index.php?title=Big_Air_Shougang_Steel_Plant&oldid=287743"
Categories:
This page was last edited on 11 February 2022, at 23:33.
Content is available under Creative Commons Attribution-NonCommercial-ShareAlike unless otherwise noted.
Privacy policy
About Global Energy Monitor
Disclaimers