Bison Gas Pipeline is a natural gas pipeline that runs from Wyoming to North Dakota.[1]

TC Energy's Bison Gas Pipeline was built by Michels Pipeline Construction and Price Gregory International, and became operational on Jan. 14, 2011.[3] TC Energy president Russ Girling explained the need for the pipeline this way: “The Rockies was one of the last major North American producing basins that we weren’t connected to."[3]

TC Energy originally bought the pipeline project in 2008 from Northern Border Pipeline Co. as a way of adding new shippers for its planned Pathfinder natural gas pipeline from the U.S. Rockies region.[4]

The pipeline exploded in a remote area near Gillette, Wyoming, on July 20, 2011, blowing out a 36-foot section of the pipeline and shaking buildings more than a half-a-mile away.[5] In October 2012, the Canadian Broadcast Company (CBC) published internal TC Energy documents that showed employees were concerned about potential safety issues related to welding and inspection. "We are in trouble on the Bison project," the pipeline's construction manager wrote in Sept. 18, 2010.[6] TC Energy previously claimed that it would be "20 or 30 years" before the pipeline needed any repairs.[7]

Ranchers and others who lived along the route of the pipeline expressed concerns about shoddy construction after soil on top of the pipeline sank in the spring of 2011, as shown in this photograph: 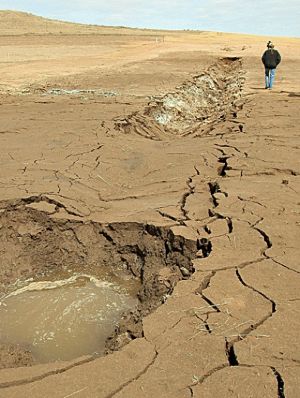 Landowners in Montana complained about trenches left after the soil on top of the Bison Pipeline sunk in the spring of 2011. (Bob Zellar/The Billings Gazette/Associated Press).[6]

The amount of gas flowing through the pipe dropped precipitously after its first year in operation, then dropped to nothing in 2015, according to a June 2016 report by BTU Analytics: "When the pipeline first opened, shippers ramped up volumes to nearly fill the pipeline, but changing natural gas pricing spreads and declines in Powder River volumes left the pipeline empty until the polar vortex of 2013. As storage volumes in the Canadian and Midwest markets have replenished, Bison flows have since returned to zero."[8] 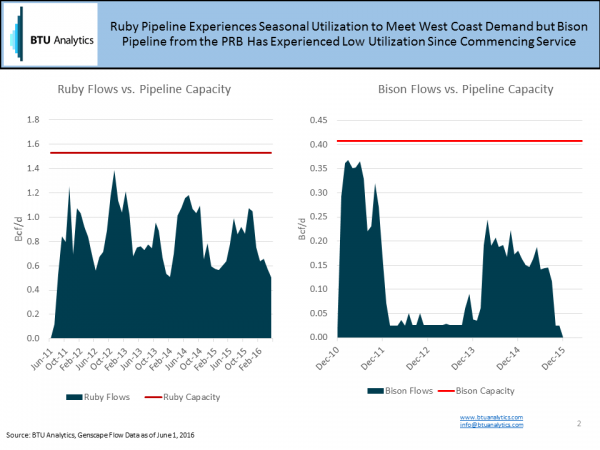 Retrieved from "https://www.gem.wiki/w/index.php?title=Bison_Gas_Pipeline&oldid=261453"
Categories:
This page was last edited on 28 August 2021, at 01:19.
Content is available under Creative Commons Attribution-NonCommercial-ShareAlike unless otherwise noted.
Privacy policy
About Global Energy Monitor
Disclaimers