The map below shows the location of the plant in Rowokudo, Ujungnegoro, Kandeman, Batang Regency, Central Java, Indonesia.

In October 2011 two Japanese companies (utility J-POWER and Itochu, a conglomerate with major coal interests) teamed up with Indonesia-based Adaro Power (a subsidiary of Adaro Energy) to build a large coal-fired power plant using advanced ultra-supercritical technology. The three companies formed PT Bhimasena Power Indonesia to operate the plant, with power being sold to PT Perusahaan Listrik Negara (PT PLN), Indonesia's state-owned utility. Originally, the plan was for the first 1,000 MW unit to begin operating in late 2016, followed by the second 1,000 MW unit in 2017. If built, it will be the largest coal plant in Indonesia.[1]

The project was initially planned for commissioning by 2016, but has faced opposition from landowners and environmental groups,[2] and delays in acquiring land and completing environmental assessments.[1] To override local opposition, the government invoked the 2012 Land Acquisition Law, which enables land procurement in the name of the public interest. In April 2015 the government said it would start the construction on the plant at the end of the month, despite protests by local people.[3] Unit 1 is now planned for commissioning in 2018, and Unit 2 in 2019.[4]

On April 30, 2015, Masayoshi Kitamura, president of J-Power, said, "We will start construction as soon as possible, at least by Oct. 6."[5] On August 28, 2015, President Joko Widodo performed a ground-breaking ceremony at the plant site.[6] Activists denounced the ceremony as a publicity stunt, pointing out that in reality landowners continued to refuse to sell about 10 percent of the 226 hectares needed by the project.[7]

In late September 2015 J-Power said it would miss the Oct. 6 deadline to provide initial funding for the plant due to long-running land disputes.[8]

In February 2016 the Supreme Court rejected a challenge by residents against lower court approval of the siting of the plant in central Java. The community is considering other legal options. The first unit is now planned for 2020.[9] In March 2016 it was reported the plant was beginning the construction phase.[10] In June 2016 JBIC approved a US$3.4 billion loan agreement for the plant.[11]

The World Bank's Indonesia Infrastructure Guarantee Fund (IIGF) awarded its first government guarantee of US$33.9 million to the project. The bank also served as the transaction advisor for the project, arranging financing and promoting the project to investors.[19]

All of the World Bank Group’s activities surrounding the Central Java Power Project add up to as much or more involvement than is typically expended for a direct project investment by the World Bank Group. However, because the World Bank Group has approached this project through back door means, i.e., financial intermediaries and off-budget grants for technical assistance, this mega coal project did not have to meet the World Bank Group’s criteria for coal lending, including full consideration of alternatives, internalizing the cost of carbon, and optimizing energy efficiency and conservation measures. Such an approach has also resulted in less international scrutiny and transparency than is typically involved in Bank-supported coal developments.[19]

In August 2014 it was reported that the Japanese Bank for International Cooperation (JBIC) was considering funding 60% (over 400 billion yen) of the plant’s construction, using public funds.[20]

Adaro Energy, Itochu and J-Power provided US$879 million in equity for the project.[22]

According to Greenpeace Indonesia, the planned site for the plant is in the Ujungnegoro-Roban coastal area, which is a marine conservation area and was declared an area for development of marine tourism under Government Regulation No. 26/2008. The plant will infringe upon a protected area, in direct contravention of Central Java provincial bylaw No 6/2010 on spatial planning. If construction of this coal plant goes ahead at least five villages in the Batang area will be demolished, and hundreds of hectares of jasmine, plantations and paddy fields will be destroyed. Arif Fiyanto of Greenpeace Indonesia said, “The planned coal plant will pollute rich coastal fishing waters and threaten the livelihoods of more than 10,000 small-scale fishermen.” Greenpeace also reported that the plant will emit 226 kg of mercury per year.[23]

Around 7,000 residents of the five villages affected by the project are strongly opposed to its construction. In addition, a range of environmental and human rights groups have protested the project.[24] About 74 farmers from four villages in Central Java’s Batang regency have refused to sell their land for the project.[25]

In December 2015, the National Human Rights Commission, an Indonesian state-sanctioned but independent group, sent letters to Prime Minister Abe and the Japanese parliament requesting that greater attention be paid to human rights issues associated with the plant. The letter stated that since 2013, a pressure campaign had been conducted against hold-out landowners “including intimidations and physical and mental threats.” According to additional comments by commissioner Dianto Bachriadi, heavy machines driven by military soldiers hired by the government and the consortium made canals surrounding the properties of local people who were refusing to sell. “It has made them isolated. People from outside can’t go in and the residents can’t bring their products out,” he said. According to Bachriadi, the commission had previously recommended that the project site be moved to a less-populated and less-conflicted area, but the recommendation was ignored.[26]

In July 2015, three villagers affected by the proposed plant traveled to Tokyo to personally deliver an official objection to the Japan Bank for International Cooperation (JBIC), the public financial institution considering funding the project. The objection filed with JBIC was signed by 23 leaders of the local community organization known as Paguyuban UKPWR. The communities also filed a complaint against Japanese companies Itochu and J-Power under the OECD Guidelines for Multinational Enterprises. The communities allege that JBIC has violated its social and environmental guidelines in proceeding with the project.[27] 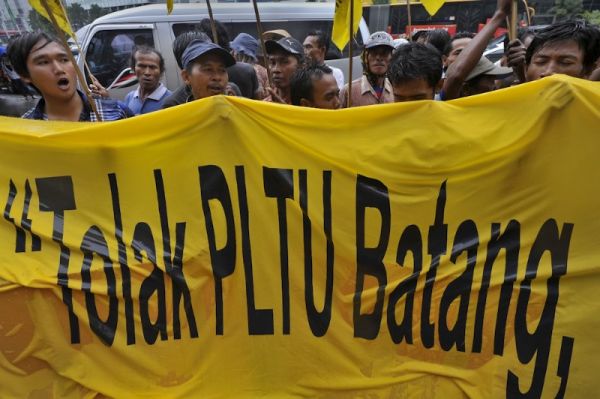 On July 22, 2013, about 150 people protested against the project in front of the Japanese Embassy in Jakarta. The protesters were members of Paguyuban Rakyat Batang Berjuang Untuk Konservasi, supported by Yayasan Lembaga Bantuan Hukum Indonesia (YLBHI), or Indonesia Legal Aid Foundation (YLBHI). According to protesters, the project would heavily impact the livelihoods of thousands of fishermen due to its effects on coral reefs and other environmentally sensitive areas. In addition, the 200-500 acres used by the project would destroy irrigated rice fields and tens of thousands of trees. Among the protesters was M. Ali Tafrihan of Roban village, who reported being jailed for six months as a result of his opposition to the project.[28]

According to Lembaga Bantuan Hukum (LBH) Semarang, a legal aid organization that has been working with residents at the project site, thugs as well as police and members of the military have used intimidation tactics against those who have refused to sell their land.[29]

On May 6, 2014, local residents of Batang, Central Java province in Indonesia protested against the Batang power plant in front of the Batang State Attorney Office. The protests resulted in a violent class with local police. Protestors believe that the power plant would have negative impacts on the community near Batang.[31]

On May 1, 2015, a petition started to call the Indonesian president, Jokowi Widodo, to stop the construction of the Batang coal power plant. Citing how local villagers near Batang and rice farmers have refused to cooperate with the coal plant project, the petition demands that the Indonesian government stop “this dirty project.” The project is believed to eventually harm rice fields, destroy fisheries, and emit toxic air pollution.[32]

In May 2016, about 3,500 people staged a protest in the capital of Indonesia against the development of the Batang power plant. Organized by environmental groups, the protest started from the Japanese Embassy to the presidential palace.[33]

On March 30, 2017, activists stopped construction at the Batang power plant for 13 hours. Activists demand for the Indonesian government and the Japan Bank for International Cooperation (JBIC) to pull their financial support of the coal plant. The protestors are motivated by how the Batang plant would “contribute to 6500 premature deaths in Nindonesia every year linked to air pollution from burning coal.” Furthermore, local fishermen joined the activists’ blockade because the coal plant has made it harder to catch fish.[34] Activists from Greenpeace, Indonesian Forum for Environment (WALHI) and Mining Advocacy Network (JATAM) also joined the blockade of the coal plant.[35]

In July 2013 Bloomberg reported that the plant was delayed due to difficulties acquiring land, environmental assessments, and local opposition. As a result of the problems, the onset of construction was reportedly postposed by two years, from October 2012 to October 2014.[1] According to a spokesman for J-POWER, 80 percent of land needed for the project had been acquired.[1] 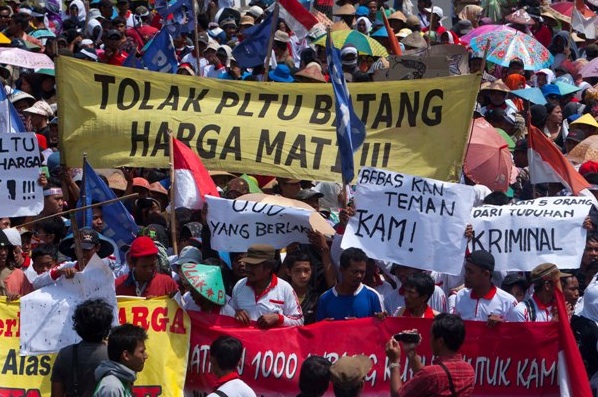 According to a July 2013 story in the Japan Times, around 50 landowners at the project site were refusing to sell 40 hectares, an amount of land amounting to 20 percent of the land needed to build the project. If the land purchase was not completed by October 6, the sponsors of the project would lose the right to build the project and a new round of bidding would need to be conducted. According to an unnamed Indonesian official, completing the acquisition by the October deadline would be virtually impossible.[36] According to a report in the environmental blog Mongabay, opponents of the plant were disputing government claims regarding the amount of land that had been secured. Roidhi, a resident of Karanggenang, one of the villages affected by the project, told Mongabay that "70 percent of our land still belongs to us." "When you look at the data mentioned by Hatta Rajasa...and Lucy Eko Wuryanto it is very clear that the data mentioned is a mere claim. Each person is reporting different data," said Wahyu Nandang Herawan, a staff member of Lembaga Bantuan Hukum (LBH) Semarang, a legal aid organization that has been working with the community. [29]

In October 2013, a decree by President Susilo Bambang Yudhoyono revised a regulation that required the project one year after signing its contract to secure financial backing. Following the extension, the Jakarta Post reported that the consortium sponsoring the project and the government "are working on a persuasive approach to win the hearts of local residents." Garibaldi Thohir, president of Adaro Energy, said, "The important thing now is how to approach the community. I myself, along with Pak Ganjar will take part in the socialization program." Ganjar Pranowo is the governor of Centra Java.[37]

In a statement, BPI said the consortium had acquired more than 85 percent of the land needed for the project as well as approval for its environmental impact assessment and other necessary permits but, "due to the instability of the situation at the site, the acquisition of the remaining plots of land are beyond the reasonable ability of a private company, like BPI, to acquire and may be acquired only with government support.”[2]

BPI is committed to continue the project, the statement said.[2]

Originally the project was estimated to cost US$3.2 billion. In October 2013, Boy Garibaldi Thohir, president director of Adaro Energy, said that the cost of the project had risen significantly. Boy declined to state an exact figure but said that the total was not more than $5 billion. The cost increases have delayed the financial closing of the project.[38]

The project will use ultra-supercritical technology, which offers combustion efficiency of 43 percent. The relative reduction in carbon dioxide emissions provided by the high efficiency of the combustion technology has been cited by Japan's prime minister Shinzo Abe, among others, as an argument for constructing the plant.[39] According to the Nikkei Asian Review, promoting of ultra-supercritical technology as a climate change solution is linked to Japanese government efforts to assist Japanese businesses against Chinese rivals for coveted overseas power plant construction contracts. "We want to make the Central Java project a showcase that will open the door to more projects," said an official at Japan's Ministry of Economy, Trade, and Industry.[40]

Retrieved from "https://www.gem.wiki/w/index.php?title=Central_Java_Power_Project&oldid=248033"
Categories:
This page was last edited on 2 June 2021, at 19:57.
Content is available under Creative Commons Attribution-NonCommercial-ShareAlike unless otherwise noted.
Privacy policy
About Global Energy Monitor
Disclaimers