In its 2020 Integrated Resource Plan's base case scenario, Duke used a 2049 retirement year for the plant (this was not a commitment to retire the coal plant and simply dates for planning purposes).[4] Under the plan, Duke would reportedly retire all of its power plants in the Carolinas that "rely exclusively on coal" within the next 10 years and add between 1,050 MW and 7,400 MW of storage to its portfolio under six scenarios outlined.[5]

The Duke Energy Cliffside plant has been one of the most controversial in the nation. Although Duke Energy chairman Jim Rogers is an active proponent of legislation to address global warming, Duke continues to pursue development of new coal power plants.[7]

Duke Energy originally proposed two new 800 MW units at its Cliffside plant in North Carolina. In February 2007, the North Carolina Utilities Commission approved one unit and rejected the other [8]; in June 2007, the commission denied a request for reconsideration of this decision.

On May 5, 2009, NC WARN filed a motion with the North Carolina Utilities Commission to revoke Duke's certificate of public convenience and necessity because the new unit is no longer in the public interest.[10]

In Dec. 2007, representatives of the National Park Service and the U.S. EPA warned that state environmental regulators were approving the project too quickly and with too little oversight.[11]

In a landmark decision on November 13, 2008, the US EPA's Environmental Appeals Board (EAB) ruled that the EPA has no valid reason for failing to limit carbon dioxide emissions from new coal-fired power plants.[12] The lawsuit was brought by The Sierra Club in October 2007 to challenge the permitting of the Bonanza Power Plant addition, after the U.S. Supreme Court ruled that the EPA has the authority to regulate greenhouse gas emissions. In its decision, the EAB sided with the Sierra Club, declaring that because the Supreme Court ruling defined carbon dioxide as a pollutant under the Clean Air Act, new coal-fired power plants must implement "Best Available Control Technology" (BACT) for CO2. Environmentalists and lawyers representing industry groups claim the ruling will have a national effect and may stop the permitting of numerous coal plants.[13]

In North Carolina, environmentalists quickly jumped on the ruling, hoping it will help in the long-running legal fight to stop the Cliffside plant. John Runkle, an attorney for one of the groups opposing the plant, commented, "The weight against building new coal plants is growing. This certainly will help us." Attorneys filed a new motion on November 14. Administrative Law Judge Randall May heard testimony in the case on November 17.[14]

In December 2008, a ruling by a federal judge in Asheville, N.C. revoked the Cliffside plant's air quality permit because it does not meet Maximum Available Control Technology (MACT) regulations for mercury. An earlier ruling by a D.C. circuit court found that the EPA’s 2005 mercury rule was illegal because it evaded mandatory cuts in toxic mercury pollution. Duke Energy has 70 days to update the plant's technology to comply with the MACT. If Duke misses the deadline, the court has the ability to halt plant construction.[15]

In September 2009, the North Carolina Utilities Commission held a public hearing on Duke's proposed rate increase of 12.6 percent for its North Carolina customers. Duke says the increases are necessary to recoup $4.8 billion in capital spending, which includes the amount spent to date on the Cliffside expansion. The utility commission's Public Staff, which represents utility customers, is opposed to the increase, describing it as unjustified. About two dozen people spoke at the hearing, most of whom were residents opposed to the rate hike and to the new plant. The commission is scheduled to begin hearing expert testimony on Duke's rate hike request ion October 19.[17]

On November 4, 2009, the N.C. Utilities Commission refused a request by the N.C. Waste Awareness and Reduction Network to stop the expansion of Duke’s proposed Cliffside coal power plant. N.C. Waste Awareness and Reduction Network asked the commission to revoke its 2007 approval of the plant because the expansion is no longer needed, and that Duke is building the proposed plant not to meet the electricity demands of state customers, but for potential sales of wholesale power. The commission denied the request, stating that the circumstances under which it had originally approved the plant had not changed since 2007.[18]

In April 2011, the 4th Circuit Court of Appeals affirmed affirmed district Judge Thornburg’s determination that Duke was subject to CAA section 112 for its construction of Unit 6, even though it obtained its permit and commenced construction under the Clean Air Mercury Rule. As a result, if it is determined that Unit 6 is a major hazardous air pollution source, it should be subject to the stronger new source MACT standards rather than the existing source standards under EPA’s recent proposal. The decision also specifically upholds the district court’s award of attorney’s fees and costs of over $470,000.[19]

In January 2009, Sue Sturgis of the Institute of Southern Studies compiled a list of the 100 most polluting coal plants in the United States in terms of coal combustion waste (CCW) stored in surface impoundments like the one involved in the TVA Kingston Fossil Plant coal ash spill.[20] The data came from the EPA's Toxics Release Inventory (TRI) for 2006, the most recent year available.[21]

Cliffside Plant ranked number 68 on the list, with 413,459 pounds of coal combustion waste released to surface impoundments in 2006.[20] 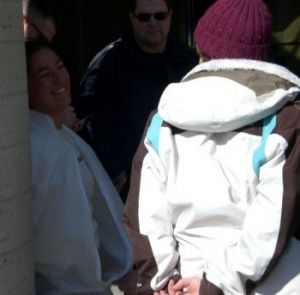 On November 15, 2007, two Warren Wilson College students dressed as polar bears chained themselves to the door of Duke Energy's headquarters in Charlotte, North Carolina, in protest of the Cliffside Plant. Several dozen people held a rally in support of their blockade, dressing as Santa Claus and elves and presenting a stocking full of coal to the company. The two students were arrested on charges of trespassing and disorderly conduct.[22][23][24]

On April 1, 2008, as part of the Fossil Fools International Day of Action, a group of North Carolina activists with Rising Tide and Earth First! locked themselves to bulldozers to prevent the construction of the Cliffside coal-fired power plant proposed by Duke in western North Carolina. Others roped off the site with "Global Warming Crime Scene" tape, and held banners protesting the construction of the plant. Police used pain compliance holds and tasers to force the activists to unlock themselves from the construction equipment. Eight people were arrested.[25][26]

Hundreds of people marched and rallied against Cliffside in Charlotte, N.C. The demonstration was organized by more than a dozen environmental, faith-based, and social justice groups, which are calling on Duke Energy and the state of North Carolina to cancel construction of the Cliffside plant. 44 activists were arrested.[27]

Activists dominated Duke Energy's annual shareholder meeting in Charlotte, NC. About 25 protesters gathered outside the company's headquarters, calling for Duke to cancel its proposed Cliffside plant. Inside the meeting, activists who own shares of the company grilled CEO Jim Rogers about the company's coal and nuclear investments.[28]

Two protesters locked themselves to a 1.5 million pound generator being delivered to Cliffside. The activists vowed to prevent the generator from reaching the Duke Energy plant. Protesters also displayed a large banner reading "Stop Cliffside" from the top of the generator. More than 20 activists attended the protest; four were arrested. The action was organized by Asheville Rising Tide and Croatan Earth First! as part of a national day of action with dozens of protests planned around the U.S.[29]

Retrieved from "https://www.gem.wiki/w/index.php?title=James_E._Rogers_Energy_Complex&oldid=385117"
Categories:
This page was last edited on 17 January 2023, at 15:54.
Content is available under Creative Commons Attribution-NonCommercial-ShareAlike unless otherwise noted.
Privacy policy
About Global Energy Monitor
Disclaimers