Rising Tide was formed in the Netherlands in 2000. It has become an international, grassroots network of groups and individuals who take direct action to confront climate change. The organization promotes decreasing dependence on environmentally destructive industries and institutions and instead advocates working toward community autonomy and sustainable living. 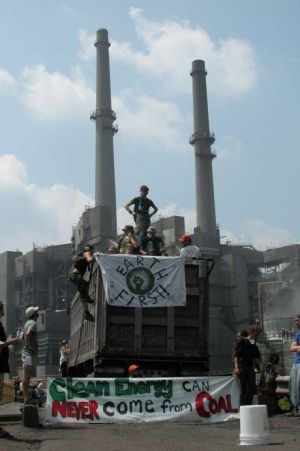 On July 10, 2006, 75 Earth First! and Rising Tide North America] activists blockaded an access bridge leading to American Electric Power's coal-fired Clinch River Power Plant near Carbo, Virginia. Several people stretched a rope across the bridge and suspended themselves off the bridge's edge; others waved a coal truck onto the bridge, blockaded it, deflated its tires, and locked themselves to the truck. The protestors demanded that Clinch River and other outdated coal plants be shut down, and that mountaintop removal coal mining be ended. After several hours in which coal trucks were unable to get into the plant, police agreed to make no arrests if the activists would dismantle their blockades.[1][2]

On April 1, 2008, as part of the Fossil Fools International Day of Action, four activists used lockboxes to block the entrance to a Bank of America branch in Boston, in protest of BofA's investments in coal mountaintop removal mining and new coal power plant development. Others held banners and signs in support of the action, which was organized with help from Rising Tide North America and Rainforest Action Network. Police used saws to cut through the lockboxes, and arrested the four blockaders.[3][4]

Early morning on September 15, 2008 around 50 peaceful protesters entered the construction site of Dominion Virginia's coal-fired Wise County Plant. Twenty protesters locked their bodies to eight large steel drums, two of which have operational solar panels affixed to the top that illuminated a banner reading "renewable jobs to renew Appalachia." In addition to those locked to the construction site, over 25 protesters from across the country convened in front of the plant singing and holding a 10'x30' banner, which said "we demand a clean energy future." Eleven were arrested. This action was organized by Mountain Justice, Blue Ridge Earth First!, Rainforest Action Network, Asheville Rising Tide, and Students for Democratic Society.[5]

Students, community groups, and activists held a public rally outside Bank of America's Harvard Square branch, protesting both Bank of America's and Citi's risky investment strategies, which have contributed to the current economic crisis and are jeopardizing the global climate. The demonstrators then marched to a nearby Citi branch, where four activists wearing t-shirts reading "Not with Our Money" locked themselves to the entrance.[6] The protest was organized by Rising Tide Boston and City Life/Vida Urbana.[7] 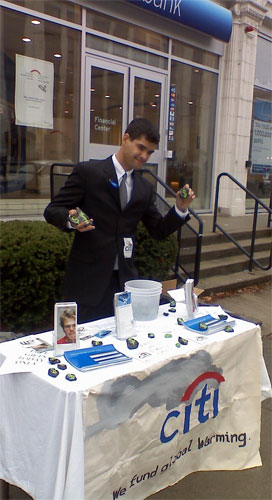 Rising Tide Boston hands out samples of "green coal" at Citibank and Bank of America.

On Halloween, a group of zombies teamed up with Rising Tide Boston in a march to local branches of Bank of America and Citi, in protest of the banks role in mountaintop removal mining.[8]

As part of the National Coal Finance Day of Action, members of Rising Tide Boston set up outside Bank of America and Citibank branches to highlight the primary role these banks play in financing in coal power and mining. The activists handed out samples of "green coal" to imitate the coal industry's marketing pitch of "Clean Coal." According to one activist's pitch, "Although we’ve spent a lot of time and resources researching ways to make coal environmentally friendly, or ‘clean and green’, the best way we found to do it is to paint it green."[9]

Seven activists from Rising Tide Boston disrupted a lecture given by Arch Coal CEO Steve Leer at Harvard University. Leer was speaking about the future of "clean coal" technology. The activists interjected information on the impacts of coal extraction, including their final question, "What gives you the right to gamble the future of civilization on a magic technology that doesn’t exist?" While Leer tried to ignore the question, two members of Rising Tide carried a banner on stage that read "The coal bubble is bursting - Clean Coal is a Dirty Lie." The lecture was funded by Bank of America, the single largest financial backer of mountaintop removal.[10]

On Valentine's Day, Rising Tide Boston and City Life/Vida Urbana called for account holders to "break up with Bank of America." The two groups hosted a day of account closures at the Copley Square and Fields Corner Bank of America branches, highlighting connections between the current financial, foreclosure, and climate crises. A street theater version of the Jerry Springer show (with guests Ivanna Goodbank, Vida Urbana, and Bo America) took place at the Copley Square branch.[11]

Two protesters locked themselves to a 1.5 million pound generator being delivered to the Cliffside Plant in North Carolina. The activists vowed to prevent the generator from reaching the Duke Energy plant. Protesters also displayed a large banner reading "Stop Cliffside" from the top of the generator. More than 20 activists attended the protest; four were arrested. The action was organized by Asheville Rising Tide and Croatan Earth First! as part of a national day of action with dozens of protests planned around the U.S.[12]

Five activists with Northern Rockies Rising Tide disrupted a Montana State Land Board meeting about leasing Otter Creek Coal Tracts.[13] Linda McCulloch moved to accept a Ark Land Company's bid for the tracts following two hours of public comments.[13] After McCulloch's motion, the activists sat down in front of the room and linked arms.[13] They were arrested and removed from the room.[13] The Land Board proceeded to approve the lease for just almost $86 million, or 15 cents per ton of coal.[13]

On Sunday, April 2, 2011, activists affiliated with Portland's Rising Tide chapter targeted major banks in the Portland metro areas as a call to them to divest from the fossil fuel infrastructure, including coal. The banks included Wells Fargo and Bank of America for this investments in practices such as mountaintop removal. Some participants staged a "die-in" on sidewalks while others used mud to stick "dirty money" to bank walls and windows, letting customers know the banks were "closed for climate crimes". No arrests were reported.[14]

On August 15, 2011 fifteen people were arrested in St. Louis, Missouri while protesting the practices of Bank of America (BoA) and Peabody Energy. Over a hundred people marched in protest of BoA's coal investments and Peabody's coal mining activities. The arrests occurred in a downtown St. Louis intersection that connects Bank of America’s regional offices and Peabody’s world headquarters. The actions were carried out by Midwest Rising! Convergence, a group associated with Rising Tide North America.

Activist Scott Parking wrote, "Midwest Rising was a convergence for climate and economic justice that brought together a diverse coalition of groups fighting home foreclosures in cities like Chicago, St. Louis and Pittsburgh, communications workers on strike against Verizon Wireless, local labor organizers, Appalachian activists fighting mountaintop removal and climate justice activists from around the world."[15]

May 2012: Activists vow to target coal in Wyoming

In May 2012, coal activists in Wyoming said they were planning a number of confrontational civil disobedience protests throughout the summer against coal mines in the Powder River Basin. The group, dubbed West By Northwest, set up an action camp near Cheyenne that would be a "place to build constructive solutions to preventable human and environmental catastrophes related to coal exports."[16]

The goal of the protests, said a High Country Rising Tide leader associated with organizing the events, is to interrupt business at the mines with “arrestable” activities.[17]

However, in early July 2012, it was announced that the protests were canceled due to a lack of readiness for the event. Rising Tide, the organizer for the canceled protests, said they were shifting their resources to support opposition against the Montana Land Board in Helena and development of the Otter Creek coal mine.[18]

Retrieved from "https://www.gem.wiki/w/index.php?title=Rising_Tide_North_America&oldid=147868"
Categories:
This page was last edited on 25 December 2019, at 22:41.
Content is available under Creative Commons Attribution-NonCommercial-ShareAlike unless otherwise noted.
Privacy policy
About Global Energy Monitor
Disclaimers