Crudos Pesados Oil Pipeline, known locally as Oleoducto de Crudos Pesados or by its Spanish initials OCP, is an oil pipeline in Ecuador.[1]

The Oleoducto de Crudos Pesados (OCP) runs from Lago Agrio near the oil fields of Ecuador's Oriente region to the Balao Oil Terminal in Esmeraldas, on the Pacific coast.[2] The pipeline has four pumping stations and two pressure reduction stations: Amazonas Terminal and Cayagama Station in Sucumbíos province; Sardinas Station in Napo province; Páramo Station, located between the provinces of Napo and Pichincha; and Puerto Quito and Chiquilpe Stations, in Pichincha province.[3][4][5] The pipeline crosses the Amazon Jungle, the Andes, and numerous natural reserves on its route to the Pacific Coast.[6]

The OCP crude oil pipeline is Ecuador's second largest pipeline and transports around 30% of the country's oil production.[12] The 295-mile, 450,000 bbl/d OCP mostly parallels the route of the SOTE Oil Pipeline[2], carrying oil from the Amazon region fields to the Balao oil terminal on the Pacific coast. The OCP was commissioned in 2003. In 2005, EnCana sold its stake to the Andes Petroleum Company (Petroecuador).[1]

In 2022, OCP asked the Ecuadorean Ministry of Energy to expand its concession in Ecuador, allowing the pipeline to operate beyond the original contract end date of January 12, 2024.[13]

Since its inception, the OCP pipeline has faced heavy criticism from civil society groups inside and outside the country.[14] The pipeline snakes its way through an extremely sensitive ecosystem inhabited by various indigenous groups while also traversing geologically unstable landscapes. The pipeline's route passes 94 fault lines, six volcanoes, multiple waterways, and rain forests.[15] The volcanoes passed are Reventador, Antisana, and the volcanic complex of Chacama, Guagua Pichincha and Pululahua. The Guagua Pichincha is of particular concern given that it erupted in 1999. A more violent eruption could mean that the pipeline would be exposed to ashes, landslides and lava flows.[16]

Environmental groups worry about a number of ecological problems which the pipeline might exacerbate, including soil erosion, landslides, and negative effects on soil fertility; according to environmentalists and other concerned groups, the company's efforts to ameliorate the negative effects to the soil have been insufficient. The pipeline has also had a deleterious effect on water sources. During the pipeline's construction, 157 ponds, springs, and drinking water sources were contaminated, with some farmers complaining that wells on their land had been contaminated or that their water supply had been blocked by construction upstream.[17] Rivers which would be affected by potential spills from the pipeline are the Cinto (with its tributaries Cristal, Verde, and Saloya), the Mindo (with its tributaries Nambillo and Canchupi), and the Blanco, where the Mindo and Cinto meet, which in turn flows to the Guayllabamba and Emeraldas Rivers.[18]

Construction costs for the Crudos Pesados Oil Pipeline project were estimated to be $1.3 billion.[19] In 2000, the IMF approved a $300 million loan to Ecuador, which subsequently led to $425 million from the World Bank and $625 million from the Inter-American Development Bank. In order to receive the funds, Ecuador, which was saddled with $15.7 million in debt, was required to meet conditions set by the IMF and other international financial institutions.[20][21] One precondition in the agreement was passage of the Economic Transformation Law, which allowed private companies to build and operate pipelines in Ecuador. The preconditions of the loan for the capital-strapped and debt-ridden nation paved the way for rapid construction of the oil pipeline and privatization of parts of the oil sector, which would threaten Ecuador's portion of the Amazon rain forest.[21] In 2003, another loan was approved by the the IMF in the amount of $205 million.[22] As part of this conditional loan, Ecuador's congress passed the Fiscal Responsibility and Transparency Law, which allocated 70 percent of OCP revenue to paying off the country’s debt and 20 percent into a fund that would be used for spending (including debt payback); in case of a sharp drop in oil prices or natural disaster. 10% would be used for social spending.[21]

In April of 2003, machinery being used to construct the OCP pipeline created a rupture to the neighboring SOTE pipeline. The incident caused a oil to spill into the Cayambe Coca Reserve. The spill reached the Papallacta lagoon and covered almost half its surface. The Papallacta lagoon supplies up to 60% of Quito's drinking water.[23] The spill reportedly dumped up to 10,000 barrels of oil.[24]

In February 2009, a rupture occurred in Santa Rosa, Ecuador, spilling 14,000 barrels of oil. The spill contaminated the Santa Rosa River, not only potentially harming wildlife and the surrounding environment, but also drinking water for nearby residents.[25]

In April 2013, a leak occurred in Esmeraldas, spilling over 5,500 gallons of oil contaminating the Winchele estuary.[26]

Smartec installed a strain monitoring system for early warning to ground movements at critical sites along the path of the pipeline which runs through 94 fault lines, six volcanoes, various waterways, and rain forests.[27]

In April 2020, a landslide in the Ecuadorian Amazon ruptured the pipeline, requiring construction of a new 1.7 km section to detour around the slide. Ecuador was forced to suspend oil exports for nearly a month as crews worked around the clock to clean up the spill and restore service by early May.[28]

In February 2021, pipeline operator OCP reported that it was constructing a 500-meter bypass near El Reventador as a preventive measure to maintain the pipeline's integrity after heavy rains and erosion led to landslides in the area.[29]

In December 2021, the pipeline suspended operations due to ongoing erosion and made plans for a pipe variant to avoid the worst of the erosion in order to continue operations in 2022.[30] 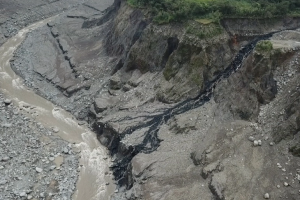 In January 2022 heavy rains caused a mudslide that ruptured the OCP pipeline, creating another major spill that contaminated the Coca River, impacting indigenous communities and a protected area of Cayambe-Coca National Park.[31][32][33] The pipeline resumed operations in early February, 11 days after the initial rupture.[34]

In September 2022, another spill contaminated the Teteye River in the province of Sucumbíos, allegedly due to an intentional pipeline cut by saboteurs.[35] OCP Ecuador announced that the spill had been brought under control by October 14.[36]

Up until the pipeline's operations commenced, there was both local and global opposition to the project. In Mindo, Ecuador residents, students, and ecologists occupied an area in the Los Guarumos area at the entrance of the Mindo Nambillo Protected Forest. Activists installed themselves in the most fragile section of the forest to block the construction crews of the OCP Heavy Crude Pipeline from entering the protected area. Protesters built tree houses and tied themselves to trees in order to facilitate the blockade.[37]

In February 2002 residents and striking OCP construction workers in the Northern Amazon were attacked by government forces after a protest demanding fair and just compensation for the serious impacts of the pipeline and pumping station and much needed funds for roads, hospitals, reliable electricity service and clean running water. Demonstrators erected roadblocks and occupied over 60 oil wells and 5 refineries, halting all construction on the pipeline and bringing oil production in the region to a near standstill. There were reports of fatalities caused by the violent crackdown.[38]

For the two decades the pipeline has been operational, locals have been pushing back against company and governmental forces which have allowed operations to continue despite damage to the ecosystem. 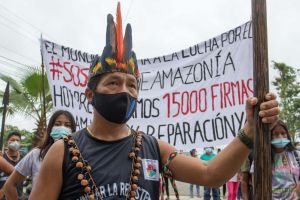 Kichwa people protesting on the one year anniversary of a massive oil spill. Source: Amazon Frontlines

Environmentalists cite the landslide-induced April 2020 rupture of the OCP pipeline and the neighboring SOTE oil pipeline as evidence of the ecological risks posed by energy projects in such a seismically active area.[10]

In 2021, Kichwa Indigenous Peoples asked for reparations from OCP for oil spills on their ancestral lands.[39][40][41] The Kichwa people have also been using their story to bring attention to the environmental and social disaster that the oil spills have created.