Background on the Plant

The first steps to develop DOSAB were taken in 2014. The first EIA (Environmental Impact Assessment) report was submitted in June 2014[2] and was approved on July 23, 2015.[3] Opponents of the plant argued that it would be too close to the Bursa city center and would be threaten public health. Professional chambers, academicians, health professionals, unions, and non-governmental organizations formed the Platform Against DOSAB Coal Plant (DOSAB Termik Santraline Hayır Platformu)[4] as a part of Break Free Movement in Turkey. The platform successfully challenged the plant's permit in court and as a result, the court cancelled the positive EIA decision on May 2016.[5]

However, in a few weeks the company had submitted a second EIA report and got approval on July 2016.[6] The Platform Against DOSAB Coal Plant took the EIA approval to the court once again but their case was rejected in January 2018.[3] 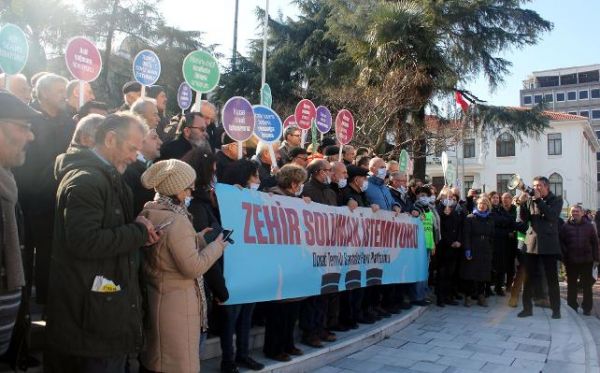 Members of the citizen group 'DOSAB Termik Santraline Hayır Platformu' gather in front of the Atatürk Monument in Bursa city to protest the plant, January 2018

After this rejection, citizens' opposition escalated; members of 'DOSAB Termik Santraline Hayır Platformu' wore masks over their faces at a demonstration in January 2018 to protest the plant.[7] Numerous local governments also objected to the plant; Nilüfer Municipality (a town in Bursa) had already opposed the plant back in October 2016,[8] Bursa's Governor İzzetin Küçük expressed his opposition mainly due to the air pollution impacts in March 2018,[9] and Bursa Metropolitan Municipality listed its oppositions in a July 2018 report that was approved by all members of the Bursa City Council.[6]

The case of the proposed DOSAB plant is unique and interesting; despite the company receiving an EIA approval from the Ministry of Environment and Urbanisation, as Bursa governor[10] and the municipality[11] do not approve the required changes to the city plan for construction, and the plant is on hold. As of December 2018, the electricity generation pre-licence was marked as ended on EMRA's website.[12]

As of May 2021 the project had not advanced in more than four years, and appears to be cancelled.

Back in 2015, the company claimed that air quality would be improved as individual generate steam generation plants would be collected in one place, DOSAB plant.[1] That claim increased opposition to the plant, especially from the health sector and Bursa Chamber of Medicines, who worried about the precedent of building a plant so close to the city center. The issue was brought to the Turkish Parliament several times[13] [14] when representatives of all political parties in the Parliament voiced opposition.[15]

Retrieved from "https://www.gem.wiki/w/index.php?title=DOSAB_cogeneration_plant&oldid=246386"
Categories:
This page was last edited on 25 May 2021, at 16:56.
Content is available under Creative Commons Attribution-NonCommercial-ShareAlike unless otherwise noted.
Privacy policy
About Global Energy Monitor
Disclaimers