A solar power plant was also built on the site originally secured for the construction of the coal-fired power plant.

The map below shows the location for the proposed plant in Dangjin.

On December 31, 2015, SK Gas disclosed it had bought an additional 6% stake in the project from the state-run Korea East-West Power Corporation to give it 51% of the joint venture. (Korea East-West Power still has a 34% stake in the project and Korea Development Bank the remaining 15% share.) In December 2014, SK Gas bought a 45% stake in a project from Dongbu Construction and had the right to buy shares from other shareholders if they wanted to sell them.[3]

At the time it gained majority control in the company, it was reported that "by acquiring additional stakes in Dangjin Eco Power, SK Gas can secure stable management control."[3]

However, in July 2016, it was reported the project was one which had been unable to raise bank finance in the absence of a government decision on power pricing details.[4]

In late July 2016, a protest[5] and one-week hunger strike in front of the Ministry of Energy building in Seoul prompted the South Korean Government to postpone consideration of the 1160 MW ‘Dangjin Eco Power’ plant. The participation of the Mayor of Dangjin in the hunger strike was a critical factor in defering the decision.[6] (A photo gallery by the Korean Federation for Environmental Movements of the July 2016 protest against the proposed plant is here.) 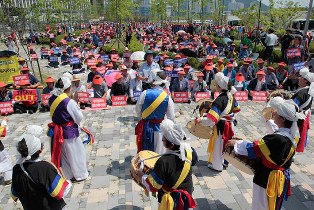 In October 2016, Jieon Lee of Friends of the Earth Korea/ Korea Federation for Environmental Movements described the status of the project as follows:[7]

A coal-fired power plant proposed by industrial conglomerate POSCO is likely to be cancelled by South Korea’s Minister for the Environment on the grounds it would be inconsistent with the government’s commitment to reduce greenhouse gas emissions and cut deadly fine particle air pollution.
POSCO had proposed the construction of a 500 megawatt (MW) coal-fired plant at its vast Pohang Steel Industrial Complex in Pohang.
However, local residents and environmental groups opposed the proposed project as it would contribute to a worsening of air pollution which is already affected by both POSCO’s massive steelworks and the adjoining Pohang Port through which coal and iron ore are imported.
Across the country, deteriorating air quality has become a hot political issue. While the South Korean Government estimates between 30% and one-half of the country’s air pollution originates from China, the remainder comes from coal power plants, industry and domestic vehicle emissions.
A 2016 report by Greenpeace East Asia estimated the country’s existing coal plants caused an estimated 1100 premature deaths each year. Based on a methodology developed by Professor Daniel Jacob at Harvard University, it was estimated the construction of 20 more proposed coal units by 2022 would increase the death toll by a further 1020 a year.
With growing concern about air pollution the Government announced in June it would introduce new fine particle pollution control measures aimed at cutting emissions from private coal-fired power plants. The Korea Herald editorialised the government needed to “come up with genuinely extraordinary measures” to cut air pollution.
Ultimately the Ministry of Energy hedged its bets, stating it would only close 10 old coal-fired power plants with a capacity of 3300 MW by 2025. However, it also proposed to allow 20 new coal plants (18,100 MW), to be built by 2022.
Communities living with already high air pollution objected. In July 2016 an estimated 900 people protested against another proposed project, SK Group’s proposed 1160 MW ‘Dangjin Eco Power’ project. The protest and a one-week hunger strike prompted the South Korean Government to indefinitely postpone consideration of the project.
With growing public pressure the government grew wary about POSCO’s proposed Pohang project.
At a late September parliamentary hearing [in Korean] Environment Minister Kyeonggyu Jo stated “as the importance of greenhouse gas emissions reduction increases, the government has discussed about construction of coal power plant in Pohang with the point of view not to allow it.”
Jo also stated the Ministry of Trade, Industry, and Energy and the Ministry of Strategy and Finance agreed the proposed coal plant should be rejected when the standards on fine particle pollution are announced in late October.
Opposition to the proposed plant spans the political spectrum with Seo Hyeongsoo, a Member of the National Assembly (Democratic Party), voicing opposition to the project. According to the disclosed discussion documents between the Ministry of Environment and related agencies, released by Seo, the government decided to reject POSCO’s proposal to construct a coal-fired power plant.
The likely rejection of POSCO’s Pohang plant reflects not only the increasing strength of South Korea’s environmental movement and residents’ groups but the growing trend of countries to reject proposed coal plants as one of the easiest first steps to take in honouring their commitments under the Paris Agreement.

On April 3, 2017, the Ministry of Trade, Industry and Energy (MOTIE) called a meeting of its power generation project committee and approved the plan for the Dangjin Eco Power plant. The project still needed final approval by the minister. In response, representatives of the Korea Federation for Environmental Movements (KFEM) held a press conference outside the Board of Audit and Inspection in central Seoul and submitted an official request that the board investigate the government’s decision. KFEM said the approval was made to benefit the corporate sponsors, not the public, and was rushed through before a new president was to take office, with several leading candidates pledging to deny permission for the plant.[8]

South Korea's new president, elected in May 2017, said he would consider suspending coal-fired power plants less than 10 percent into construction, which would include Dangjin Eco.[9]

In September 2017, the government released a statement saying it would push to transform coal-fired power plants less than 10% constructed into LNG-fired power turbines.[10]

According to the country's 8th Basic Plan for Long-Term Electricity Supply and Demand (2017-2031) finalized in December 2017, Dangjin Eco power station will be gas-fired. All other proposed coal-fired units in the country will remain coal.[11][12]

On January 17, 2018, SK Gas approved the agenda to promote the conversion of the 1160 MW coal plant to two 1000 MW gas plants in Chungbuk province and Ulsan, Gyeongbuk province.[13]

In 2020, Dangjin Eco Power completed a solar power plant of 9.8 MW and ESS 24.6 MWh on a site of 303,965 square meters to produce 13,000 MWh of electricity annually. Korea East-West Power, SK Gas, and Korea Development Bank invested 54 billion won in the solar power plant of Dangjin Eco Power, which was built on the site originally secured for the construction of the coal-fired power plant. Instead of coal-fired power generation, SK Gas secured a business right to build a 1.2GW LPG+LNG power plant in Ulsan and was proceeding with the construction work until 2024.[14]

Retrieved from "https://www.gem.wiki/w/index.php?title=Dangjin_Eco_power_station&oldid=276823"
Categories:
This page was last edited on 16 November 2021, at 17:17.
Content is available under Creative Commons Attribution-NonCommercial-ShareAlike unless otherwise noted.
Privacy policy
About Global Energy Monitor
Disclaimers