Druzhba Oil Pipeline, also known as the Friendship Pipeline and Comecon Pipeline, is the world's longest oil pipeline and one of the biggest oil pipeline networks in the world. It carries oil some 4,000 km from the eastern part of the European Russia to points in Ukraine, Belarus, Poland, Hungary, Slovakia, the Czech Republic and Germany.[1] The network also branches out into numerous pipelines to deliver its product throughout Eastern Europe and beyond. The name "Druzhba" means "friendship," alluding to the fact that the pipeline supplied oil to the energy-hungry western regions of the Soviet Union, to its "fraternal socialist allies" in the former Soviet bloc, and to western Europe. Today, it is the largest principal artery for the transportation of Russian (and Kazakh) oil across Europe.

The pipeline runs from Almetyevsk in Tatarstan, Russia, and branches off to Ukraine, Belarus, Poland, Hungary, Slovakia, Czech Republic, and Germany.[2]

On 18 December 1958, the 10th session of the Council for Mutual Economic Assistance (Comecon ), held in Prague, adopted a decision and an agreement was signed on construction of a trunk crude oil pipeline from the USSR into Poland, Czechoslovakia, East Germany (GDR) and Hungary.[6] The construction of the initially proposed 5,327-km long pipeline commenced in 1960.[7] Each country was to supply all necessary construction materials, machinery and equipment. Oil first reached to Czechoslovakia in 1962, to Hungary in September 1963, to Poland in November 1963, and to GDR in December 1963. The whole pipeline was put into operation in October 1964. The first oil pumped through the Druzhba pipeline originated from the oil fields in Tatarstan and Samara (Kuybyshev) Oblast. In the 1970s the Druzhba pipeline system was further enlarged with the construction of geographically parallel lines.[8]

The pipeline begins from Almetyevsk in Tatarstan, the Russian heartland, where it collects oil from western Siberia, the Urals, and the Caspian Sea. It runs to Mozyr in southern Belarus, where it splits into a northern and southern branch. The northern branch crosses the remainder of Belarus across Poland to Schwedt in Germany.[6] It supplies refineries in Płock and in Schwedt. The northern branch is also connected by the Płock-Gdańsk pipeline with the Naftoport terminal in Gdańsk, which is used for oil re-exports.[9] In Schwedt the Druzhba pipeline is connected with the MVL pipeline to Rostock and Spergau.

The southern branch runs south through Ukraine. In Brody the Druzhba pipeline is connected with the Odessa–Brody Oil Pipeline, which is currently used to ship oil from the Druzhba pipeline to the Black Sea. In Uzhgorod the pipeline splits into lines to Slovakia (Druzhba-1 - original Druzhba route) and to Hungary (Druzhba-2). The line through Slovakia is divided once again near Bratislava: one branch leading in a northwest direction to the Czech Republic and the other going southward to Hungary. The Druzhba-1 pipeline branches off toward Hungary in Banská Bystrica Region (Slovakia) near the river of Ipeľ, crosses the Hungarian border at Drégelypalánk and leads to Százhalombatta.[6] In Hungary, the Druzhba-1 pipeline supplies Duna refinery while Druzhba-2 supplies Duna and Tisza refineries.[10]

The ORLEN Lietuva in Lithuania and Ventspils oil terminal in Latvia are connected to the main pipeline by the branch pipeline from Unecha junction in Bryansk Oblast. This branch ceased operation in 2006.

The pipes for the project were manufactured in the Soviet Union and Poland, while fittings were manufactured in Czechoslovakia. The GDR was responsible for pumps and Hungary provided automation and communication equipment. The construction cost nearly 400 million rubles and comprised of nearly 730,000 tons of pipe.[7] The Druzhba pipeline currently has a capacity of 1.2 to 1.4 million barrels per day. Work is currently underway to increase this in the section between Belarus and Poland. The pipe diameter of the pipeline varies from 420 to 1,020 mm.[8] It uses 20 pumping stations.

The Russian part of the pipeline is operated by the oil company Transneft through its subsidiary OAO MN Druzhba. The operator is Gomeltransneft Druzhba in Belarus, UkrTransNafta in Ukraine, PERN Przyjazn SA in Poland, Transpetrol AS in Slovakia, Mero in the Czech Republic, and MOL in Hungary.[12]

For the last several years, Russia and Ukraine have been tied up in transit fee disputes as the major pipelines supplying Europe with Russian oil and gas run through Ukraine. The Russia–Ukraine continuous disputes were primarily based on transit of natural gas. On December 28, 2009, referring to Russia's announcement, Slovakian government said Russia issued warnings that it would stop oil supplies to Slovakia, Hungary and the Czech Republic over a transit fees dispute with Ukraine.[13] However, the next day, Ukraine's Naftogas issued a statement confirming that Russia agreed to a 30 percent increase in the transit fees through Ukraine. The rise in the tariff was from $7.8 to $9.50 (or €6.6) per tonne of oil for transiting Ukraine in 2010 and was implemented due to the decision from the Russians to raise prices. Additionally, unlike previous payments, new payments will be made in Euros at the request of Ukraine. Also Ukraine needs substantial investments to update the network on its territory as the pipeline grows old. Russia and Ukraine also agreed on the volume of oil to be transported through Ukraine. The overall amount of oil to be transported to Slovakia, the Czech Republic and Hungary through Ukraine in 2010 was planned at 15 million tonnes - a decrease from 17.1 million tonnes in 2008.[14]

In April 2019 the pipeline was shut down after it was found to be transporting contaminated oil.[15] The contaminated oil contained 330 parts per million (ppm) of organic chlorides versus a usual level of 10 ppm.[16] In May 2019 the site of the contamination was found to be the Lopatino metering unit in the Samara region, and four Russians were arrested and charged under articles 158, 210 and 215.2 of the Russian criminal code.[17]

Oil resumed flowing through the pipeline in June 2019, though deliveries to Poland were temporarily halted after an increase in contaminants was detected.[18]

There have been proposals to extend northern branch of the Druzhba Pipeline to the German North Sea port of Wilhelmshaven, which would reduce oil tanker traffic in the Baltic Sea and make it easier to transport Russian oil to the United States. In 2007, German Oil Trading Gmbh (GOT) proposed to build a connection from Unecha to Wilhelmshaven with a possible branch to Polish and German oil refineries. The proposed connection would be 1,800 km long and would have capacity of 25 million tonnes of oil a year, which may be increased to 50 million tonnes. The expected cost of this project is US$2.5-billion.[19]

There have been no development updates and the project is presumed to be cancelled.

The expansion would run from the Druzhb Pipeline near Unecha, Russia to the German North Sea port of Wilhelmshaven.

The Druzhba-Adria Pipeline Integration Project is a proposal to extend the pipeline to pass through Hungary and Croatia to reach the Adriatic Sea at the deep-water port of Omišalj.

The Druzhba-Adria Pipeline Integration Project is a proposal to extend the pipeline to pass through Hungary and Croatia to reach the Adriatic Sea at the deep-water port of Omišalj. 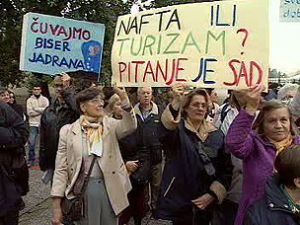 The proposal was touted by the Croatian President Stipe Mesić but it also garnered substantial negative press due to complaints from the environmentalist groups such as Eko Kvarner. The pipeline generated street protests and other visible mobilization in opposition to it.[20] Potential environmental impacts of the project include air pollution, biodiversity loss (wildlife, agro-diversity ), fires, food insecurity (crop damage ), loss of landscape/aesthetic degradation, soil contamination, oil spills, deforestation and loss of vegetation cover, surface water pollution / decreasing water (physico-chemical, biological) quality, groundwater pollution or depletion, and large-scale disturbance of hydro and geological systems.[20]

It is also proposed to connect Druzhba-Adria with the planned Pan-European Pipeline.[21]

Schwechat–Bratislava two-way oil pipeline project was proposed in 2003. It would supply the OMV owned Schwechat Refinery from the Druzhba Pipeline.[12]

There have been no development updates, and the last reporting appears to have been in 2009.[23] It is considered cancelled as of 2013.

The Baltic Pipeline System 2 (BPS-2) is a pipeline from the Unecha junction of the Druzhba Oil Pipeline near the Russia-Belarus border to the Ust-Luga Oil Terminal at the eastern part of the Gulf of Finland. It has a 172 km long branch line to Kirishi oil refinery.[25][26] The throughput capacity of BPS-2 is 30 to 50 million tonnes of oil annually.[27] The construction of the BPS-2 started on 10 June 2009.[28]

Wikipedia also has an article on the Druzhba pipeline). This article may use content from the Wikipedia article under the terms of the Creative Commons Attribution-ShareAlike 3.0 Unported License].