The original project of this pipeline was proposed by the Russian oil company Yukos in 2001 as an independent oil pipeline. The project proposed to build a pipeline from Angarsk, where Yukos operated a refinery, to Daqing in northern China.[1] At the same time, Transneft proposed an alternative project to pipe oil from Taishet in Irkutsk Oblast to the Far East port Kozmino near Nakhodka.[2] In May 2003, the Russian Government decided to combine these projects and that Transneft would be in charge of the pipeline, while Yukos would supply the oil.[3] On 29 May 2003, Russia and China signed an agreement on construction of the pipeline.[2] On 31 December 2004, the Russian government approved the construction of the pipeline from Taishet in East Siberia to Pervoznaya in the Pacific region.[4]

Construction of the pipeline started in April 2006.[5] On 4 October 2008, the section between Taishet and Talakan was launched in a reverse to pump oil from Surgutneftegas-owned Alinsky deposit.[6]

Phase I originates in Tayshet, Russia, and terminates in Kozmino, Russia.

Construction of the Phase II, also known as the Russia-China Crude Oil Pipeline, began in 2010 after the launch of Phase I. The second phase would run from Skovorodino to the Pacific Ocean.[9] In the meantime, oil was transported from Skovorodino to Kozmino by rail.[10] The second stage was inaugurated on 25 December 2012.[11]

In June 2009, Russia and China signed a deal to build the spur pipeline to China by which Russia supplies China with 15 million tonnes each year for 20 years in exchange for a loan worth US$25 billion to Russian companies Transneft and Rosneft for pipeline and oil fields development.[12] Construction of the spur to China started in the Russian territory on 27 April 2008 and in Chinese territory on 18 May 2009.[9][13] The 64 km long section from Skovorodino to the Amur River on Russia-China border was built by Transneft and the 992 km long section from Russia-China border to Daqing was built by the China National Petroleum Corporation.[9] It was completed in September 2010.[14] On 1 January 2011, Russia said it had begun scheduled oil shipments to China.[15]

Phase II runs from Skovorodino, Russia to the Amur River on Russia-China border, then to Daqing, China.

The 4,857-km pipeline is being laid by the route of Taishet-Kazachinskoye-Skovorodino, Skovorodino-Kozmino.[17] Because of environmental organizations' protests, the initial pipeline route was moved 40 km north of Lake Baikal. Instead of going through Buryatia, it was built through the Sakha Republic.[18] The Taishet to Skovorodino route is 2,757-km long, and the Skovorodino to Kozmino route is 2,100-km long.[17] The Skovorodino extension branch pipeline would extend through Mohe to Daqing, China.[19] The Phase II branch runs 64 kilometers from Skovorodino to the Amur River on Russia-China border, plus a 992-kilometer section from the Russia-China border to Daqing.

There is a plan to lay a parallel Yakutia–Khabarovsk–Vladivostok gas pipeline alongside the oil pipeline.[20][21]

The pipeline consists of 32 pumping stations, including 13 with tank farms with a total capacity of 2.67 million cubic meters. For feeding pumping stations with electricity, a 35 MW power station was built near the town of Olyokminsk in the Sakha Republic. It is fired by the crude oil from the ESPO pipeline. The power station is designed for independent operation in demanding Arctic temperature conditions.[25] The terminal at Kozmino has a tank farm with a capacity of 350,000 cubic meters. The loading capacity of the terminal is 300,000 barrels per day.[24][26]

The first stage was built by Systema SpecStroy, Krasnodarstroytransgaz, Vostok Story, Promstroy, Amerco Int. and IP Set Spb.[27][28] Five 16V32 crude oil-fired engines for the pipeline-related power station were delivered in summer 2008 by Wärtsilä.[25] The first stage of the pipeline cost US$12.27 billion and the export terminal cost $1.74 billion.[27]

The pipeline is supplied from the oil fields of Tomsk Oblast and the Khanty–Mansi Autonomous Okrug in Western Siberia along the existing Omsk–Irkutsk pipeline that joins the ESPO pipeline in Taishet, as well as oil provinces of Eastern Siberia. At the initial stage 22 million tons of oil is supplied by Rosneft and 8 million tons by Surgutneftegas. 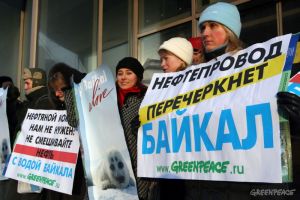 The pipeline drew opposition from a number of environmental groups and their supporters, including Greenpeace, UNESCo, and WWF, along with regional and local groups.[29] The opposition included street protests, petitions, and other visible mobilization against the pipeline, which ultimately contributed to a change in the first design of the pipeline as proposed by environmental organizations.[29]

In November 2010, one of the minor shareholders of Transneft, Alexey Navalny, accused the company for US$4 billion embezzlement during the construction of the pipeline.[30][30] These accusations were denied by Nikolay Tokarev, head of Transneft.[30]

In 2011, a dispute rose over payments for oil delivery through the pipeline. Transneft alleged that China National Petroleum Corporation (CNPC) violated its supply contract, an allegation that CNPC did not acknowledge. The contract stipulate the monthly volumes of oil according to the agreed price formula, which is less than the spot price of oil.[31][32]

The Russia-China Crude Oil Parallel Pipeline is the Chinese branch of the Eastern Siberia–Pacific Ocean Oil Pipeline and a parallel pipeline to Phase II. It's owned by the China National Petroleum Corporation and transports 15 mtpa over 942 kilometers. Construction began in 2016[35] and operations began in 2018.[36][37][38][39][33]

Wikipedia also has an article on the Eastern Siberia–Pacific Ocean oil pipeline. This article may use content from the Wikipedia articles under the terms of the GFDL.

Retrieved from "https://www.gem.wiki/w/index.php?title=Eastern_Siberia–Pacific_Ocean_Oil_Pipeline&oldid=291770"
Categories:
This page was last edited on 1 April 2022, at 03:51.
Content is available under Creative Commons Attribution-NonCommercial-ShareAlike unless otherwise noted.
Privacy policy
About Global Energy Monitor
Disclaimers