The map below shows the location of the plant's site, near Sugözü village, Yumurtalık district, Adana province. The project is close to the Mediterranean Sea in Yumurtalik, about 65 km from the center of Adana and 17 km from downtown Yumurtalik. Satellite photography from Planet shows construction occurring between January 2019 and June 2019.

In June 2012, Emba Elektrik Üretim applied to build a 1,200-MW coal-fired power plant in Yumurtalık district, where numerous other proposed coal plant projects are located.[1] An environmental permitting meeting held in Sugözü in September 2012 was met with protests from locals and environmentalists.[2] There was no news on the project for several years, and it seemed possible that it had been abandoned.

Along with numerous other proposals, the proposal was revived in 2014, as the 1,200-MW, two-unit Hunutlu plant. The plant would cost €1.2 billion, or $1.3 billion.[3] The project began the public comment period for environmental permitting in June 2014.[4] In 2015, the land was expropriated, with the price being set at 100 lira per square meter.[5]

On July 9, 2015, Emba Elektrik Üretim, a Turkish subsidiary of China's Shanghai Electric Power (SEP), gained the Construction and Generation License for the plant from the Turkish Energy Market Regulatory Authority, marking the project’s approval by the Turkish government for construction and operation.[6] 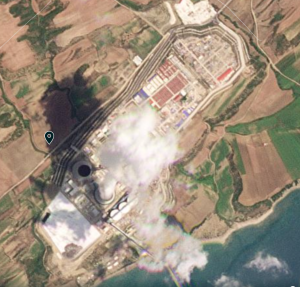 Planet imagery of the plant in late June 2022.

On October 26, 2017, an EPC Contract for the 2 x 660 MW Hunutlu Thermal Power Plant Project was signed by a consortium of China's State Power Investment Corporation and AVIC-INTL of China with EMBA. State Power Investment Corporation's subsidiary Shanghai Electric Power is in talks to finance the project at a cost of US$1.7 billion dollars. Shanghai Electric and Avic are both part of project sponsor Emba Elektrik Üretim.[7] The project will be constructed by CLP Power Engineering.[8]

According to February 2022 reports, a 43.4 MW wind farm and a 33 MW solar power plant will be installed at the Hunutlu Thermal Power Plant site.[11] The coal plant was still slated to come online by the end of 2022.[12] Planet imagery (right) captured on June 29, 2022 showed smoke being emitted from one of the power station's units.

Adana Ekoloji Dernegi are campaigning against this and other coal plants proposed for the Adana region.[13]

In June 2020, Turkish groups launched an international e-petition calling on Chinese banks involved in the project to stop their financing.[14] 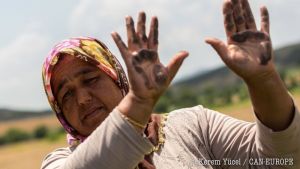 Emba Elektrik Üretim (EMBA Electricity Production Co. Inc.) describes itself "as a joint venture company invested by Chinese Shanghai Electric Power Co., Avic-Intl Project Engineering Company (a subsidiary of AVIC) and two Turkish local investors" who are "developing an imported coal fired thermal power plant project in Turkey with the capacity of 2x 660 MW with an investment amount of 1,7 billion USD."[15] In February 2018 the construction contract was reported to have been signed between the above named companies and EMBA Elektrik Üretim A.Ş. and CLP Power Engineering for 889.7 million USD.[16] Shanghai Electric Power, also known as SEP, is not to be confused with Shanghai Electric Group. SEP is owned by State Power Investment Corporation.[17] This means that the parent companies of the project are State Power Investment Corporation, AVIC International Holding Corporation, and two Turkish local investors.

According to campaigners, the site of the proposed coal plant is internationally protected under the Bern Convention on Conservation of European Wildlife and Natural Habitats (1979), especially regarding the preservation of the loggerhead sea turtle (Caretta caretta) and green turtle (Chelonia mydas).[18]

A June 2020 study from the Centre for Research on Energy and Clean Air estimates that the proposed EMBA Hunutlu coal plant would, when combined with emissions from other plants, result in over 100,000 people being exposed to high levels of air pollution. The study estimates the project would cause an estimated 2000 premature deaths over its operating life as well as depositing mercury across the Iskenderun Bay area affecting croplands and fisheries.[19]

In 2016, the project was subsidized 3500 million lira in the form of tax exemptions, and also imported hundreds of millions of dollars worth of tax free machinery.[20]

A court case has been ongoing in Ankara since 2018.[21] Related to this and other lawsuits concerning the port and plant construction, in February 2020 an expert report was published.[22] Its main findings are:

The financing for the estimated US$1.7 billion project has been expected to come via 20% equity and 80% debt. In April 2020, it was confirmed that a 15-year US$1.381 billion loan has been arranged for the project by China Development Bank, with Bank of China and Industrial and Commercial Bank of China (ICBC), two commercial banks, also participating in the loan.[23][24]

Retrieved from "https://www.gem.wiki/w/index.php?title=EMBA_Hunutlu_power_station&oldid=348468"
Categories:
This page was last edited on 29 June 2022, at 17:39.
Content is available under Creative Commons Attribution-NonCommercial-ShareAlike unless otherwise noted.
Privacy policy
About Global Energy Monitor
Disclaimers