The Line 10 Pipeline was first constructed in 1962.

The CAN$219-million Line 10 Westover Segment Replacement Project will replace 35 kilometers of existing 12-inch-diameter steel pipe with new 20-inch pipeline, running parallel to the existing line within the same right-of-way, to boost its capacity to 74,200 barrels per day (bpd).[3][4] Since November 2013, Line 10 has operated under a pressure restriction that limits its daily capacity to a maximum of 63,500 bpd.[3] The replacement project is expected to be placed in service in 2018.

In January 2017, the National Energy Board approved the replacement project.[4] 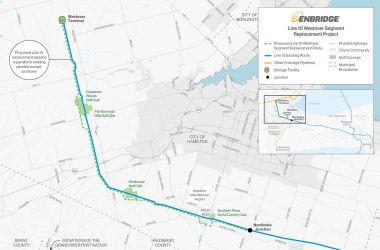 The Line 10 replacement project has generated opposition from local environmental groups and indigenous people and tribes.[4][5] Hamilton 350 has protested the pipeline over environmental concerns related to potential spills and the impacts of the pipeline on climate change. Several tribes have also asked the Supreme Court to overturn the NEB permit for the project.[5]

In May 2017, two Haudenosaunee men that had protested the pipeline replacement, asserting treaty hunting rights, were ordered by a Superior Court in Hamilton to pay Enbridge $25,381.81 in legal fees.[6] Enbridge claimed that there were "dozens" of incidents in which Todd Williams and Wayne Hill interfered with its work crews and dig sites.[6] Williams is an engineer with the Haudenosaunee Development Institute, part of the Haudenosaunee Confederacy Chiefs Council, who camped at sites and set traps. The Nanfan Treaty of 1701 signed with the British ceded Haudenosaunee land in exchange for hunting rights in the territory.[7]

Retrieved from "https://www.gem.wiki/w/index.php?title=Enbridge_Line_10_Oil_Pipeline&oldid=291498"
Categories:
This page was last edited on 24 March 2022, at 21:27.
Content is available under Creative Commons Attribution-NonCommercial-ShareAlike unless otherwise noted.
Privacy policy
About Global Energy Monitor
Disclaimers