In late 2021, construction was complete on the Line 3 Replacement Project, and the original Line 3 is presumed to have been retired.

In June 2020, federal environmental regulators fined Enbridge $6.7 million USD for allegedly violating a 2017 consent decree, saying the company failed to remedy pipeline-safety issues in a timely manner. The EPA noted, among other things, that Enbridge neglected to properly evaluate thousands of shallow dents on its Lakehead Pipeline System, which runs across northern Minnesota and through northwestern Wisconsin. The shallow dents indicate metal loss and cracking, and that the pipeline is in disrepair.[8]

According to the Minnesota Department of Commerce, Line 3 experienced 15 failures since 1990 that resulted in more than 50 barrels of oil spilled during each incident.[7] Corrosion and cracking has resulted in more than 950 excavations since 2000, and the pipeline "has had 10 times as many anomalies per mile as any other pipeline in the Mainline corridor" and is "susceptible to defects."[7]

The Line 3 Replacement Program will fully replace Line 3 with new pipeline and associated facilities, with an original expected placed-in-service date in 2019.[13] The existing Line 3 pipeline will be decommissioned. It is the largest proposed project in Enbridge history.[13] As of February 2020, the project is still considered to be in the proposal stage by Enbridge.[13]

Enbridge conducted an assessment of the Line 3 pipeline in 2013 that resulted in its decision to propose replacing the pipeline.[12] The replacement program would restore the pipeline, which is operating at only about half its capacity for safety reasons, to its full capacity.[14]

In June of 2019, the Minnesota Pollution Control Agency (MPCA) said it will not release its water-quality certification for the proposed replacement pipleine on July 1 as previously scheduled. The MPCA said it needs to consider an additional environmental review effectively ordered by the Minnesota Court of Appeals earlier this month. The appellate court earlier reversed the Minnesota Public Utilities Commission's (PUC) approval of the environmental-impact statement (EIS) for Line 3. The court deemed the EIS "inadequate" because it didn't properly address the impact of a potential future oil spill into the Lake Superior watershed.[15]

As of August 2019, the PUC has taken no action since June, apparently waiting on yet another court decision by the Minnesota Supreme Court. The Court is expected to rule by Sept. 3 whether it will hear a petition by pipeline opponents to overturn parts of the appeals court’s ruling that had affirmed the environmental statement. If the Supreme Court accepts the petition, the Line 3 process could be frozen for at least a year, causing lengthy delays for Enbridge’s construction plans. Even if the Supreme Court rejects the petition, fixing the environmental impact statement could take several months. And that means an important regulatory deadline in late October will almost certainly be missed.[16]

The project involves the restoration of Line 3 to historical capacity by replacing the pipe along most of the route, 365 miles in the United States. The entire replacement project will go from Edmonton, Alberta, Canada, to Superior, Wisconsin. As of June 2020 the project was awaiting regulatory approvals, but construction had already begun with service expected to begin in the second half of 2020.[17]

Under the U.S. component of the Line 3 Replacement Program, Enbridge is proposing to spend US$2.9 billion on 36-inch replacement pipeline spanning from Neche, North Dakota to Superior, Wisconsin.[12]

As of September 2017, Enbridge had obtained permits to construct the pipeline replacement in North Dakota and Wisconsin.[18] Construction began on a 12-mile section of Line 3 replacement in Wisconsin in the Summer of 2017.[19]

A Minnesota Department of Commerce (MDOC) analysis released in September 2017 found that the Line 3 Replacement Project was unnecessary for meeting long-term demand.[9] MDOC energy regulatory division manager Kate O'Connell testified that "The high socioeconomic costs [of the Line 3 Replacement Project] outweigh the minimal benefits to Minnesota..."[9] The Minnesota Public Utilities Commission is not expected to issue a final decision on the proposed pipeline until Spring 2018.[14][7][9]

In the U.S., the US$2.9-billion replacement initiative, known as the Line 3 Replacement Project, will consist of replacing existing 34-inch pipe with new 36-inch pipe for 13 miles in North Dakota, 337 miles in Minnesota, and 14 miles in Wisconsin. The Wisconsin portion was completed in 2018. As of June 2020, Enbridge was working with state and federal permitting agencies in Minnesota to finalize the permits required to start construction.[6]

In November 2020, Enbridge received a set of permits from Minnesota regulators that will allow it to push ahead with its Line 3 replacement project. The approvals clear the way for the U.S. Army Corps of Engineers to issue the remaining federal permits for the project. The Minnesota Pollution Control Agency (MPCA) noted in its announcement that it had placed its "most stringent" environmental protection conditions on the permits. Enbridge will be required to take "every precaution" to safeguard 730 acres of wetlands and more than 200 streams in northern Minnesota. To protect water quality, the 401 certification requires 35 specific conditions to ensure compliance with state water quality standards, including extensive mitigation and post-construction restoration requirements, seasonal restrictions, and protections for wild rice waters. According to MPCA Commissioner Laura Bishop, "The MPCA has used sound science and thorough analysis to ensure that necessary safeguards are in place to protect Minnesota's waters. The 401 certification requires Enbridge to meet Minnesota's extensive water quality standards instead of lower federal standards."[20] On November 23, 2020 Enbridge announced that it had obtained federal permits from the U.S. Army Corps of Engineers and that construction of the pipeline could now begin.[21] Construction began on Dec. 1, 2020, with an expected completion date of Q4 2021.[22] 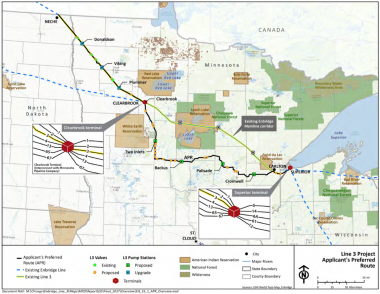 In February 2021, the Minnesota Court of Appeals on Tuesday denied a request by the Red Lake Band of Chippewa and the White Earth Band of Ojibwe to shut down construction of the project in northern Minnesota. The American Indian tribes said in their petition that construction would destroy land that is protected by treaty agreements and would violate cultural and religious rights. Other cases seeking to halt the project's construction remain in the appeals court.[23]

In a legal filing in June 2021, the US Justice Department affirmed the approval of the pipeline in 2020 by the US Army Corp of Engineers, and asked the court to reject arguments brought by tribes and environmentalists that the federal government failed to adequately assess the project's environmental impacts in Minnesota. Michael Brune, Executive Director of the Sierra Club, reacted in a statement to the Biden administration's backing for the project: "Allowing Line 3 to move forward is, at best, inconsistent with the bold promises on climate and environmental justice President Biden campaigned and was elected on ... The president must listen to frontline communities, defend the right of all people to clean water and a healthy climate, and act immediately to shut down this dirty tar sands pipeline".[24]

In July 2021, Hubbard County District Judge Jana Austad granted a temporary restraining order against Hubbard County Sheriff Cory Aukes and Hubbard County Land Commissioner Mark “Chip” Lohmeier. Indigenous activists opposing the replacement project filed the civil complaint on July 16, arguing that a June 28 blockade of the camp near Menahga was a violation of private property rights, including, in particular, an easement covering the driveway to the property.[25]

In July 2017, Minnesota Department of Commerce's tribal liaison Danielle Oxendine Molliver resigned from her position in protest of the Line 3 pipeline environmental review process.[26] Molliver said she was told she could only be a greeter and not answer questions about the pipeline's impact on Tribes after Enbridge complained to the Governor's office about her involvement.[26] Currently, the pipeline runs through the Leech Lake and Fod du Lac reservations in Minnesota. While the route of the proposed Line 3 would go around the reservations, it would run through a disputed area that the White Earth band claims is within its reservation, as well as areas "ceded" by Tribes in the 1800s where they maintain hunting and fishing rights.[14]

In August 2017, the Minnesota Department of Commerce published its final Environmental Impact Statement (EIS).[7] The EIS found that all of the Line 3 replacement project routes would have a "disproportionate and adverse effect on tribal resources and tribal members."[7] At least four of Minnesota's Ojibwe bands submitted comments on the draft EIS opposing the proposed Line 3 replacement project.[14] The final EIS further stated that Tribal members commented that "all of the proposed routes, including either keeping the current Line 3 in place or abandoning it, would add to the negative mental, spiritual, and physical health impacts already disproportionately suffered by American Indian populations."[7]

In August and September 2017, water protectors and other groups of protesters interrupted Line 3 replacement construction in Wisconsin on at least five separate occasions, resulting in at least 11 arrests.[27]

On February 4 of 2019, four climate activists in Blackberry Township, Minnesota closed safety valves on a crude oil pipeline belonging to the Canadian energy corporation Enbridge. This is an escalation of ongoing activism aimed at Enbridge, which is facing stiff resistance to their plan to build a new high capacity crude oil pipeline, Line 3, through Minnesota and across multiple Native American reservations. This marks the second time in just over two years that activists have shut down Enbridge pipelines, citing the urgency of climate change. The four activists broke into a fenced area containing emergency safety valves for Enbridge lines 1, 3 & 4. The activists, who are affiliated with the Catholic Worker movement, are Michele Naar Obed of Duluth, MN, Allyson Polman, Brenna Cussen Anglada, and Daniel Yildirim. The four were taken into custody by Itasca County Sheriffs at around 1:30pm. The three pipelines cross three Native American reservations and hundreds of miles of un-ceded treaty territory. In October of 2018 two activists were acquitted in Clearwater County court for a similar pipeline shut down. Those activists, Emily Johnston and Annette Klapstein, shut down Enbridge Lines 4 & 67 in a multi-state coordinated action in 2016 that closed down all the tar sands flowing from Canada into the United States. In their criminal trial, the activists set precedence in Minnesota court allowing climate activists to argue that their actions are justifiable due to the necessity of taking action on climate change.[28]

Reacting to Minnesota regulators' decision to issue permits to Enbridge in November 2020, Margaret Levin, director of the Sierra Club’s Minnesota chapter, commented: "The science is clear that Line 3 would threaten Minnesota’s clean water and set back our state’s progress on climate at a time when we can least afford it."[29] Following the announcement of the permitting, hundreds of Indigenous and other activists assembled outside the Minnesota Governer's Mansion to peacefully protest against the decision and to pledge further resistance to the project.[30]

Retrieved from "https://www.gem.wiki/w/index.php?title=Enbridge_Line_3_Oil_Pipeline&oldid=320687"
Categories:
This page was last edited on 24 May 2022, at 22:03.
Content is available under Creative Commons Attribution-NonCommercial-ShareAlike unless otherwise noted.
Privacy policy
About Global Energy Monitor
Disclaimers