Enbridge Line 6 Oil Pipeline is a major oil pipeline in the Enbridge Pipeline System, which conveys petroleum from western Canada to eastern Canada via the Great Lakes states. It consists of two separate pipelines, Line 6A and Line 6B. Line 6B resulted in the largest on-land oil spill in American history when in ruptured in July 2010, spilling more than one million barrels into a tributary of the Kalamazoo River in Michigan.

The Kalamazoo River oil spill, also described as The Dilbit Disaster,[3] occurred in July 2010 when Line 6B burst and flowed into Talmadge Creek, a tributary of the Kalamazoo River. A 6 foot break in the pipeline resulted in one of the largest inland oil spills in U.S. history (the largest was the 1991 spill near Grand Rapids, Minnesota). The pipeline carries diluted bitumen (dilbit), a heavy crude oil from Canada's Athabasca oil sands to the United States. Following the spill, the volatile hydrocarbon diluents evaporated, leaving the heavier bitumen to sink in the water column. Thirty-five miles of the Kalamazoo River were closed for clean-up until June 2012, when portions of the river were re-opened. On March 14, 2013, the Environmental Protection Agency (EPA) ordered Enbridge to return to dredge portions of the river to remove submerged oil and oil-contaminated sediment.

On Sunday, July 25, 2010, at about 5:58 p.m. EDT, a 40-foot pipe segment in Line 6B, located approximately 0.6 miles downstream of the Marshall, Michigan pump station, ruptured.[4] The rupture in the Enbridge Pipeline System|Enbridge Energy pipeline caused a spill of diluted bitumen or heavy crude oil originating from Canada (Alberta and Saskatchewan) into Talmadge Creek in Calhoun County, Michigan, which flows into the Kalamazoo River. The EPA later estimated the spill to be in excess of 1 million US gallons.[5] On 29 July 2010, the Calhoun County Health Department asked 30 to 50 households to evacuate, and twice as many were advised not to drink their water.[6]

Though alarms sounded in Enbridge's Edmonton headquarters at the time of the rupture, it was eighteen hours before a Michigan utilities employee reported oil spilling and the pipeline company learned of the spill. Meanwhile, pipeline operators had thought the alarms were possibly caused by a bubble in the pipeline and, while for some time it was shut down, they also increased pressure for periods of hours to try to clear the possible blockage, spilling more oil.[7]

The oil was contained to a 25-mile stretch of the Kalamazoo River as several hundred workers took part in the cleanup.[8] Regional EPA Director Susan Hedman estimated that it would take weeks to remove the bulk of the oil from the river, several months to clear oil from the flood plains, and several more months to clean the oil out of the marsh where the spill originated. However, a year later, a 35-mile stretch of the river remained closed.[9] Originally estimated at US$5 million,[10] by September 2011, cleanup costs passed $585 million and were expected to rise by 20 percent.[9] The cleanup expense by summer 2012 had totalled $765 million.[7] By November 2014, the total had risen to $1.21 billion, with an estimated $219 million in costs yet to be paid.[11]

In June, 2012, authorities reopened most of the 35 miles of the river that had been closed to recreation after the spill. Part of the river at the Morrow Lake delta remained closed and other sections of the river remain restricted because of the ongoing cleanup of the tar sands oil product called diluted bitumen (dilbit) oil the pipeline had been transporting.[12]

One of the reasons for the vast escalation in time and expense of cleanup was that the EPA had never handled a dilbit spill. In addition, it is reported that Enbridge never informed the EPA of the product distinction. Dilbit, like all crude oil, floats in water but, over time, will sink, complicating cleanup efforts, particularly if dredging is considered too ecologically damaging.[7] Other environmental factors will affect the rate at which this process takes place. This disaster was the largest on-land spill in American history to date.[13]

In July 2016, Enbridge agreed to pay $177 million in penalties and improved safety measures in a settlement with the U.S. Justice Department and the Environmental Protection Agency.[14]

In July 2012, the National Transportation Safety Board, the U.S. federal agency with regulatory authority over the failed pipeline, issued a report representing the official conclusion of the investigation into the incident. The investigators found that the operating firm, which had received an automated signal from the pipeline that a breach had occurred, misunderstood or did not believe the signal and attempted to continue to pump dilbit oil through the pipeline for 17 hours after the breach. Local firefighters were notified, and tried to locate the southern Michigan wetland site of the breach, but were initially unable to do so, further delaying the shutdown of the line.[15]

The NTSB investigation synopsis pointed to corrosion fatigue as the underlying cause of the catastrophic breach. The incident was exacerbated by the pipeline's disbonded polyethylene tape coating. In July 2012, the cost of the cleanup operations was estimated at $767 million.[15] The NTSB stated the Enbridge dilbit oil spill is, as of 2012, the costliest onshore cleanup in U.S. history.[16] NTSB Chair Deborah Hersman likened "Enbridge's poor handling" of the spill to the Keystone Kops, asking: "Why didn't they recognize what was happening, and what took so long?" NPR reported that "NTSB investigators determined that the 6-foot gash in the pipe was caused by a flaw in the outside lining which allowed the pipe to crack and corrode. Now, in 2005, Enbridge actually had learned that this section of pipe was cracked and corroding. ... That same 2005 internal report pointed to 15,000 defects in the 40-year-old pipeline. And Enbridge decided not to dig up this Talmadge Creek area to inspect it."[17]

In 2013, in opining on the Keystone XL pipeline proposal, the EPA recommended to the State Department that pipelines that carry tar sands oil should no longer be treated just like pipelines that carry any other oil. Stephen Hamilton, an ecology professor at Michigan State University and the independent science adviser at Talmadge Creek, detailed the challenges and expense of the still-ongoing Michigan cleanup.[18][19]

The EPA issued an Order for Removal in 2013 which required Enbridge to remove oil-contaminated sediment from specific locations along the Kalamazoo River, including the three areas where submerged oil was most pronounced:

Following the Kalamazoo River oil spill, Enbridge fully replaced Line 6B at a cost of $2.63 billion, with the new pipeline placed in service in October 2014.[22][23] The replacement doubled the operating capacity of Line 6B to 500,000 barrels per day.[24] Note Line 6B is now known as Enbridge Line 78 Oil Pipeline. 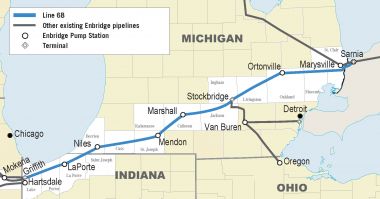 Wikipedia also has an article on Kalamazoo River oil spill. This article may use content from the Wikipedia article under the terms of the GFDL.

Retrieved from "https://www.gem.wiki/w/index.php?title=Enbridge_Line_6_Oil_Pipeline&oldid=291510"
Categories:
This page was last edited on 24 March 2022, at 22:40.
Content is available under Creative Commons Attribution-NonCommercial-ShareAlike unless otherwise noted.
Privacy policy
About Global Energy Monitor
Disclaimers