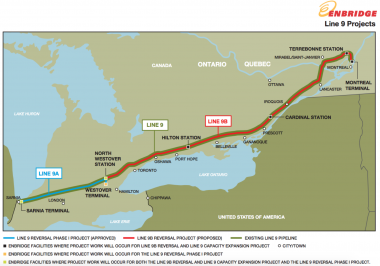 In July 2012, the National Energy Board approved Enbridge's application to reverse the direction of the pipeline flow in the section of the pipeline known as 9A, which runs from Sarnia, Ontario to North Westover, Ontario.[1] Project work related to the 9A reversal was completed in November 2013.[1]

In November 2012, Enbridge filed an application pertaining to the section known as 9B, which runs from Montreal, Quebec to North Westover Station, to increase its capacity from 240,000 barrels per day to 300,000 barrels per day, reverse the direction of the pipeline flow, and allow for the transportation of heavy crude.[1][4]

In March 2014, the National Energy Board approved the reversal and capacity expansion of Line 9B, subject to 30 conditions. [1][4]

In December 2015, Enbridge completed the reversal of the flow in Line 9B, resulting in the entire Line 9 now flowing west to east.[5]

In February 2014, CTV W5 found that Line 9 had a total of 35 spills, significantly more than the seven spills the National Energy Board said it was aware of and the 13 that Enbridge had claimed was the total.[6]

The Line 9B expansion and reversal project garnered significant opposition by environmental organizations and Tribes. In Enbridge's application before the National Energy Board, 45 intervening parties filed written evidence, 40 provided oral final argument, and 11 provided written final argument, many of which expressed concerns regarding pipeline safety and integrity and environmental impacts of potential spills.[4] 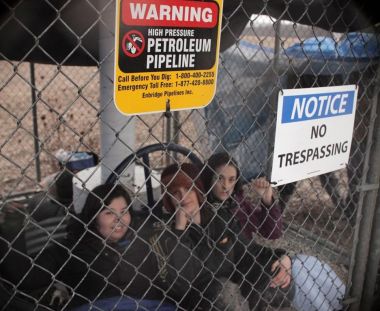 The project has resulted in numerous protests, including in Toronto, Montreal, and Cambridge.[3][7] Anti-pipeline activists have also broken into Enbridge facilities on multiple occasions, resulting in the pipeline being temporarily shut down at least four times.[8][9]

In July 2017, Canada's Supreme Court rejected a challenge to the Line 9 expansion and reversal project, determining its consultation with the Chippewas of the Thames First Nation was "manifestly adequate."[10]

Retrieved from "https://www.gem.wiki/w/index.php?title=Enbridge_Line_9_Oil_Pipeline&oldid=230629"
Categories:
This page was last edited on 29 April 2021, at 20:39.
Content is available under Creative Commons Attribution-NonCommercial-ShareAlike unless otherwise noted.
Privacy policy
About Global Energy Monitor
Disclaimers