Ffos-y-fran coal mine is an opencast mine located in the district of Merthyr Tydfil in South Wales, United Kingdom. The official name of this project is the Ffos-y-fran Reclamation Scheme, a joint development by Miller Argent (South Wales) Ltd., a jointly owned company between The Miller Group, Ltd., Argent Group PLC and Bernard J. Llewellyn JP. The development of the Ffos-y-fran coal mine is the last stage of the East Merthyr Reclamation scheme, an initiative begun in the mid-1980s to extract coal from the East Merthyr area, with goals of economic revival and reclamation of the landscape. 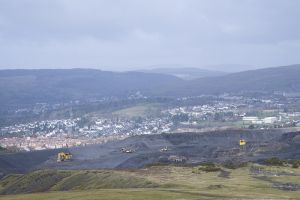 Miller Argent will excavate 1000 acres of land to a depth of 180 meters (600 ft) in order to begin mining coal.[1] The mine is expected to provide 10 million tonnes of coal over 15 years, which will result in 30 million tonnes of carbon dioxide emissions.[2]

As one of Europe's largest opencast mines, the Ffos-y-fran mine has been the subject of widespread criticism and has been the site of a number of protests. More than 10,000 people signed a petition opposing the mine, which will include a 100 meter deep pit as close as 35 meters from some local homes.[3]Elsewhere in the UK, coal mines are required to have a 500 meter buffer zone between the mine and local residents, however such legislation has not been passed in Wales. 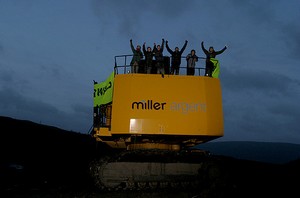 Activists occupy construction machinery at the Ffos-y-Fran coal mine construction site in South Wales on April 1, 2008.

On April 1, 2008, as part of the Fossil Fools International Day of Action, dozens of local residents and activists from a variety of environmental groups occupied the Ffos-y-fran coal mine construction site in South Wales. Protestors arrived at 6 am, scaled a coal washery and dropped a 100-foot banner, took over construction machinery, and locked themselves to the front gate, shutting down major work at the site for the day. Police made two arrests, and the other activists left without incident.[4][5]

Retrieved from "https://www.gem.wiki/w/index.php?title=Ffos-y-fran_coal_mine&oldid=231395"
Categories:
This page was last edited on 30 April 2021, at 10:46.
Content is available under Creative Commons Attribution-NonCommercial-ShareAlike unless otherwise noted.
Privacy policy
About Global Energy Monitor
Disclaimers