In 2018, the state Public Regulation Commission accepted a Public Service Company (PNM) of New Mexico three-year plan that called for shuttering two coal-fired power plants in the northwestern part of the state and more reliance on renewable energy, along with fossil gas and nuclear energy. PNM was planning to close Four Corners Power Plant by 2031.[6]

In December 2021, as noted below, regulators rejected PNM's plan to transfer its 13% share of the plant to Navajo Transitional Energy Co. (NTEC). Unable to find a buyer for its Four Corners share, PNM had agreed to pay NTEC $75 million to take PNM's share of the plant. Exiting coal generation in 2024, rather than 2031, would have eliminated 6.5 years of Four Corners coal plant costs, said PNM.[8][9] 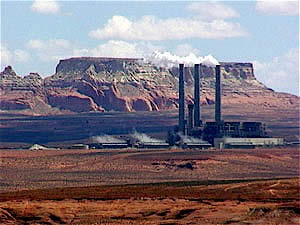 One of the largest coal-fired generating stations in the United States, Four Corners is located on Navajo land in Fruitland, New Mexico. The plant’s two active units generate 1636 megawatts of electricity and are operated by Arizona Public Service Company, which serves about 300,000 homes in New Mexico, Arizona, California, and Texas.[10] According to the American Lung Association, the following people in San Juan County are at elevated risk from power plant pollution: 2,885 people with pediatric asthma, 8,442 with adult asthma, 5,219 with COPD, 9,418 with diabetes, 6,607 with cardiovascular disease, 15,612 who are 65 and older, and 27,265 with low incomes. The ALA states that although "[d]angerous levels of air pollution can harm everyone, even healthy adults," those in high-risk categories are particularly vulnerable.[11][12] The plant utilizes scrubber technology to reduce sulfur dioxide and were installed in the 1960s.[13]

Coal combustion waste from the mines supporting the Four Corners and San Juan plants has contaminated local groundwater with sulfates, leading to the death of livestock. According to one source, 70 million tons of coal waste (containing cadmium, selenium, arsenic, and lead) has been dumped in the Navajo Mine, and combined with the San Juan mine, amounts to a total of 150 million tons.[15]

On July 5, 2007 the Sierra Club took legal action against the EPA to force the agency to "live up to their responsibility to the health and safety of local communities."[16]

On February 18, 2010, a coalition of environmental groups petitioned the U.S. Department of Interior and Department of Agriculture to declare the Four Corners plant in violation of the Clean Air Act and require reduced pollution.[17] The petitioners (including Earthjustice, the Sierra Club, the San Juan Citizens Alliance, the Center for Biological Diversity, Dooda Desert Rock, Diné CARE, WildEarth Guardians and the Grand Canyon Trust) note that the plant is the largest source of air pollution in New Mexico and is less than 200 miles from 16 national parks and wilderness areas.[18]

On November 8, 2010, Arizona Public Service announced that it had entered into an agreement to purchase Southern California Edison's share of Four Corners Steam Plant Units 4 and 5, which it plans to retrofit with additional emission controls. The company will close Units 1, 2, and 3. There will be no layoffs at the plant, which employs 549 workers, 74 percent of whom are Navajo.[19] Closing the three units will reduce the capacity of Four Corners by 633 megawatts (nameplate capacity) or 560 megawatts (net summer capacity). Units 1 and 2 were built in 1963, and Unit 3 was built in 1964.

On March 30, 2010, Southern California Edison (SCE) informed Arizona Public Service (APS) of the company's intentions to divest its 48 percent stake of Four Corners Power Plant by 2016. According to APS, Southern California Edison announced it did not plan to sell its shares on the open market. Among the issues that may have prompted SCE to divest its interests are proposed legislative initiatives to regulate carbon from power plants, Best Available Retrofit Technology requirements for the plant by fall 2010, and the possible regulation of coal fly ash as a hazardous waste.[20]

In October 2010, the California Public Utilities Commission signaled that it would no longer allow investments at Four Corners Steam Plant after 2012, in compliance with SB 1368, the Emissions Performance Standard. The law, passed in 2006, prohibited new ownership investment in power plants that fail to meet minimum performance standard for carbon emissions. Southern California Edison owns 48% of two of the generating units at Four Corners.[21]

In November 2010 Edison International announced its intention to sell its share of the Four Corners Steam Plant to Pinnacle West Capital Corp. (PNW) unit Arizona Public Service Co. for the price of $294 million. Edison will sell its 48% stake in Units 4 and 5 of the plant, which at the time was still subject to approval from federal and state regulators in Arizona and California, Edison spokesman Gil Alexander said.[22]

In December 2021, regulators rejected Public Service Company of New Mexico's (PNM) plan to transfer its 13% share of the Four Corners coal plant to Navajo Transitional Energy Co. (NTEC), citing the utility's failure to identify or propose replacement resources for the 200 MW of power it owns. The decision by the New Mexico Public Regulation Commission (PRC) was "disconcerting," PNM said in a statement, as selling its share of the plant would have saved customers up to $300 million and helped the utility abandon coal generation almost seven years ahead of current plans. Environmental advocates cheered the decision, however. PNM's proposal could have left Four Corners operating "indefinitely," according to Sierra Club. And New Energy Economy (NEE) said the denial means PNM's investments in the plant will now face a prudence review.[8]

The proposed controls would reduce emissions of nitrogen oxides from about 45,000 tons per year to 9,000 tons per year, and improve both public health and visibility at 16 national park sites in the area, the EPA stated.[23]

In early November 2010 a federal judge voided a permit for the expansion of the operating permit for the Navajo mine located on the Navajo reservation in New Mexico. It was one of two mines at the location that has sought expansion permits. The judge called for a more thorough review of the project’s impact on the environment and on cultural sites.

BHP Billiton owns the mine, which feeds the Four Corners Generating Station, also on Navajo land in New Mexico.[24]

Retrieved from "https://www.gem.wiki/w/index.php?title=Four_Corners_Steam_Plant&oldid=284113"
Categories:
This page was last edited on 2 February 2022, at 18:06.
Content is available under Creative Commons Attribution-NonCommercial-ShareAlike unless otherwise noted.
Privacy policy
About Global Energy Monitor
Disclaimers