All of the Eastern U.S. forest acreage leased since 2011 (with the exception of 38,174 acres in Alabama’s Conecuh National Forest) lies over shale deposits. From 2011 to mid-2012, the federal government had leased or scheduled for auction more than 384,000 acres at the request of private bidders, more than 10 times as much land as it had leased in the previous two years. Private land overlying shale deposits can sell for thousands of dollars an acre; land in 2012 BLM forest leases averaged $47 per acre.[1] 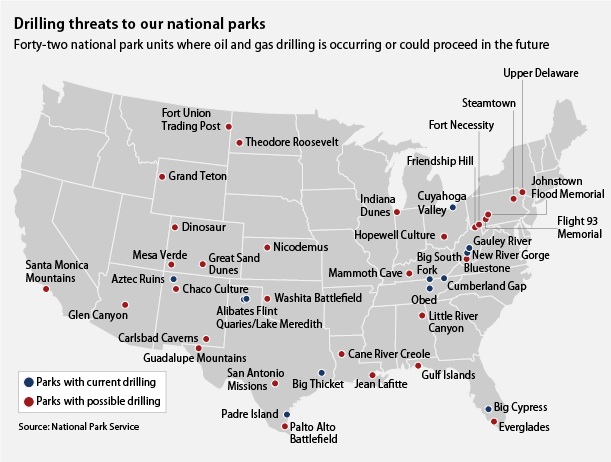 The Colorado Bureau of Land Management plans to auction off 12,000 acres of public lands for oil and gas drilling in November 2013. Most of the acres are located less than ten miles from the state park of Mesa Verde.[3]

In November 2015 the Bureau of Land Management office put up for auction 90,000 acres of mineral rights for drilling. Much of the land was within the Pawnee National Grassland. Buyers had purchased 93 percent. The average bid was less than $60 per acre. The sale made $5,021,931.[4]

Hydraulic fracturing could come to Lewisville Lake in Denton County this spring 2016. An agency within the US Department of Interior, the Bureau of Land Management (BLM), will determine whether to auction off drilling rights for 259 acres in Hickory Creek for the next 10 years. The auction is set for April 20, 2016 at the BLM offices in Santa Fe, New Mexico.[5]

Lewisville Lake provides drinking water for millions. It has a high risk dam. The Army Corps of Engineers has it listed as the nation’s eight most hazardous[6]

City councils of several cities including Lewisville and Colony are expected to submit formal letters of protest against the Lewisville Lake drilling project. [7] Denton, Flower Mound and Hickory Creek city councils are scheduled to discuss the project and potentially join the protest.[8]

Jody Puckett, director of Dallas Water Utilities, sent a formal letter of protest to the BLM. Puckett claims the project does not account for the safety of the dam.[9]

According to environmental groups, the BLM is not applying the same environmental review and public comment procedures that the Obama administration has instituted in the West. Under those procedures, BLM analyzes the site-specific environmental consequences for lease parcels several months in advance of a sale and provides its findings to the public for comment; provides maps and global positioning data for each lease parcel; and provides links to the environmental analysis supporting a sale on its Web site.

By contrast, bidders on Forest Service lands in the East don’t need to provide GPS coordinates for prospective parcels; they can describe areas by referring to local landmarks or other general terms; and a site-specific environmental analysis takes place only after leases are sold.

BLM officials say the difference lies in which federal agency is operating as the land’s surface manager: in the West, BLM, a division of the Interior Department, performs the analysis; in Eastern national forests, the Forest Service performs the task because it owns the land being leased, even though BLM officials conduct the auctions.[10]

A Boom With No Boundaries: How Drilling Threatens Theodore Roosevelt National Park

On May 4, 2012 the Obama administration announced proposed federal rules that will require companies to disclose the chemicals used during their fracking process after they finish operations. The rules will also strengthen well-bore integrity and address issues related to flowback water. The regulations would only account for the natural gas and oil deposits located on BLM land, which is considered a "sliver" of total lands where fracking occurs.[11][12][13] The rules would allow limited exemptions on chemical disclosure for “legitimate trade secrets.”[14]

In January 2013, the Interior Department restarted the process, announcing it was drafting a new proposal. The new language incorporated several industry requests, including: exempting acidizing, a process similar to fracturing that is used in California's Monterey Shale; making it easier to withhold fracturing fluid ingredients as trade secrets; and adopting the industry-backed FracFocus website for disclosure of chemicals. According to an EnergyWire review of White House visitor records, President Obama's top energy adviser Heather Zichal met more than 20 times in 2012 with industry groups and company executives lobbying on the proposed BLM rule, including the American Petroleum Institute (API), BP, Devon Energy, and ExxonMobil.[15]

In May 2013 the BLM published new draft rules weaker than those proposed in 2012. According to the NRDC:[16]

The temporary use of open waste pits will be prohibited except in rare circumstances.

Drillers will need to perform mechanical integrity pressure tests, will be required before hydraulic fracturing can be done.

A geological analysis will be required before hydraulic fracturing so new fractures to lower their potential to intersect with water sources or water wells.

The Natural Resources Defense Council stated that the new rules do not go far enough to protect the environment.[17]

In April 2012, the Southern Environmental Law Center (SELC) and other groups contested a planned June 2012 lease sale involving more than 43,000 acres (totaling 36 parcels) of national forestland in Alabama, saying the Bureau of Land Management failed to properly evaluate the potential impacts of hydraulic fracturing to sensitive wildlife and water quality. The lease would cover 42,965 acres of industry-nominated parcels in the Talladega National Forest in east-central Alabama, and 73 acres in Conecuh National Forest in south Alabama.[18]

SELC argued in its complaint that the lease of these parcels for oil and gas development would violate multiple federal laws, including the National Environmental Policy Act, and that drilling would result in significant impacts to the federally threatened wildlife, as well as to various waterways. Specifically, the SELC states that BLM's decision to authorize the lease sale is incorrectly based on environmental studies and analysis that the Forest Service used in 2004 to revise the Land and Resource Management Plan for Alabama's national forests, saying those studies are out of date and do not evaluate the potential impacts of hydraulic fracturing. SELC wants BLM to withdraw the 36 Alabama national forest parcels until an in-depth environmental impact statement is conducted.[18]

The Alabama lease parcels are part of a much broader multistate oil and gas lease sale planned for June 14 covering more than 92,000 acres of federal land in Alabama, Arkansas, Louisiana and Mississippi. The SELC protest involves only the 36 parcels in the Talladega and Conecuh national forests in Alabama. Industry interest in the region appears to be on shale gas in the Black Warrior Shale Basin beneath Talladega National Forest. The Energy Information Administration has identified a number of active and potential areas in the area for shale drilling, which typically involves fracking.[18]

BLM spokesperson Davida Carnahan said the lease sale is still scheduled to take place and that a decision on the protest letter likely won't be made until after the sale.[18]

In 2011, officials at Virginia’s George Washington Forest proposed banning any future horizontal drilling in the forest.[19] The move has stirred oil and gas companies to try to block or modify the proposed ban. A final plan is expected to be released by November 2013.[20]

No other national forest has drilling restrictions, and most do not control the mineral rights to what lies in the ground; those are mostly left to private lease buyers.[20]

According to the December 2013 report by the Center for American Progress, public lands contribute 4.5 times more carbon pollution than they are able to absorb: "Based on an analysis of publicly available ecosystem carbon-sequestration data accessed from the U.S. Geological Survey, or USGS, public lands in the continental United States absorb 259 million metric tons of carbon dioxide equivalent, or MMTCO2e, every year. Meanwhile, 1,154 MMTCO2e are emitted each year from the combustion of coal, oil, and natural gas extracted from onshore public lands in the continental United States."[21]

According to the 2103 EIA report, "Sales of Fossil Fuels Produced from Federal and Indian Lands, FY 2003 through FY 2012," federal lands contributed to 42.1 percent of US coal (442 million short tons), 26.2 percent of US oil (596 million barrels), and 17.8 percent of our natural gas (4,262 billion cubic feet). Climate Progress estimates that, using the Environmental Protection Agency’s “Greenhouse Gas Equivalencies Calculator,” the 2012 public lands development is equivalent to the emissions from 427 coal-fired power plants. (For comparison, there are 589 coal-fired power plants in the U.S.)

A 2013 USGS study found that construction of new roads and pipelines for Marcellus Shale natural gas development and other energy industries can end up sub-dividing local forests, leading to smaller ecosystems and limiting wildlife.[22]

The 2013 US GAO report "BLM Needs Better Data to Track Permit Processing Times and Prioritize Inspections" faulted the Bureau of Land Management for not including information about the environmental inspection history of many wells in its central database for tracking oil and gas facilities on public lands. As a result, the report said the inspection prioritization process “does not have sufficient information to ensure that wells receiving inspections are those that pose the greatest environmental risk.”

For state-by-state information on fracking, click on the map below.

Retrieved from "https://www.gem.wiki/w/index.php?title=Fracking_and_public_lands&oldid=135147"
Categories:
This page was last edited on 25 December 2019, at 21:48.
Content is available under Creative Commons Attribution-NonCommercial-ShareAlike unless otherwise noted.
Privacy policy
About Global Energy Monitor
Disclaimers