The undated satellite photo below shows the plant's site, which is near Yaykıl village, Gerze district, Sinop province.

This two-unit, 1,200-MW coal-fired power plant was proposed by the Anadolu Group.[1] The project received initial permits in November 2008.[2]

The plant proposed for the Black Sea coast was the center of repeated protest. In March 2010, residents of village of Yaylik prevented a public meeting organized by plant's sponsor, the Anadolu Group, forcing workers to leave their village. The villagers subsequently posted a guard to prevent drilling teams from working in the village. In September 2011, three buses of gendarmerie officers used tear gas and truncheons against the protesting villagers, injuring four people and igniting a nearby forest. Comert Uygar Erdem, a lawyer representing the residents, said that the company lacked a license from the Ministry of Environment, that the Assessment of Environmental Impact had not been completed, and that the project was proceeding due solely to the governor's permission. Erdem asserted out that due to Roman and early Byzantine archeological findings the plant location should be declared a historically protected area.[3]

In November 2011 ten thousand people from various provinces and districts of Turkey gathered in the town of Gerze to protest the construction of the plant. The demonstration was organized by the Platform for a Green Gerze (YEGEP) and attended by members of the Green Party, the Ecology Collective, Greenpeace and others. The demonstration was carried out and brought to an end peacefully. The protestors chanted slogans like "Gerze does not want coal" and "The people of Gerze do not stand alone".Additionally, Greenpeace launched an internet signature campaign in 2011 against the coal-run thermal power plant, which gathered over 37,000 supporters.[4]

In August 2013 the Ministry of Environment and Urbanization rejected the Environmental Impact Assesment report for the plant for the fourth time, saying the proposed plant was within a forest area and that the proposal should be redrafted to stay outside forest areas. Environmental groups said the area is covered in forest, which would make a new proposal infeasible.[5] 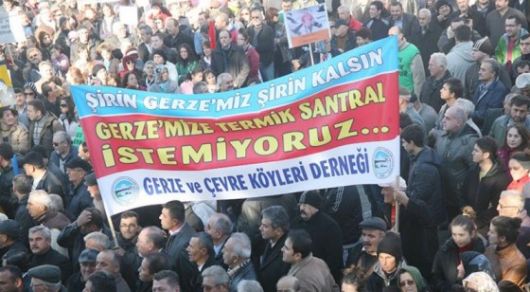 "Let our lovely Gerze stay lovely. We don't want a thermal power plant to come to our Gerze..."

Gerze mayor Osman Belovacikli supported the resistance against the plant, and said he has taken an initiative to bring wind energy technology to Gerze.[6]

Retrieved from "https://www.gem.wiki/w/index.php?title=Gerze_power_station&oldid=231732"
Categories:
This page was last edited on 30 April 2021, at 10:46.
Content is available under Creative Commons Attribution-NonCommercial-ShareAlike unless otherwise noted.
Privacy policy
About Global Energy Monitor
Disclaimers