The map below shows the location where the plant is proposed to be built in the southeast corner of the proposed JIIPE industrial estate north of the industrial city of Gresik, in East Java Province. 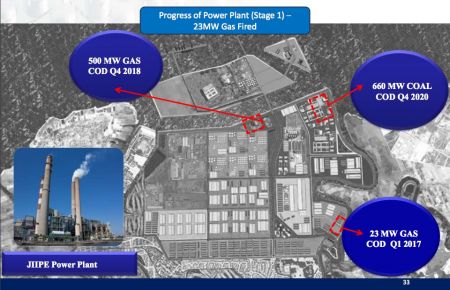 Map of planned JIIPE industrial estate north of Gresik, showing proposed coal plant. The map is oriented with East on the top and West side on the bottom

In November 2014, AKR Corporation announced plans to build a two-unit, 600-MW coal-fired power plant in the Java Integrated Industrial Port Estate (JIIPE) in Gresik, Indonesia. The plant would use German components, and would cost $1.5 billion.[1]

The company was reviewing funding sources and considering the possibility of building the plant as a joint venture. Land acquisition was also being negotiated. The company hoped to move forward with the project with an investor in place in early 2015.[2]

As of December 2018 there has been no additional news about this project and it appears to have been cancelled.

Retrieved from "https://www.gem.wiki/w/index.php?title=Gresik_AKR_power_station&oldid=231902"
Categories:
This page was last edited on 30 April 2021, at 10:46.
Content is available under Creative Commons Attribution-NonCommercial-ShareAlike unless otherwise noted.
Privacy policy
About Global Energy Monitor
Disclaimers