The proposal is different from the Amasra Bartın power station.

The undated satellite photo below shows the plant's site, which is near Gömü village, Amasra district, Bartın province. The second phase of the plant would be built to the north of this site.

The power station has been proposed by Hema Elektrik, a subsidiary of the Turkish Hattat Holding. The plant would be built near Amasra in the Bartin province of northern Turkey, on a site less than a mile from the shore of the Black Sea. The plant is planned to be a mine-to-mouth plant, with coal coming from Hema's proposed Amasra Hardcoal Project (which holds an estimated 573 million tons of reserves).[1][2]

After telling local residents in 2005 that it planned only to build a new coal mine in the area, and not a coal power plant, Hema applied in 2006 to Turkey's Energy Market Regulatory Agency (EPDK) to build a 654-MW coal-fired plant in Amasra. The company then increased that permit to 2,640 MW in 2009.[3] Over the years the size of the proposed plant varied significantly. While in January 2010 Hema's website stated that it would be 1,100 megawatts,[4] in March 2012 the company's website referred to it as a 2,640 MW plant.[5] While the company's website refers to the current proposal as being 1,320 MW, at an agreement signing ceremony for the plant Turkish energy minister Taner Yildiz flagged that the project could increase to 4,000 megawatts in capacity.[6]

The EIA hearing for the proposed 1320 MW integrated power station was held in September 2013. The power station has been opposed by local residents, who challenged its permitting.[7] The Turkish Ministry of Environment and Natural Resources rejected the plant's environmental impact assessment, in an apparent victory for opponents of the plant. Hema has stated that it will continue to pursue the project.[8][9] In April 2014, the plant's environmental permitting process was apparently still underway.[10]

According to CAN Europe, licenses are being pursued for the HEMA Amasra power station and 1,200 MW Amasra Bartın power station (which was shelved in 2017). In January 2016, an Engineering, Procurement and Construction contract (EPC) for the HEMA Amasra plant was signed between Hema Elektrik Üretim Anonim Sirketi and Dongfang Electric Corporation of China. The contract price is a lump sum of US$900 million.[12]

In 2016, more than 2000 residents were joined by local NGOs to file a court case against a positive EIA decision for the plant. Following that, the project's environmental plan was revised to make it look suitable for a coal power plant. Local groups and some NGOs communicated their objections to this development, and if the objections are ignored they'll file another court case against this development.[13]

In August 2016, Hattat Holding’s chairman, Mehmet Hattat, issued a press release stating that, because of the extensive opposition on the ground, the project’s EIA process was taking too long and that the promoters were finding it difficult to attract international finance. According to locals, in February 2017 Credit Suisse was approached by the company for financing for the coal mine, and a Turkish consultancy firm, 2U1K, conducted a survey and interviewed local communities on behalf of the Swiss bank.[12]

As of June 2021, the most recent EIA process for the plant has been cancelled,[14] and allocation of land for the plant's construction has been revoked.[15]

In November 2021 the plant's EIA was cancelled by the Council of State 6th chamber, and the plant is cancelled.[16] 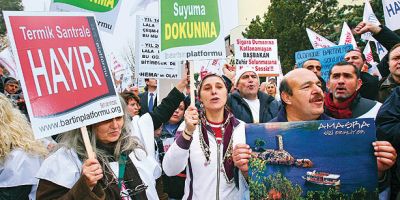 Residents of Bartın protest against the proposed Amasra Bartın power station in 2010.[3]

The proposal to build the plant has faced significant opposition, both in Amasra and in the provincial capital of Bartın, on the grounds that pollution from the plant would hurt tourism and damage the local environment. Protests have been led by the Bartın Platform, created in April 2010, which united various regional stakeholders opposed to the plant. 10,000 residents of Bartın held a protest against the plant in April 2010. Later that year a petition against the plant collected 30,000 signatures. Moreover, public permitting meetings have been disrupted by local residents.[3][17]

Hasan Cengiz, chairman of the Amasra Association for Culture and Tourism, noted in 2012 that the plant was trying to break people’s resistance by offering town residents employment in its mines and natural gas plants in the region.[3]

In 2017 Hattat Holding submitted a separate EIA for the preparation facility, despite the decision of the 14th Chamber of the Council of State that it should be included in the Environmental Impact Assessment (EIA) for the power plant. Bartin Platform claimed consideration of this separate EIA would be unconstitutional.[19]

A court case by the Bartin Platform requesting the EIA to be cancelled lasted a year and a half but was rejected in May 2018 by the Zonguldak Administrative Court.[20]

In February 2019 the Supreme Administrative Court found that the plant's EIA was "not in conformity with the law" because it failed to fully assess the project’s environmental impacts.[21] "This decision showed that the EIA process was illegal and that our claim was correct," said Erdoğan Atmış of Bartin Platform.[22]

In May 2019 the EIA permit process was restarted with a public participation meeting scheduled for May 10, 2019.[23] The meeting was postponed due to continued public opposition to the plant.[24] However, this EIA permit process was canceled in 2021 by an Investigation and Evaluation Commission (IDK) set up by the Ministry of Environment and Urbanization. The decision to cancel the process came after a commission meeting with the participation of the Bartin Platform.[14]

In September 2019, a hearing was conducted in Ankara Administrative Court as a follow up of the legal case issued in 2006 against the generation license of the plant.[25]

In December 2019, 98 mine workers striked because they had not been paid for two months. Head of the Amasra branch of Mine Workers Union (Genel Maden İşçileri Sendikası) called Turkish Hard Coal Enterprises to cancel the royalty agreement of HEMA.[26][27]

In June 2020, the 6th Chamber of the Council of State nullified the Ministry of Environment and Urbanization's 2016 environmental plan that had legalized the construction of a plant as a result of legal action taken by the Bartin Platform. The Council emphasized that 90% of the land allocated to the plant's construction in the plan was forest land.[15] From 2010 to 2021, locals prevented eight attempts to hold an environmental impact assessment (EIA) meeting with the participation of the people.

Retrieved from "https://www.gem.wiki/w/index.php?title=HEMA_Amasra_power_station&oldid=281680"
Categories:
This page was last edited on 14 January 2022, at 17:48.
Content is available under Creative Commons Attribution-NonCommercial-ShareAlike unless otherwise noted.
Privacy policy
About Global Energy Monitor
Disclaimers