Horizon Crude Oil Pipeline is an oil pipeline in Canada that transports crude oil extracted from the oil sands to Edmonton delivery points.[1] Pembina provides transportation services via the Horizon Pipeline exclusively for Canadian Natural Resources Ltd.'s Horizon Oil Sands operation in Alberta under a 25-year contract, which expires in 2034.[1][2]

The pipeline originates in Fort McMurray, Alberta, and terminates in Edmonton, Alberta. 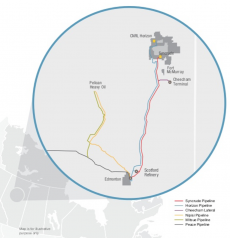 The Horizon pipeline was initially built over three construction phases beginning in November 2006 and completed in 2008 at a cost initially estimated at CAN$290 million, and later $338 million.[3][4] The pipeline was substantially completed at a cost of CAN$400 million in July 2008.[5]

In June 2015, Pembina announced a $125-million expansion of the pipeline to increase its capacity to 250,000 barrels per day by making upgrades to mainline pump stations and other facilities.[2]

Retrieved from "https://www.gem.wiki/w/index.php?title=Horizon_Crude_Oil_Pipeline&oldid=232477"
Categories:
This page was last edited on 30 April 2021, at 10:47.
Content is available under Creative Commons Attribution-NonCommercial-ShareAlike unless otherwise noted.
Privacy policy
About Global Energy Monitor
Disclaimers