Kirkuk-Ceyhan Oil Pipeline, also known as the Iraq–Turkey Crude Pipeline, is an oil pipeline in Iraq and Turkey.[1]

The pipeline runs from Kirkuk, Iraq, to Ceyhan, Turkey.

In 1973, the Iraq-Turkey Pipeline Agreement was signed, followed by an amendment in 2010; the agreement stipulates that oil extracted in Kirkuk would be shipped to international markets via the pipeline through Turkey. The first pipeline was completed in 1976 and measured 986 kilometers. The second parallel pipeline was started in 1985 and finished in 1987. The pipeline had a capacity of 1.4 million bpd.[4][5] The pipeline made Iraq Turkey's largest supplier of oil while providing an imperative alternate route to export its oil. It was even the largest pipeline system in the Middle East at one point.[6]

Since 1990, a combination of wars, sabotage, and economic sanctions have deteriorated the pipeline's capacity on the Iraqi side. One of the parallel lines has even been completely inoperable since 1990. [7] In 1991, Turkey shut down the pipelines due to UN sanctions which were placed on Iraq after Saddam Hussein's invasion of Kuwait. The pipeline reopened in 1996, but its capacity was severely reduced due to the destruction of an Iraqi pumping station north of Baiji during the Gulf War.[6] The no-fly zone implemented by coalition forces even after the Gulf War resulted in further damage to the Iraq-Turkey pipeline throughout the 90's.[8] While the pipeline remained functioning from 1996 to 2003, albeit at a much lower capacity than was intended, the aftermath of the 2003 invasion by the United States ultimately made the pipeline inoperable on the Iraqi side of the border for a significant periods of time.[6]

From 2003 to 2008, militants reportedly attacked or sabotaged the pipeline over 20 times, severely limiting its export capacity.[9] In 2014, the pipeline was again attacked and damaged after the so-called Islamic State took over large swaths of northern Iraq, closing the pipeline on the Iraq side of the border.[10]

In September of 2010, an agreement was signed extending the pipeline operations under current conditions until 2025.[11]

Pipeline Incidents on Iraq Side

June 12 — attack along the 600 mile (960 km) pipeline that carries crude oil from Iraq's northern fields near Kirkuk to Turkey's port of Ceyhan on the Mediterranean Sea.[9]

September 18 - attack on pipeline from Kirkuk to Ceyhan.[9]

May 26 - explosion on Kirkuk-Ceyhan pipeline near Kirkuk.[9]

June 6 - attack on Kirkuk-Ceyhan pipeline. Iraq's Northern Oil Company (NOC) chief Ghazi Talabani said "Assailants detonated sound grenades on the pipeline Sunday at dawn (local time), 120 km (75 miles) east of Kirkuk, causing damage, and a loss of a huge quantity of oil." He said "The oil loss has been stopped and a group of technical experts are repairing the pipeline and the damage could be repaired by Tuesday night. Restarting production depends on the decision of the coalition and the oil ministry."[9]

July 15 - explosion near Fatha, some 55 miles (90 km) west Kirkuk, on an oil pipeline that runs from the major oil fields in Kirkuk and the Turkish port Ceyhan. The resulting fire has been extinguished and repairs on the pipeline are expected to begin July 17.[9]

August 3 - explosion about 75 miles (120 km) west of Kirkuk at Al-Fateha on critical pipeline juncture caused a huge fire and road closure between the Beiji refineries and Kirkuk and halted exports through the northern pipeline to Ceyhan.[9]

September 1 - explosion on Kirkuk-Ceyhan oil pipeline on section between Kirkuk and Bayji at 6:30 pm near Riyadah 30 miles (50 km) south of Kirkuk sparked a huge fire halting exports on the line.[9]

September 6 - a day after the fire on the Kirkuk-Ceyhan pipeline was extinguished, attackers set fire to the leaking oil and re-ignited it.[9]

September 14 - blast on junction where pipelines cross the Tigris River, at point near the 676-MW Beiji power plant set ablaze three oil pipelines, stopping the flow of oil from the Kirkuk oilfields to Beiji refinery and to Ceyhan. The heat melted a 400-KV transmission line that ran almost 300 ft above the area, causing a power loss of 750 MW within a second, which caused the country's 5,000 MW grid to short circuit stopping electricity supply to all of Iraq. Just two days prior Northern Oil Company engineers finished replacing critical valves destroyed by an earlier attack.[9]

June 25 - attack on oil pipleline leading from Kirkuk to Ceyhan.[9]

Sept 3 - an explosion on oil pipeline 2.5 miles from Fatha, between Kirkuk and Bayji, stopping oil flow from Kirkuk to Ceyhan after insurgents ignited an oil leak[9]

January 25 - a bomb exploded under a pipeline linking an oilfield near Kirkuk with the terminal at Ceyhan, causing a fire and a partial reduction in pumping.[9]

February 2 - attack on oil pumping station feeding one of two export pipelines from Kirkuk to Ceyhan.[9]

July 31 - Iraq’s northern pipeline carrying crude from the northern oilfields to Turkey's Ceyhan port was sabotaged and ruptured, delaying the restart of export from a previous attack on 9 July 2006.[9]

In 2013, the Kurdish Regional Government (KRG) built a new pipeline to feed crude oil from fields in Kirkuk to Ceyhan. The new pipeline was built along a different route which effectively bypassed portions of the now defunct original pipeline controlled by the Iraqi State.[12] Since portions of the original line ran outside of the KRG's terriotry as well as the control of the Iraqi Cenral government's, the pipeline's defense from the Islamic state became far too onerous and made repairs nearly impossible.[13] But the new pipeline would create new tensions between the KRG and the Iraqi government in Baghdad.

The new pipeline has generated more economic independence for Iraqi Kurdistan, while the vital oil-rirch area of Kirkuk has remained under full control of the KRG since 2011.[12] Unlike the central government in Baghdad, the Iraqi Kurds' Peshmerga military forces were able to successfully halt the Islamic State's advance upon its territory, allowing the KRG to further consolidate its regional, political, and increasingly economic autonomy from the Iraqi state.[13] 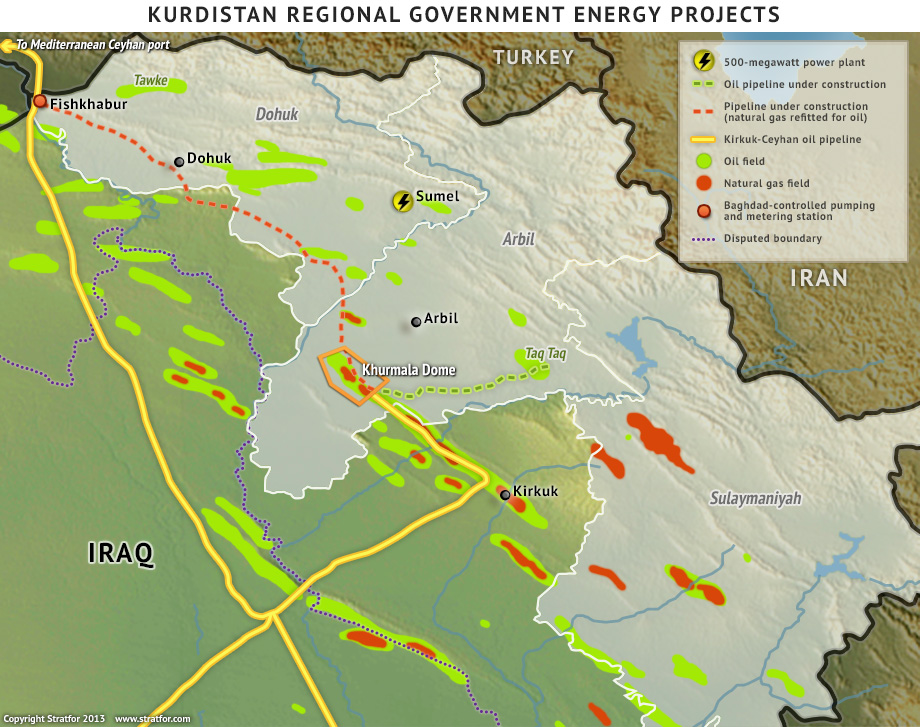 Retrieved from "https://www.gem.wiki/w/index.php?title=Kirkuk-Ceyhan_Oil_Pipeline&oldid=233705"
Categories:
This page was last edited on 30 April 2021, at 10:48.
Content is available under Creative Commons Attribution-NonCommercial-ShareAlike unless otherwise noted.
Privacy policy
About Global Energy Monitor
Disclaimers