The project was to include coal-handling facilities at the proposed Lamu Port.

The map and satellite photo below show the proposed construction location for the plant in Manda Bay. The power station would be located on 975 acres in the Kwasasi area, about 21 kilometers north of the town of Lamu in Lamu County, along Kenya's Indian Ocean coast.[1] This is approximately 250 kilometers, by air, north-east of Mombasa.[2] The driving distance is approximately 300 km.[3]

In 2013, the Kenyan government released an "Expression of Interest" meant to target investors for the proposed Lamu Power Project. The plant would rely on imported coal from South Africa and Zimbabwe. The Kenyan government also stated that it was willing to move the project from Lamu County to Kitui County where large deposits of coal were recently discovered.[4]

In September 2014, it was reported that the plant would be constructed in Lamu County by a company known as Amu Power, a consortium of Kenyan companies Centum Investment Group and Gulf Energy Ltd., as well as Chinese companies China Huadian, Sichuan Electric Power Design and Consulting Company, and Sichuan No 3 Power Construction Company.[5] According to Amu Power, the plant will be 1,050 MW, and include coal-handling facilities at the proposed Lamu Port, including a jetty and associated infrastructure.[6] The proposed power plant will initially produce power using coal sourced from South Africa and later on switch to local coal mined from Kitui County's Mui Basin.[7]

Two of the losing bidders challenged the award in court. An arbitration tribunal, however, upheld the award in January 2015.[8][9] Construction was pushed to 2015 following the disputes,[7] and the planned commencement date of January 2016 will likely be pushed back.[10] Members of the Lamu County Assembly said they want 30 per cent of the profits gained from the coal power plant project to remain in the county to benefit the local population, rather than going to the national government.[11]

According to the Amu Power website (July 2015), the project was under Environmental & Social Impact Assessment (ESIA), expected to be completed in March 2015, after which it would be uploaded for public comment.[12] In July 2015, it was reported that the Lamu county government had endorsed the Amu coal plant, as long as all ESIA concerns were addressed. County representatives said they expected compensation packages for people affected by the project, and said priority in jobs accruing from the venture should be given to Lamu people.[13]

Construction of the plant was expected to start on September 30, 2015, and take 21 months to produce electricity.[14] However, on September 14, 2015, it was reported that construction had been delayed as Amu Power Company needed the Kenya National Land Commission (NLC) to finish a resettlement plan for the site before the company could submit an environmental impact report, which needs to be approved before construction can begin.[15]

The environment project report was submitted in September 2015, and states the plant would use supercritical technology.[16] 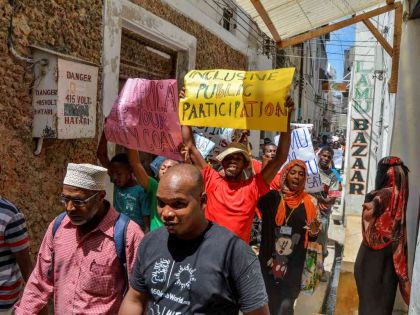 In March 2016, it was reported the environmental and social impact assessment (ESIA) for the project was still underway.[17] In May 2016, Kenya's National Land Commission (NLC) said it was acquiring 387.363 hectares to build the US$2 billion plant.[18] Amu Power has signed a power purchase agreement with Kenya Power to sell electricity generated at the plant at a cost of US7.52c/kWh.[19]

In August 2016, the Lamu County Assembly rejected an environmental and social impact assessment report by investors on the plant. The assembly wants the project owners to come up with a resettlement plan for residents who will lose their land to the project. Over 975 acres had been set aside for the project, with 600 land owners expected to be affected.[20]

However, it was reported on September 7, 2016, the National Environmental Management Authority (Nema) issued a license to Amu Power allowing the company to start building the coal power plant.[21]

An objection to the plant's approval by the group Lamu Natural Justice was heard by the Energy Regulatory Commission (ERC) in December 2016. In February 2017 the ERC over-rode the objection and approved the construction of the plant.[22] According to the NGO Save Lamu, the ERC decision did not mean a license to build the project had been granted; rather, ERC was still deliberating and a decision had yet to be made on the granting of the electricity generation license.[23]

In June 2018, it was reported that the Kenya Energy Regulatory Commission (ERC) instructed developers of the proposed 1,050 MW coal plant to scale it down, reportedly to avoid excess electricity that would force consumers to pay for idle plants. The energy regulator directed cuts in the phased capacity from three phases of 350 megawatts to three phases of 150-200 MW.[24] However, one day later, the Kenya ERC issued a press release on its Twitter account saying there had been no change in the proposed capacity.[25]

In July 2017, Save Lamu petitioned the Environment & Land Court of Kenya to determine whether or not the Energy Regulatory Commission has granted an Electricity Generation Licence to Amu Power to build the proposed 1,050 MW coal plant and to make full disclosure of the Power Purchase Agreement (PPA) into which it entered.[26]

In May 2018, it was reported that General Electric (GE) was set to acquire a stake in Amu Power in exchange for supplying ultra-supercritical units and pollution controls for the Lamu project.[27]

In August 2018, 56 institutional and individual investors with US$713 billion (Sh71.3 trillion) in assets under management asked US firm General Electric to withdraw an earlier decision to invest in the plant. GE was to purchase a Sh40 billion stake in Amu Power as well as manage the plant and provide new steam turbines and boilers.[28]

In October 2018, the High Court in Nairobi reinstated all automatic stay orders issued for projects challenged at the National Environmental Tribunal (NET). The ruling effectively restored stop orders issued, including the Lamu plant. The case was filed by activist Okiya Omtatah and Katiba Institute.[28]

A decision on the challenge to the ESIA of the plant was expected in June 2019.[29]

On June 26, 2019, the National Environment Tribunal (NET) cancelled the license issued by the National Environment Management Authority (NEMA) approving the environmental impact assessment for the proposed plant. The court ruled that NEMA had breached its own procedures, did not properly examine the proposed engineering systems, and failed to take account of Kenya’s Climate Change Act. The court also found there was no proper process of public participation on the project to the extent of being “contemptuous of the people of Lamu.” The NET stated that “there was a casual approach by NEMA" and that NEMA "failed to carry out their mandate as required by law.” Amu Power has 30 days in which it can file an appeal against the decision; if Amu Power decides not to appeal the decision, it will be required to undertake a fresh environmental assessment.[30]

In September 2019, Amu Power appealed the ruling that revoked the project’s license.[31]

In March 2020, the National Environment Tribunal again cancelled the license, saying it omitted engineering plans and key facts from public participation. The tribunal said if Amu Power wants to proceed with the project it will have to carry out a fresh environmental impact assessment. Amu Power said it plans to do so.[32]

In September 2020, Business Daily Africa reported that, in a further setback for the project, General Electric was expected to exit its agreement with Amu Power to design, construct and maintain the power plant as a result of the company's new plan to end its involvement in the new-build coal power market as it shifts to renewable energy.[33]

In November 2021, the fate of the plant continued to hang in the balance after recommendations in a report presented to President Uhuru Kenyatta said its power purchase agreement (PPAs) with Kenya Power had lapsed.[34] With no apparent update on the project's status as of May 2022, the project could be considered shelved.

Amu Power Company is a consortium of Gulf Energy, Centum Investment Group, China Huadian, Sichuan No 3 Power Construction Company and Sichuan Electric Power Design and Consulting Company. The special purpose vehicle was expected to develop, own, and operate the station for 25 years as part of the Lamu Port and Lamu-Southern Sudan-Ethiopia Transport Corridor, which would include the proposed Lamu Port at Manda Bay, connecting railroads, oil pipelines, and a refinery.[35]

In July 2016, it was reported that Amu had contracted Chinese firm, Power Construction Corporation (PowerChina), to build the plant. PowerChina said it planned to hire 1,400 Chinese workers, constituting 40% of the plant's development workforce.[36]

In February 2015, Amu Power received US$1.2 billion (Sh1,013.2 billion) financing from the Industrial Commercial Bank of China for the project, and was negotiating with local banks for a US$300 million loan. The project is valued at US$2 billion and will be financed through debt (US$1.5 billion) and shareholder equity ($500 million).[14]

In July 2016, Standard Bank of South Africa and Industrial and Commercial Bank of China (ICBC) agreed to jointly fund the US$300 million that was needed to close the deal. ICBC has a 20% stake in Standard Bank.[37] However on October 16 2017 Standard Bank said it will not fund the proposed coal-power plant in Lamu.[26]

In August 2017, it was reported that the African Development Bank (AfDB) was considering funding amounting to US$100 million as well as guarantees of a similar amount for the construction of the power plant.[26] However, in November 2019, AfDB said it will not fund the plant and "has no plans to finance new coal plants in the future".[38]

In November 2020, ICBC also decided to withdraw its financing from the project.[39][40]

In December 2022, Centum Investments officially wrote off its US$16.39 million investment in the project. The carrying value of the investment had dropped to zero in the 2019/2020 financial year.[41]

As of October 2022, nearly a thousand acres of land set aside for the project had not been reallocated. Over 600 farmers were affected by the project, and they were advocating for the land to be returned to local ownership. A chairman from the Kwasasi Farmers Association claimed that the farmers had not been compensated for their land, and project officials were unresponsive regarding the status of the site.[42] 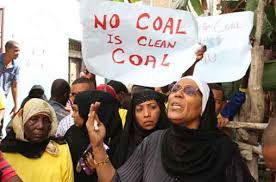 The power station has been met with fierce opposition from climate justice organizers, youth, farmers, women, and others for years.[43]

For example, in 2015, local residents started a petition calling on Lamu Governor Issa Timamy to stop the coal project. According to the Sierra Club, the proposed Lamu plant was not planning to employ the best available technology to limit pollution, and it would begin operation without Selective Catalytic Reduction (SCR) to reduce nitrogen oxides. The proposal was also home to the World Heritage listed Lamu Old Town.[44]

A 2015 report on the area from Unesco’s World Heritage Committee stated that “[t]here can be no doubt that a project of this scale and scope, in an area as remote and protected as Lamu, cannot help but have profound negative impacts on the heritage." Both Save Lamu and another group that were campaigning on the issue, Muslims for Human Rights (Muhuri), say they would take their concerns to court if the project was permitted.[17]

In 2016, the group Save Lamu presented the governor of Lamu county, Issa Timamy, with a signed petition to stop the project. Both Save Lamu and Muslims for Human Rights (Muhuri) feared the National Environmental Management Authority might not be fair with the project ESIA. “We sent our comments in November last year and to date we are yet to get a reply,” said Khadija Shekuwe, the research officer at Save Lamu.[17]

Last but not least, in May 2017, more than 10 local civil society groups held a peaceful protest against the project, marching silently around Lamu Old Town with placards and posters.[45]

Wikipedia also has an article on Lamu Power Project. This article may use content from the Wikipedia article under the terms of the GFDL.

Retrieved from "https://www.gem.wiki/w/index.php?title=Lamu_Power_Project&oldid=367145"
Categories:
This page was last edited on 7 December 2022, at 22:08.
Content is available under Creative Commons Attribution-NonCommercial-ShareAlike unless otherwise noted.
Privacy policy
About Global Energy Monitor
Disclaimers