The Lawe-Lawe Oil Pipeline is an operating crude oil pipeline.[1]

The pipeline runs from the the Lawe-lawe terminal in Balikpapan Bay, Borneo to the Balikpapan oil refinery.

The original pipeline of 20 in. diameter was owned and operated by PT Pertamina. After this pipeline was destroyed in an accident in March 2018 a secondary 16 in. pipeline was put into service, reducing capacity from 240,000 bpd to 150,000 bpd.[1] 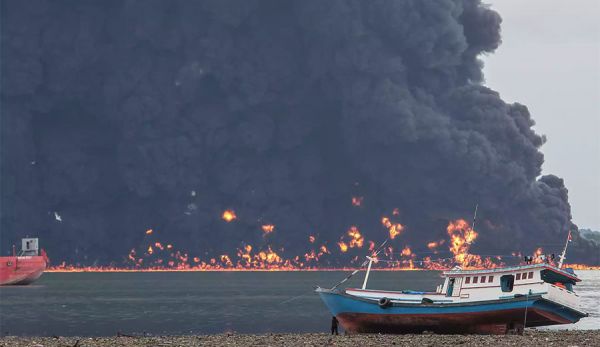 On March 31, 2018, a coal ship flying a Panamanian flag dropped and caught its anchor on the pipeline, dragging it and causing it to rupture and spill an estimated 40,000 barrels of oil.[3] “We believe this is the worst oil spill to catch fire since the 2010 Deepwater Horizon disaster,” said Fathur Roziqin Fen, director for East Kalimantan for WALHI, Indonesia’s largest environmental organisation. As of April 2018 it was reported that five fishermen had been killed in the fire, over 100 fishermen had lost their livelihoods, 17,000 hectares of mangroves were at risk, crab farms worth billions of Rupiah had been destroyed, and Irawaddy dolphins were dying from the pollution of the bay.[2] In February 2019 the Master of the ship that caused the crash was sentenced to ten years in prison.[4]

Retrieved from "https://www.gem.wiki/w/index.php?title=Lawe-Lawe_Oil_Pipeline&oldid=234009"
Category:
This page was last edited on 30 April 2021, at 11:01.
Content is available under Creative Commons Attribution-NonCommercial-ShareAlike unless otherwise noted.
Privacy policy
About Global Energy Monitor
Disclaimers