In Louisiana, fracking is being used to access natural gas in the Haynesville Shale area in northwestern Louisiana, and to a lesser extent for oil in the Tuscaloosa Marine Shale that stretches across the middle part of the state.[1] 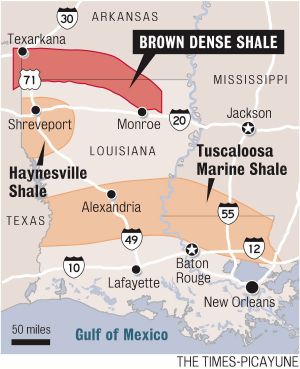 In Louisiana, fracking is being used for the natural gas producing Haynesville Shale area in northwestern Louisiana and the Tuscaloosa Marine Shale that stretches across the middle part of the state and contains what is called Louisiana Light Sweet crude oil.[2] The Brown Dense shale area underlying Arkansas and northern Louisiana (ranging in vertical depths from 8,000 to 11,000 feet) is projected to be able to produce both oil and gas, the industry say it is too early to tell how much of the hard-to-reach oil is recoverable.[3]

Fracking in the 11,000-feet-deep Haynesville Shale in Louisiana started in northwest Louisiana in 2008.[4] Since then over 2,200 wells have been drilled and are producing natural gas in the Haynesville Shale formation, with another 232 wells there awaiting completion, in the process of being drilled, or permitted (as of May 2013).[5]

Another 16 producing wells have been drilled in the Tuscaloosa Marine Shale formation, which cuts across the center of the state. The formation underlies St. Tammany, Washington, and Tangipahoa parishes, as well as the parishes surrounding Baton Rouge.[5]

Baton Rouge is home to the fourth largest refinery in the U.S. This ExxonMobil refinery processes more than 500,000 barrels of crude oil a day and sits on 2,100 acres.[6]

By the late 1980s, major oil firms had largely sold their onshore assets to small independents, and moved their non-refinery operations offshore.[7]

The Jurassic Haynesville Shale of northwest Louisiana has been a site for gas production since 1905, but has become a site for fracking since Cubic Energy drilled a well there in November 2007, followed by a March 2008 announcement by Chesapeake Energy that it had "completed" a Haynesville Shale gas well.[8]

Cameron LNG is a wholly owned subsidiary of Sempra Energy (SRE), a California-based natural gas distribution and marketing company. It is a liquefied natural gas (LNG) receipt terminal situated on a 260-acre industrial-zoned site along the Calcasieu Channel in Hackberry, Louisiana. It is located 18 miles from the Gulf of Mexico and within 35 miles of five major interstate pipelines that serve nearly two-thirds of all U.S. natural gas markets. Construction at Cameron LNG started in August 2005 and commercial operations began in July 2008.[9]

On January 17, 2012, the U.S. Department of Energy authorized Cameron LNG to export liquefied natural gas. The permit allows Cameron to ship up to 1.7 billion cubic feet a day of LNG to countries possessing free-trade agreements with the U.S. The permit is valid for 20 years after the first export shipment.[10]

In February 2014 the DOE allowed Cameron LNG to export gas to countries that do not have a free-trade agreement with the United States.[11]

In June 2014, the U.S. House of Representatives passed a bill 266 to 150 that will speed up the process of liquefied natural gas exports. The bill, sponsored by Rep. Cory Gardner (R-CO), allows the Department of Energy a mere "30 days to approve LNG exports to non-Free Trade Agreement countries after an environmental review of the LNG facilities.[12]

Construction is expected to begin in 2012, with LNG exports to begin in 2015. Cheniere has signed a contract with Bechtel Oil, Gas and Chemicals Inc. to build the facilities. Cheniere said it has signed LNG supply contracts with utilities in the United Kingdom, Spain, South Korea, and India -- Cheniere has Energy Department license to ship domestic gas to nations that are not U.S. free-trade partners. U.S. gas producers will have the capacity to export up to 18 million tons of LNG annually, worth about $1.7 billion at current prices.[13]

It was FERC’s first authorization of a project of this kind, FERC said in an accompanying statement: “Today’s order finds that the project can be constructed and operated safely and with minimal environmental impacts."[13]

In its Sabine Pass order, FERC settled on the DOE's earlier findings that increased LNG exports "will result in increased production that could be used for domestic requirements if market conditions warrant such use, and this will tend to enhance U.S. domestic energy security." FERC also dismissed charges by the Sierra Club and the Gulf Coast Environmental Labor Coalition that the commission shortchanged its environmental and safety reviews, citing conditions that Cheniere comply with the federal Clean Air Act, including rules governing greenhouse gas emissions and the use of "best available" pollution control technology.[1]

Trunkline LNG provides terminal service for shippers by receiving LNG at the facility for storage and delivering such LNG to shippers, either in liquid state or gaseous state after regasification.[14]

A confidential industry study from 1990, conducted for the American Petroleum Institute, concluded that “using conservative assumptions,” radium in drilling wastewater dumped off the Louisiana coast posed “potentially significant risks” of cancer for people who eat fish from those waters regularly.[16]

The Bluegrass Pipeline—put forward as a joint venture by Williams Companies Inc. and Boardwalk Pipeline Partners, LP—would carry an estimated 200,000 to 400,000 barrels a day of natural gas liquids (NGL) from western Pennsylvania to Texas, and would convert a portion of Texas Gas in Eunice, LA (the TGT Loop Line) to NGL service. NGLSs ("wet" natural gas) include ethane, butane, propane, methane, and various solid chemicals, which would likely be shipped to overseas markets. Unless maintained under high pressure, the substances are highly flammable and explosive, necessitating construction of additional facilities throughout the South—including a facility in Louisiana. Construction is expected to be completed by late 2015.[17]

A 2015 Stanford study found that Louisiana, Arkansas, West Virginia, and Pennsylvania had the highest average water use per each hydraulic fracturing job.[18]

Drilling and brine mining is often considered the cause of the salt dome collapse that caused the Bayou Corne sinkhole 40 miles south of Baton Rouge. The sink hole swallowed 15 acres. By 2014 it grew to 32 acres. Most of the residents living in the area have relocated.[19]

On October 20, 2011, the Louisiana Department of Natural Resources adopted new rules for the oil and gas industry (fracking regulation are on page 3064). The new rules require an operator to obtain a work permit before engaging in hydraulic fracturing, and to publicly disclose the content of the fluids they use in the fracking process, although it allows exemptions for chemicals deemed "trade secrets."[20]

Retrieved from "https://www.gem.wiki/w/index.php?title=Louisiana_and_fracking&oldid=234206"
Categories:
This page was last edited on 30 April 2021, at 11:01.
Content is available under Creative Commons Attribution-NonCommercial-ShareAlike unless otherwise noted.
Privacy policy
About Global Energy Monitor
Disclaimers